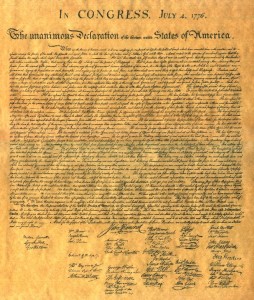 Danielle Allen, a professor at the Institute for Advanced Study in Princeton, N.J., is claiming that, for 238 years, everyone has been misreading the Declaration of Independence. According to her, a floating period, missing from some drafts but not from others, establishes that the Founding Fathers believed that it was the government’s, not the individual’s, responsibility to make sure we get our self-evident rights of “life, liberty, and the pursuit of happiness.”

The error, according to Danielle Allen, a professor at the Institute for Advanced Study in Princeton, N.J., concerns a period that appears right after the phrase “life, liberty and the pursuit of happiness” in the transcript, but almost certainly not, she maintains, on the badly faded parchment original.

That errant spot of ink, she believes, makes a difference, contributing to what she calls a “routine but serious misunderstanding” of the document.

The period creates the impression that the list of self-evident truths ends with the right to “life, liberty and the pursuit of happiness,” she says. But as intended by Thomas Jefferson, she argues, what comes next is just as important: the essential role of governments — “instituted among men, deriving their just powers from the consent of the governed” — in securing those rights.

“The logic of the sentence moves from the value of individual rights to the importance of government as a tool for protecting those rights,” Ms. Allen said. “You lose that connection when the period gets added.”

So, according to Allen, the Founders weren’t committed to individual liberties. Instead, they were statists who wanted to vest power in the government, not the individual.

Let me just say as a predicate that the Founder’s own behavior when the established the Constitution and the Bill of Rights puts the lie to Allen’s contention.  Had they been the statists she believes, they never would have established a limited government in the first place, one made even more limited when the Bill of Rights vested in the people specific powers that should have made the government, at all times, subordinate to the people.

The best way, of course, to determine the author’s intent, is to ask the author. Thomas Jefferson may have been dead 189 years, but he’s left us a document in which he compares his original draft of the Declaration (his preferred version), with the one that Congress eventually enacted.  This document is Jefferson’s 1821 autobiography, in which he carefully spells out how the Declaration came into being.

Here is the pertinent material from Jefferson’s autobiography:

Congress proceeded the same day to consider the declaration of Independance [sic] which had been reported & lain on the table the Friday preceding, and on Monday referred to a commee of the whole. The pusillanimous idea that we had friends in England worth keeping terms with, still haunted the minds of many. For this reason those passages which conveyed censures on the people of England were struck out, lest they should give them offence. The clause too, reprobating the enslaving the inhabitants of Africa, was struck out in complaisance to South Carolina and Georgia, who had never attempted to restrain the importation of slaves, and who on the contrary still wished to continue it. Our northern brethren also I believe felt a little tender under those censures; for tho’ their people have very few slaves themselves yet they had been pretty considerable carriers of them to others. The debates having taken up the greater parts of the 2d 3d & 4th days of July were, in the evening of the last, closed the declaration was reported by the commee, agreed to by the house and signed by every member present except Mr. Dickinson. As the sentiments of men are known not only by what they receive, but what they reject also, I will state the form of the declaration as originally reported. The parts struck out by Congress shall be distinguished by a black line drawn under them; & those inserted by them shall be placed in the margin or in a concurrent column.

[Editors note: text in boldface was removed for the final version of the Declaration, and text in italics was added].

A Declaration by the Representatives of the

United States of America, in General

When in the course of human events it becomes necessary for one people to dissolve the political bands which have connected them with another, and to assume among the powers of the earth the separate & equal station to which the laws of nature and of nature’s God entitle them, a decent respect to the opinions of mankind requires that they should declare the causes which impel them to the separation.

We hold these truths to be self-evident: that all men are created equal; that they are endowed by their creator with inherent and [certain] inalienable rights; that among these are life, liberty, & the pursuit of happiness: that to secure these rights, governments are instituted among men, deriving their just powers from the consent of the governed; that whenever any form of government becomes destructive of these ends, it is the right of the people to alter or abolish it, & to institute new government, laying it’s foundation on such principles, & organizing it’s powers in such form, as to them shall seem most likely to effect their safety & happiness. Prudence indeed will dictate that governments long established should not be changed for light & transient causes; and accordingly all experience hath shown that mankind are more disposed to suffer while evils are sufferable, than to right themselves by abolishing the forms to which they are accustomed. But when a long train of abuses & usurpations begun at a distinguished period and pursuing invariably the same object, evinces a design to reduce them under absolute despotism, it is their right, it is their duty to throw off such government, & to provide new guards for their future security. Such has been the patient sufferance of these colonies; & such is now the necessity which constrains them to expunge [alter] their former systems of government. The history of the present king of Great Britain is a history of unremitting [repeated] injuries & usurpations, among which appears no solitary fact to contradict the uniform tenor of the rest but all have [all having] in direct object the establishment of an absolute tyranny over these states. To prove this let facts be submitted to a candid world for the truth of which we pledge a faith yet unsullied by falsehood.

So, parsing the sentence, what does the colon mean?

Traditionally, aside from following the salutation in a business letter, colons have four primary usages. Wikipedia has as good a summary as any:

The colon introduces the logical consequence, or effect, of a fact stated before.

There was only one possible explanation: the train had never arrived.

In this sense the colon introduces a description; in particular, it makes explicit the elements of a set.

I have three sisters: Daphne, Rose, and Suzanne.

The colon introduces an appositive independent clause. In other words, the sentence after the colon is in apposition (grammatically parallel) to the one before the colon. Please note that this could also be simply considered an explanation of why Bob could not speak, and written without the capital He after the colon. Both would be technically correct.

Like a dash or quotation mark, a segmental colon introduces speech. The segmental function was once a common means of indicating an unmarked quotation on the same line. The following example is from the grammar bookThe King’s English:

Benjamin Franklin proclaimed the virtue of frugality: A penny saved is a penny earned.

This form is still used in written dialogues, such as in a play. The colon indicates that the words following an individual’s name are spoken by that individual.

Slut: Doctor, I feel like a pair of curtains.
Doctor: Because you’re always open!

So let’s break down that all important clause as Thomas Jefferson himself wanted it to be, with a colon.

The colon could mean a syntactical-deductive, meaning that the words following “life, liberty and pursuit of happiness” are the logical consequences of that phrase:

We hold these truths to be self-evident, that all men are created equal, that they are endowed by their Creator with certain unalienable Rights, that among these are Life, Liberty and the pursuit of Happiness. The logical consequence of these unalienable rights is that, in order to ensure that they are given proper deference is the men create governments, the sole authority of which comes from men willingly subordinating themselves to a government entrusted to ensure life, liberty and the pursuit of happiness. This means that, if the government ceases to serve this function, it is a failed government, which the people can abolish.

The colon could mean a syntactical-descriptive, meaning that the words following “life, liberty and the pursuit of happiness” expand upon and explicitly define the preceding clause. This grammatical usage, however, which is most closely aligned to Allen’s interpretation, actually reduces the sentence to nonsense:

The colon could be introducing an appositive, independent clause, which an artsy way of tying somewhat independent thoughts together using grammatical parallelism. This makes for hideous, awkward writing, but again makes clear that government is subordinate to man, meant to sustain him, not control him:

We hold these truths to be self-evident, that all men are created equal, that they are endowed by their Creator with certain unalienable Rights, that among these are Life, Liberty and the pursuit of Happiness: [The Creator said] “That to secure these rights, Governments are instituted among Men, deriving their just powers from the consent of the governed, — That whenever any Form of Government becomes destructive of these ends, it is the Right of the People to alter or to abolish it, and to institute new Government….”

A. All men are created equal

B. The Creator endows all men with certain unalienable Rights, which include, but are not limited to:

3. The pursuit of Happiness

B. Limitations on these man-created governments:

1. They exist to preserve self-evident truths

2. They have no power independent of that which men vest in them.

3. If they fail to protect self-evident truths (and presumably, if they seek to destroy those truths), men can

a. Alter the government

b. Abolish the existing government and create a new one that exists to serve man

Again, the above is just grammatical game-playing. The Constitution, which establishes a very limited representative government, with power doled out amongst three branches, so as to prevent the tyranny of any single branch; and the Bill of Rights, which establishes vast zones of human behavior that government cannot touch, establish unequivocally that Jefferson’s “colon” was intended to protect individuals, not to make them subordinate to the government.