Last night we watched the most recent episode of John Oliver’s new HBO show, Last Week Tonight. I was interested in what Oliver’s take would be about the two top news events of the past week: Hamas’s terrorist action and Israel’s military response; and the refugee crisis on America’s own border.

Oliver, however, ignored both those stories, choosing instead to focus on “income inequality.” (Ashley Dobson fisks the segment nicely, exposing all of the factual and logical errors in his attack on American capitalism.)

The income equality stuff was the typical moronic shtick, which always sounds ridiculous coming out of the mouth of someone earning at least six figures a year. The absence of any discussion about the top stories was more interesting.

It occurred to me that Oliver could not comment on either story because he couldn’t risk saying what he and his audience really think: As far as they’re concerned, both Israel and America’s border should disappear. It’s one thing to speak these truths in a quiet room; it’s another thing entirely to put them on TV where others might be listening.

In this case, the “others listening” are the majority of Americans who support Israel and are horrified by the unfolding crisis on America’s southern border. It’s better to be thought a hardcore Leftist than to open your mouth and confirm it, right?

As for me, I’m not ignoring those stories. They are defining stories that will shape both the Middle East and America for some time to come. So, follow me into the wonderful world of actual news, rather than HBO’s fairy and unicorn land where a hard-Left, Cambridge-educated millionaire media star cries crocodile tears about “income inequality.”

By the by, the big issue shouldn’t be “income equality,” it should be “education inequality.” That’s not an issue that the DemProgs want to tackle, though, because it’s a direct result of the way in which America’s public schools have been turned into union fiefdoms. We can only hope that the California court ruling holding that tenure is unfair to students will weaken that stranglehold.

With all the dreadful headlines lately (border, Israel, ISIS, economy, etc.), I have to admit that the thing that strikes the most fear in my heart is the possibility that Elizabeth Warren could be a viable candidate for the White House and a possible winner thanks to her populist attacks on Wall Street. Unlike Obama who was a covert demagogue, she’s an overt demagogue and, for that reason, a very scary person. If she’s elected, it will speak to a profoundly damaging trend in American presidential politics.

Back in the dark, pre-gay rights era, Alfred Kinsey claimed that 10% of the American population was homosexual. Over the decades, many people challenged that number. After all, much of Kinsey’s research was done in prison populations and among gay prostitutes. More than that, many of Kinsey’s interviewers (including Kinsey himself) were gay or bisexual. To the extent they interviewed people in their own circles, this skewed the numbers. A recent poll, taken in a time of open homosexuality, probably offers a much more accurate number: less than three percent of Americans self-identify as gay, lesbian, or bisexual.  I leave you to your own conclusions about what that number means in the context of today’s hot societal issues.

It takes a surprisingly small vector to tilt a healthy population into being a plague-ridden population. There’s reason to believe that the dissemination throughout the US of infected children may be that vector. It takes true cognitive dissonance to ignore this reality (and to make that point, I’ll run yesterday’s poster again today): 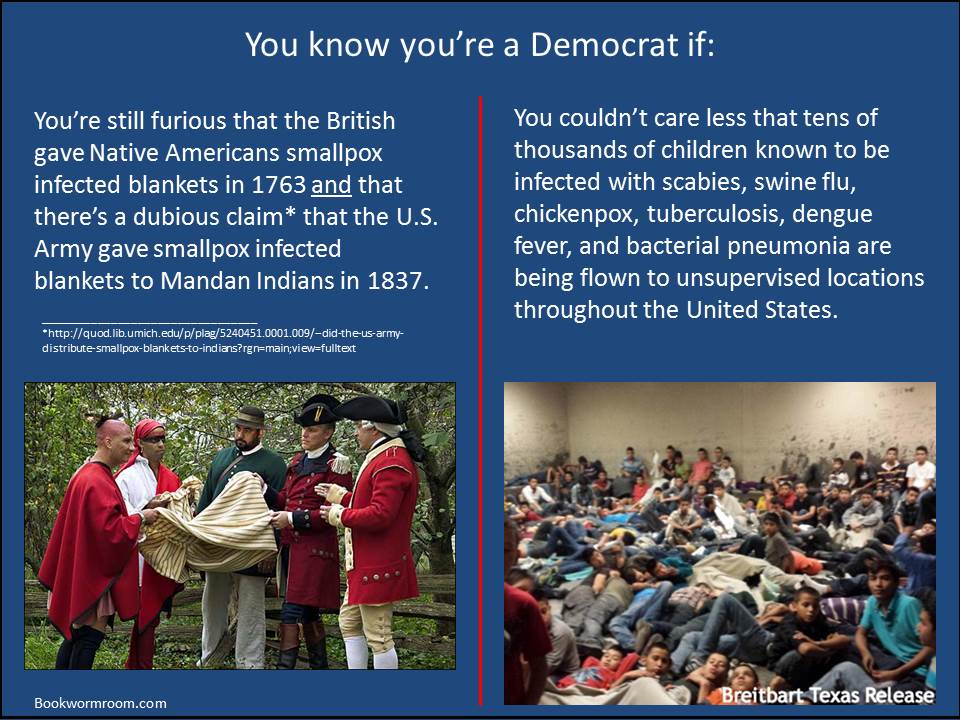 I noted already last week that the Left is accusing Christians of lacking compassion because they want to stop the flood of youthful refugees into America. Meanwhile, Glenn Beck has been oozing compassion for those refugees, which is why I’ve never liked him very much. It’s not the compassion that I dislike; it’s the ooze. He’s a smart man, but he’s ruled by his passions, not his brain. He is, in effect, the male Oprah. But back to the refugees.

I’ve long said that America’s pro-illegal immigrant cadre is inflicting cruel and profound damage on Latin America. As long as we provide a safety valve through our acceptance of illegal immigration, Latin America’s corrupt, inefficient governments and broken economic systems can thrive. They lose criminals, excess population, and non-producers (such as children), while gaining billions in American dollars their emigrants sent back home. What’s happening now on our southern border is this cruel system playing out on a massive scale.

Worse, at home, we’re losing the rule of law. The most compassionate system of all is one that’s free and based upon a reliable and just legislative and judicial system.  In that system, people don’t fear the past, can work in the present, and can plan for the future. The Obama-engineered refugee crisis is destroying that too.

And it will get worse, because there’s every indication that Obama intends to grant mass amnesty to the refugees. He won’t do this by waving the presidential wand and pronouncing “I hereby grant every illegal immigrant amnesty.” He will, instead, do it by refusing, once again, to enforce any of the nation’s existing immigration laws. Doing so will satisfy several important Obama constituents, even as it destroys the US.

One would think that Obama would care that, by doing so, he’s hurting one of his core constituencies:  Blacks.  Blacks are horrified by the influx of people who will compete with them for low wage jobs and welfare. Obama couldn’t care less, though. What blacks need to understand is that Obama is not really black. He’s red — a hardcore Marxist whose primary goal is the destruction of America, which long stood as the bastion of freedom against Marxism. Blacks were just one more in a long list of useful idiots.

Should Obama grant de facto amnesty by refusing to enforce the law, that will be a manifestly impeachable offense, of course.  Sadly, the majority of Americans still don’t want to impeach the first half-black president.

Senator Jeff Sessions is doing his best to rally Congress and Americans to this grossly unconstitutional act, but he’s not getting traction because the drive-by media supports Obama’s political goals.

You’ve already heard that Israel agreed to a ceasefire and Hamas refused. Yay!

That’s not a sarcastic “yay.” I’m thrilled, because that little Kabuki play allowed Israel to prove her good faith and Hamas to prove its bad faith. More than that, Israel is winning. She would be insane to engage once again in her usual practice of snatching defeat from the jaws of victory by giving up the instant she makes headway against the genocidal Islamic terrorists gunning for her.

And why is Israel winning? Elliott Abrams notes that Iron Dome has heartened the Israelis, that Hamas is making no headway and that, aside from a rise in antisemitic attacks across the world, nobody of importance is rallying to Hamas’s side. Egypt hates Hamas, and the rest of the Arab world is too involved in its own immolation to care about one more branch of the Muslim Brotherhood.

On the subject of Israel, please, please read Daniel Greenfield’s discussion about the nature of Israel’s (and the West’s) response to terrorism. She may finally have to abandon the appeasement approach she’s used for so long.

The Huffington Post (of all places!) has published a fantastic opinion piece destroying the notion that Israel and Hamas are morally equivalent.

Rob Miller provides a first person account of the anti-Israel rally in Los Angeles, which ended with a DHS officer firing a shot when pro-Palestinian protesters got violent (as they invariably do).

If I had my way, every Jew would be required by Jewish law to (a) own a gun, know how to operate it, and carry it on his or her person at all times; and (b) have basic knowledge of hand-to-hand combat techniques.

Americans used to view the government as their servant; now they cringe before it as their master. Nowhere is this more apparent, funnily enough, than in the realm of local government.

I say “funnily enough” because the news is full of stories about overreaching federal, not local, government.  In reality, though, the federal government doesn’t directly touch many people, while local government does. We here in Marin just had our own fight with a local government that wanted to add 900 apartment units along a two lane major artery between two highways. And anyone who has had to deal with a town inspector knows how those departments can abuse their power. Reagan knew how to deal with this problem.

Ted Cruz has suggested impeaching Eric Holder. Holder’s most recent attack on free speech — having the DOJ investigate an anti-Obama Zombie parade float — makes it clear that Holder is a ripe target. If only Holder didn’t have that cafe au lait skin and his solid Marxist credentials, it would be a slam dunk.

Mr. Bookworm is cheap, a quality I admire because I’m cheap too. I was, and he is, a wage slave, which means our money will never grow exponentially. If we’re to have any savings in our old age, we actually have to save money to make that happen.

We still have a great lifestyle: a lovely home, electronics, vacations (Mr. Bookworm’s passion), reliable cars, etc. However, we shop sales, use coupons, and are careful to distinguish between things we want (which must be justified) and things we need (which must be bought as economically as possible).

One aspect of our cheapness is that we don’t waste gas or electricity. After all, the more you use, the more you pay. That’s why, when I met Mr. Bookworm long before anyone had thought of global warming, we conserved energy.

Nowadays, Mr. Bookworm insists that he conserves energy not to save money but because he’s “green.” He’s lying to himself. I know this because, whenever we go on vacation, when a hotel or cruise ship is paying for energy consumption, he’s incredibly profligate with natural resources, most notably when it comes to towels. He’s been know to go through 5-6 clean towels a day on vacation.

I’ve now learned that Mr. Bookworm is not alone in telling lies to himself about his energy consumption and green self-righteousness.

The Left loves to ridicule those on the right who, usually because of religious beliefs, have ideas that are outside of the mainstream. For example, they can’t get enough of the comedic wonders of the creationist theme park. Fine. It’s funny.

But part of the Left’s laughter, of course, is condescension. We would never be so stupid and irrational they reply.

To which Andrew Klavan says, “Really? You’d never be wacky, stupid, and irrational? Think again.” (Klavan doesn’t actually use those words, but it’s definitely the gist of this great post about Leftist lunacy.)