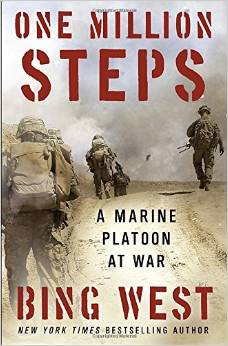 . I was fortunate enough to get a review copy and would like to share my impressions with you.

West, a Marine veteran who served in Vietnam, has now added a sixth book to his series about the war in Iraq and Afghanistan. In One Million Steps, he describes his experience when he was embedded with a Marine platoon in the Sangin distinct of Afghanistan during a six month period covering 2010 to 2011. As with all of West’s books, it is extremely well-written. West is a master of lyrical simplicity, something that fits very well with the way in which his book pulls us into the lives of the young Marines struggling to take back territory from the Taliban in the Sangin province of Afghanistan.

The Marines who fought these daily battles won’t be remembered in the same way as the Marines who fought at Iwo Jima or Guadalcanal.  This historical amnesia won’t arise because of any Marine failings, though.  As has been true for generations of Marines before them, the Marines in Battalion 3/5 sacrificed themselves mightily. Their battalion suffered the greatest losses of any unit in Afghanistan.  These sacrifices, however, will gain no traction in the public imagination because this is an unusual war.  While Marines fight to win, 21st century rules of engagement, combined with Obama’s political calculus, placed these Marines in an untenable situation, where winning was impossible.  Unlike previous wars, where even a lost battle, if fought with sufficient bravery, could imbue other fighters with the will to win, in Afghanistan victory was the true No Man’s Land.

As West ably explains, the Marines were ordered to an area of Afghanistan that Britain, which had previously tried to occupy it, had basically ceded to the Taliban. The British left the Americans a single fortified area surrounded by the Taliban; by farmers who were both victims of and collaborators with, the Taliban; and by thousands of IEDs buried in land that was an inhospitable combination of canals, marshes, primitive compounds, and small open fields surrounded by dense foliage. The correct way to have subdued this region, of course, would have to take every piece of modern land and air technology available and go in with guns blazing — perhaps preceded by Israeli-style warnings to non-combatants that they should vacate the land or prepare to die.

What happened instead were Sisyphean Rules of Engagement (“ROEs”) that prohibited Marines from firing offensively, instead limiting them to defensive fire after they’d already run the risk of casualties. Worse, if the Marines sought to engage in any more than a running skirmish in response to shots fired while they were out on patrol, a battalion, not of fellow warriors but of lawyers, had to review the proposed fight plan first to make sure that it didn’t violate the ROEs.  Even knowing about this bureaucratic, legalistic twist on warfare, reading about it in One Million Steps is still a shock.  It’s just mind-boggling that lawyers were calling the shots in a genuine ground war (as opposed to the lawyer’s usual field of battle — a courtroom). Wars are fluid, dynamic situations; lawyers are stolid, cautious, and risk-averse. To make fighters in the war dependent on lawyers is insane.

Even worse for the Marines in Sangin was that they were fighting under a Commander-in-Chief who was committed to defeat and retreat. That these young men willingly put themselves in the line of fire every day, day after day, under the most dreadful circumstances, all in service of a Commander who had already erased the word victory from his vocabulary, and who would soon spell out for the enemy the exact date and circumstances of the surrender is another mind-boggler.

Despite the adversity pressing down on them, the Marines in Battalion 3/5 never lost their commitment to the Marine ethos. Whatever the job demanded of them, no matter how pointless, quixotic, or dangerous, they would do their best to get the job done. Using a combination of brute strength, craftiness, and moral and physical courage, all under the umbrella of masterful leadership that encouraged both team playing and personal responsibility, they went out every single day through hostile Sangin territory and killed the Taliban in a perpetual game of whack-a-mole .  .  . only in this game, the mole was doing its best to whack back.

One of the strengths of West’s writing is his own service as a Marine forty-years before. West has a visceral understanding of what faces a grunt fighting an often chimerical enemy who observes no rules of war; who has the entire untouchable civilian community under his thumb; and who has had years to prepare the ground for war in the enemies’ favor. Although West’s language never becomes heated or bombastic, his descriptions of the Marines’ circumstances are vivid, realistic, and manifestly accurate. West is manifestly not a desk jockey suddenly playing with the big boys.

West also conveys admirably the strong connection between the individual Marines, all of whom are stuck in the middle of nowhere, seeing their comrades fall in often fatal and always devastating welters of blood, and putting their lives on the line every day. While these young men’s peers are at college, or holding down jobs, or just slacking off, these men, all of whom are volunteers, are living by the rules their much-admired Sargeant Matt Abbate wrote on a piece of plywood that he then hammered onto a wall:

1) Young warriors die
2) You cannot change Rule #1
3) Someone must walk the point (where you are sure to die)
4) Nothing matters more than thy brethren . . . thou shalt protect no matter what
5) Going out in a hail of gunfire . . . pop dem nugs until they body runs dry of blood . . . AND LOOK HELLASICK

Another great virtue of West’s writing is that each of the young men he mentions, even if only briefly, is a real person. West is not a Marxist who sees soldiers as cogs, units, victims, representatives of their race or class, statistics, or any other socialist group designation. To him, each is an individual with a name and a story. Moreover, to the extent too many of these young men died, each is a person who deserves the dignity of being remembered once more as the person he was, someone with hopes, family, and plans for a future that was never realized.

One Million Steps often makes for painful reading because we are seeing a tragedy play out in real-time. At the national level, the Marines were contending with two administrations that were, and have continued to be, terrified of the prospect of fighting a full-blooded war.  Worse, the second of these two administrations was frightened even of the possibility of victory. Serving on the ground under this schizophrenic, neurotic, diffident, sclerotic bureaucracy were men who, for whatever reason (a thirst for adventure, a fear of boredom, a craving for the camaraderie that only military services brings), chose to fight in an army governed by fear, constrained by counter-productive rules, and opposed to victory. There is no way this could end well.

Nevertheless, uncomfortable reading or not, Bing West’s One Million Steps: A Marine Platoon at War

is a book that deserves to be read. We need to read it to understand the nature of our enemy, even if our political class continues to turn a blind eye. We need to read it to appreciate that this country is still capable of producing men of high-caliber, discipline, commitment and bravery. And lastly, we need to read it because young men, tucked away in a forgotten corner of an unpopular war, deserve to be recognized for their courage and sacrifice.