Before I dive into my round-up, I wanted to discuss with you a poster that a very liberal friend of mine put up on Facebook. It’s the Leftist version of various posters you’ve seen here discussing Leftist logic (e.g., as Dixon Diaz says, “A liberal is someone who lives in a gated community but says that a border fence won’t work,” or “A liberal is someone who thinks that Fox news lies, but Obama doesn’t.”).  The Leftist version of this logic comparison involves voter ID and gun purchases: 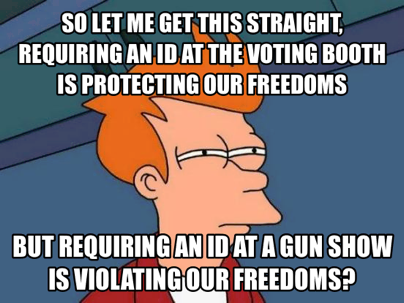 Superficially, the comparison makes sense. I mean, ID is ID after all. Why should it be required in one place and not in another? Only a second’s thought, though, makes it clear that this is a bit of prestidigitation, meant to make us look in the wrong direction.

What we should be looking at is the fundamental right we’re trying to protect.  In the case of voting, the fundamental right is the right to cast a vote that is not canceled out by an invalid vote from someone who, as a matter of law, cannot vote, whether because that person is actually dead, or is an illegal alien, or is a felon, or just hasn’t bothered to register.  Demanding identification protects the integrity and weight of my legal vote.

The opposite is true for the requirement that one must show identification at a gun show.  The right to bear arms is the fundamental right at issue.  Putting government regulations between an individual and a gun is a burden on the exercise of that right.  This is not to say that the state may not place that burden, but the state had better  have a damn good reason for doing so.

So — is anyone out there skilled enough to reduce my argument to a poster that will counter the poster above?  For the life of me, I cannot figure out an easily digestible way to counter a fallacious, but superficially appealing, argument.

It seems appropriate after discussing the fundamental right to bear arms to lead off with a news report about an Army vet, carrying a licensed gun, who used his gun to save both his girlfriend and himself from a frightening attack by a deranged individual. Here’s the takeaway quotation:

“I firmly believe that in order to maintain a free society, people need to take personal safety into their own hands,” he said. “You should walk around ready and able to protect yourself and others in your community.”

Modern Islam flows from Saudi Arabia and Iran, and both are barbaric

Daniel Greenfield pulls no punches in “The Savage Lands of Islam.” With a focus on Saudi Arabia (along with nods to Iran) he explains that Islam, as practiced in the countries that are its heartlands, is an utterly barbaric religion that debases human beings. He also warns that Islam exists, rather like a parasite, to take over other countries and reduce them to precisely the same debased status. Or as I once said: 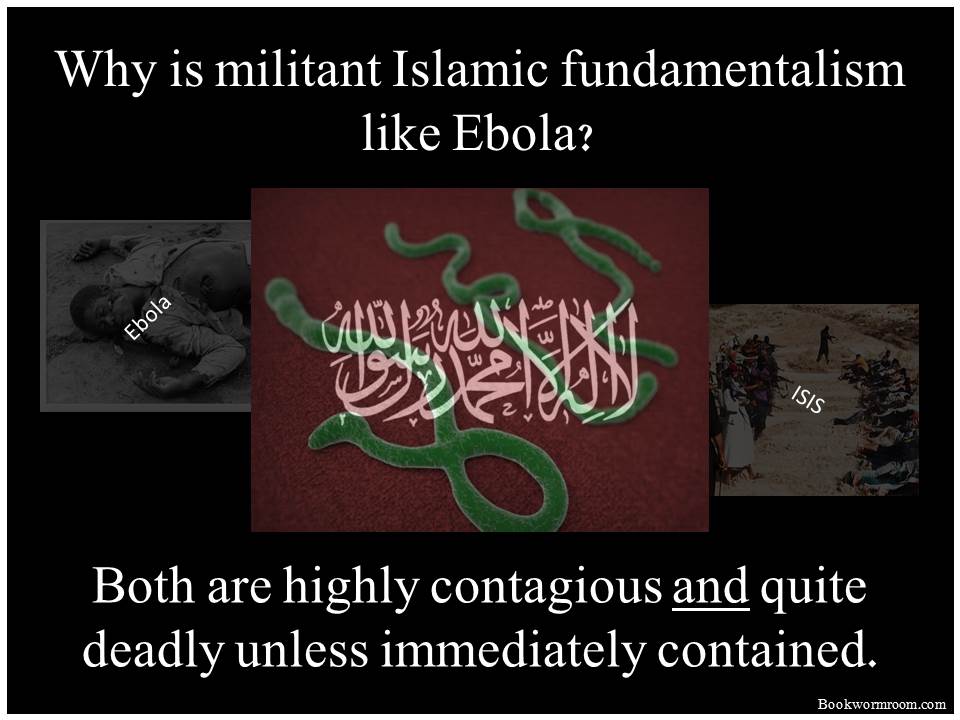 England continues voluntarily to plunge itself into the moral abyss

By a vote of 60 to 1, the student union at Goldsmiths College in London voted to discontinue all Holocaust commemorations. The reasons given were grotesque, starting with that given by the “education officer,” a gal named Sarah El-Alfy, which I read as an Arab name. According to her, Holocaust commemorations are “Eurocentric” and “colonialist.” Sadly, El-Alfy sounds marginally intelligent compared to students who opined that “The motion would force people to remember things they may not want to remember,” while another said that because the Union was (apparently appropriately) anti-Zionist, commemorating the Holocaust was impossible.

Honestly, I think the only time in modern history that a once civilized country so swiftly and completely debased itself was Germany, in the years between the end of WWI and the start of WWII. And, to England’s shame, Germany at least had the “excuse” of having been utterly destroyed, socially and economically, by having lost WWI. England’s slide into this abyss has no excuse, following as it does the fat years that Margaret Thatcher introduced and that continued through the 1990s.

England’s not alone: all of Europe is just as immoral

England didn’t sink into this moral black hole alone. All of Europe is there (with American Democrats tugging anxiously at the leash, desperate to plunge into the hole themselves).

How do we know this? Because Europe, England included, has decided to recognize the Palestinian state, despite the fact that there’s nothing state-like about the West Bank.  Well, there’s nothing state-like unless you redefine state to mean “a dysfunctional terrorist organization, with no infrastructure, no rights for women, Jews, Christians, Hindus, Buddhists, or gays, and that has no ability to generate revenue but simply funds itself with hand-outs from the international community, most of which end up lining the pockets of those clinging with tyrannical fervor to ‘leadership’ positions.”

And if that sentence was too packed to make sense, you can and should read Caroline Glick on Europe’s disgraceful move to recognize a Palestinian State.

When it comes to moral black holes, let’s not forget The New York Times

As part of the Left’s desperate effort to emulate Europe’s moral abasement, the New York Times is leading tours to Iran, no Israelis allowed, and all Jews and homosexuals seriously discouraged from coming along:

The New York Times is offering a pricey, 13-day excursion to the “once-forbidden land of Iran,” one of a series of its Times Journeys tours. However, if you’re an Israeli, joining the “Tales of Persia,” trip, “once-forbidden,” is still forbidden, and letting anyone know you’re Jewish, or gay, isn’t particularly recommended, either, a representative told The Algemeiner on Monday.

How very 1938 of the Times. Can’t you just see exactly the same tour being given to Nazi Germany by the Progressives at the Times, all of whom would be overflowing with admiration for a powerful state that gives universal healthcare, discourages smoking, and designs fuel-efficient cars?

Did you know Hitler was a meth head?

This may be old news to some of you (indeed, I remember vaguely reading it somewhere), but it’s still a shock to read about the scope of Hitler’s doctor-approved drug abuse:

According to a 47-page wartime dossier compiled by American Military Intelligence, the Fuhrer was a famous hypochondriac and took over 74 different medications, including methamphetamines.

He was initially prescribed a drug called Mutaflor in order to relieve the pain of his stomach cramps.

He was then prescribed Brom-Nervacit, a barbiturate, Eukodal, a morphine-based sedative, bulls’ semen to boost his testosterone, stimulants Coramine and Cardiazol, and Pervitin, an ‘alertness pill’ made with crystal meth-amphetamine.

One has to wonder how much all these drugs contributed to the paranoia and monamania that killed 40 million people, including 6 million Jews, in just six years.

No wonder conservatives are feeling apocalyptic….

The last couple of days have seen several conservative writers writing gloomy posts about America’s and the world’s slide into chaos, all under Obama’s aegis.

Roger L. Simon asks “Can It Possibly Get Any Worse?”

Stephen F. Hayes looks at the “Failure Upon Failure” of the Obama presidency. In theory, the article should make for satisfying reading for those of us who figured Obama out on the first day but it’s actually just terribly depressing, because Obama’s failure is America’s failure.

Ed Driscoll notes that the Left is getting downhearted too, in “The ‘Bam Who Fell To Earth.”

As long as men leave the toilet seat up, why marry?

In keeping with her attack on men, I’d like pick up on a theme I touched upon years ago, when I first started blogging. Looking at the people I know, the couples I know, and the blogs I’ve read, I’ve concluded that liberal and conservative men are very different in their approach to women.

Liberal men applaud women in the abstract — calling them equal or superior, bowing before their right to do anything they damn well please, and feeling the need to apologize all the time for being men. Given all this, perhaps it’s not surprising that, except for the sex part, liberal men don’t seem to like actual women very much. If you constantly have to abase yourself before someone, it’s kind of going to kill the fun. Certainly, in my world, the harder Left men are politically, the meaner they are to the real women in their real lives.

Conversely, while conservative men believe in equity feminism (equal pay for equal work, equal access to opportunities on a level playing field), they view women as different from them and special in their own way. I’ve never seen a respectable conservative male blogger denigrate women, just as I’ve never seen one pretending there’s no difference, that women are superior, or that all men must perpetually apologize for erroneous opinions that men in past generations held about women. Conservative men have a better handle on the fact that, in a pre-industrial, pre-scientific era (that is, everything before about 1850), there was no way in Hell to pretend that men and women were fundamentally equal. Conservative men also seem not just to love the women in their lives, but truly to respect them.

So it seems to me that, amongst the Left, which is still driving the culture, marriage is less popular because feminism has made it reasonable for men to dislike women, and therefore to treat them disrespectfully, which in turn leads women to dislike men.

Still, there is beauty….

Adilyn Malcolm describes herself as follows:

Hi, I’m Adi! I’m 11 years old and I love dubstep! I have NEVER taken a dance class in my life………I learned from watching (YouTube) videos!! I have been dancing for about 6 months. I am actually a motocross racer but when I’m not on my bike, this is the next best thing! I hope you enjoy my videos. Thanks for watching!

Although the following is only her second video, she already has 2,421 subscribers and 2,005,997 views. You’ll see why she got so popular so fast when you watch her dance:

And a few pictures in lieu of thousands more words

And, from Sadie (who provided the caption): 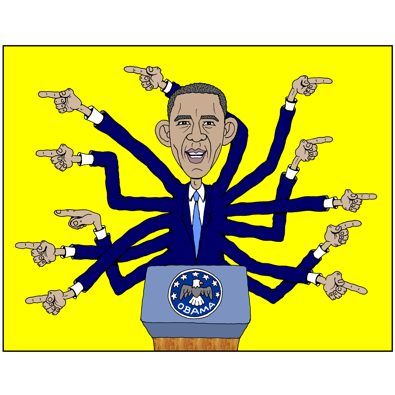