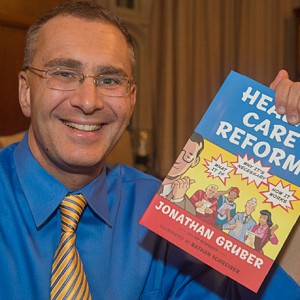 A Bay Area resident who reads my blog, asked that I publish an open letter to Dr. Jonathan Gruber.  Because the letter’s writer has to make a living here in Marin (70% Democrat), she’s writing under a pseudonym.  I’m betting that this letter will resonate with many of you:

I watched your panel discussion videos with fascination where you talk about creating Obamacare and how you needed to obfuscate and deceive in order to get it passed. I noticed how you hold the voting American public in contempt, saying how stupid we all are.

After viewing it I thought I would write to you to let you know how your important legislation for which you got paid $400,000 in consulting fees has affected my life. Because when I hear you speak about the voters of this country I don’t get the feeling that you have any understanding or empathy for us. I am sure you have more important things to think about.

At any rate, here is what your masterful plan has done. My husband and I bought our own health insurance for many years and we paid for it ourselves. In the fall of 2013 we received notice from our health insurance carrier that our plan was cancelled. The replacement plans were double the cost with higher deductibles for us and our two young kids. The price was more than we could afford. We looked on the state website, despite our reluctance to place our personal medical and financial information on a website that wasn’t worthy of a small town beauty shop. But, we determined that we weren’t eligible for any subsidies (or let’s just call them what they are) welfare entitlements. We had hope that our insurance carrier would come through and offer the plan again to us after the President changed his mind and said that those who had lost coverage could take a non-qualifying plan. Of course, anyone who runs a business knows that a large insurance company cannot just reverse itself on a dime like that. It sounded good on TV, but I don’t know anybody who was offered their old plan again. So, to cut to the chase, our family of four is now uninsured. A family that for years has been following the rules, paying our own way, and making sure we weren’t a burden to others now does not have affordable coverage.

I am sure this story bores you, and you assume that I am some Republican hack who is writing this to further an agenda. But I am just a regular middle class person who is trying to make it and you and your ilk continue to interfere with my life, making it harder and harder for me and my family. I actually used to be a Democrat, raised in a union family. I moved to San Francisco and gradually realized that with each Democratic administration there my costs were increasing and the amount of corruption and incompetence around me became unbearable. When the parking and traffic department got all new equipment paid for by the tickets they issued as part of their mandate to “keep traffic flowing in the city” while Muni still never ran on time and the streets remained filthy, I got fed up.

But here is the thing I finally realized, that the people elected to represent me and my fellow middle class workers and business owners are only representing themselves and their cronies. You and they have no idea, nor do you care whether your policies make my life worse. In your arrogance you just think you know better than all of us, and you line your pockets with our tax money. The political class gets richer and richer, while regular people get poorer and poorer. I am sure that at MIT you have a Cadillac healthplan not paid for by yourself, but by the students and their parents paying astronomical tuition. The congresspeople you worked with on this project also have very nice health insurance paid for by the taxpayers. I do not.

You have made my life worse, there is no doubt about it. Our family has been lucky over the years when we bought our own health insurance. We have been pretty healthy. When the kids had emergencies, we paid those bills. We paid for annual visits and dental work, etc. Even paying out of pocket for most things it was never close to the amount we were going to have to pay just for the insurance under Obamacare.

I know that you didn’t want to call the mandate a tax, because it wouldn’t have passed if you had been honest. Because the truth is that I can’t afford to pay an extra $5000 per year for someone else’s healthcare. I am busy trying to take care of my own expenses. I can’t afford to have my “wealth redistributed” to someone else. And you all wonder why the economy is not doing well and “stupid voters” are angry.

You could have done a few simple things to lower costs for everyone, like require doctors and hospitals to list their prices for each procedure or checkup. When you actually have to pay out of pocket for things it can be difficult to get pricing information to make an informed economic decision. Allow insurance companies to compete across state lines and don’t allow them to exclude people based on pre-existing conditions. I am sure the Democrats’ and Republicans’ health insurance donors and cronies wouldn’t have liked that, but they’ve been making profits hand over fist from my family for years. And don’t tell me what kind of coverage I need. I can figure that out on my own.

You chose to go the big government route and make an already flawed system worse. It’s sort of amazing to see how you managed to mess things up more than they already were. I used to think a 20% increase in price each year was the worst, but that was before Obamacare. The whole rollout reminded me of what happens when you put marketing people in charge of something that actually has to work — it is promoted well, but is incapable of actually doing what it is supposed to do.

I used to think that Americans were backwards compared to Europeans because we have less respect for intellectuals. Now I see the wisdom in this scepticism. The intellectuals and academics like you have no respect for us, and have no caring or understanding for the actual consequences of your actions for real people.

So, Mr. Gruber, when I have some costly healthcare need in the near future maybe I should just send my bill to you and Nancy Pelosi and you two can “redistribute” some of your considerable wealth back to me directly. It seems fair to me.

p.s. I apologize to all small town beauty shop website builders and all marketing people who are obviously much more competent than this administration.