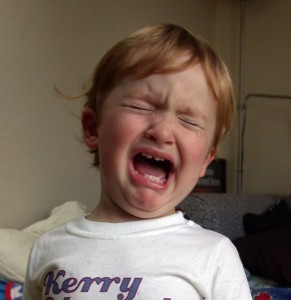 I’ve been thinking a lot about Leftists and toddlers. I should start with my biases: I absolutely hated it when my kids were toddlers. On the one hand, they were cute and it was exciting to see them develop as little people, soaking in the world like a sponge. After all, these were my little progeny.

On the other hand, dealing with a toddler’s greed, frustration, anger, impatience, resistance to toilet training, and temper-tantrums got old really quickly. The only useful thing about the whole experience was that it left me thinking that the Catholic Church is correct — we are born in sin and it takes an enormous amount of parental and societal effort and pressure to subordinate our innate wickedness and to replace it with civilized behavior.

As best as I can tell, Leftists are throwbacks to the toddler stage in human development which, as I hope I explained above, is not a good thing. I’ve already expounded in earlier posts about the Left’s passion for poop and all things disgusting, and its resistance to toilets. If that isn’t a serious regression to an early phase in the brain’s development, I honestly don’t know what is.

Every parent who’s seen a toddler play with the poop in her diapers or his little training potty is familiar with the way in which hardcore Lefties play with poop, and there’s nothing cute about it.  It’s an innate, disgusting, immature behavior that requires serious discipline, in and out of the home, to change.  Despite their parents and preschool teachers’ best efforts, Leftists clearly have regressed.

Unlike Leftists, the mature human does his best to remove fecal matter from center stage because (a) it smells foul and (b) it’s associated with disease. Even the Romans, who viewed the biological process of using the toilet as a social experience, nevertheless understood that the fecal matter itself should be removed and, to that end, they came up with remarkably sophisticated plumbing techniques.  The Left, however, revels in fecal matter, often using it as a form of communication, whether symbolically, through speech and images, or actually, as when they defecate on police cars or pictures, or carry buckets of fecal matter to distribute on property owned by disfavored people or entities.

The Left’s resemblance to toddlers doesn’t end with inadequate potty training. It extends to the Lefts’ relationship to property. Before I expand on this, are you familiar with the toddler’s creed? It’s a simple little poem, explaining how the toddler views the material things around him:

To explain how the Leftists have failed to develop beyond the toddler’s primitive conception of property (it’s all mine and none of it’s yours), you need to appreciate that Leftists don’t think in terms of wealth versus cash. To them, the two are synonymous.  You and I understand that wealth is the product of labor, innovation, creativity, investment, planning, etc., and that money is only a convenient, easy-to-carry and easy-to-trade symbol of these human investments.

The Lefts’ failure to make the distinction between money and wealth is important because of the fact that the government, with which the Left completely identifies, prints money.  It doesn’t create the wealth underlying that money, but it prints the paper representative of that wealth.  Because the government with which the Left identifies prints money, and because the Left views money and wealth as the same thing, the Left therefore views your money in precisely the way a toddler views anything it wants: Both Leftists and toddlers are unreasonably and unfairly territorial, laying claim to property if they can prove any relationship whatsoever to that property.  The toddler’s creed needs only the slightest editing to apply:

I’ve even got quotations to prove that the Leftist creed tracks perfectly with the toddler creed:

There are a lot of wealthy, successful Americans who agree with me—because they want to give something back. They know they didn’t—look, if you’ve been successful, you didn’t get there on your own… If you were successful, somebody along the line gave you some help. There was a great teacher somewhere in your life. Somebody helped to create this unbelievable American system that we have that allowed you to thrive. Somebody invested in roads and bridges. If you’ve got a business—you didn’t build that. Somebody else made that happen. (Elizabeth Warren.)

Don’t let anybody tell you that raising the minimum wage will kill jobs — they always say that. (Hillary Clinton.)

In their own minds, just like toddlers, Leftists own everything they’ve ever touched, or could ever touch or desire. They’ve never progressed beyond the deadly sin of greed.

The Leftists’ extended toddler-hood also reveals itself in the temper tantrums they throw. The Ferguson riots, which have been propped up by every hardcore Left organization in the U.S., perfectly exemplifies this. When adults are disappointed in an outcome, they first try to reason and, when that fails, they work without violence to change the outcome or prevent future, similar outcomes.

Leftists have temper tantrums. Major, major temper tantrums. Unlike your standard toddler temper tantrum, though, Leftist tantrums are terribly destructive.  The City of Berkeley, Missouri, next to Ferguson, is already telling people to prepare as if they’re in facing a major natural disaster.  There’s nothing  natural about this, though.  It’s entirely a product of the Leftist temper tantrum culture:

I’m betting all of you can think of other toddler traits that characterize Leftists.  What we see in that group is all the worst aspect of toddlerhood minus any offsetting cuteness and, most importantly, minus any developing maturity.  Toddlers eventually grow out of that awful phase.  Leftists never do.

UPDATE:  Post updated to correct the fact that, in a celebratory frenzy, I neglected to check in which state that town of Berkeley was located.  It’s Berkeley, Missouri, abutting Ferguson, not Berkeley, California.  Damn!  It was so much better artistically when I’d read it wrong.