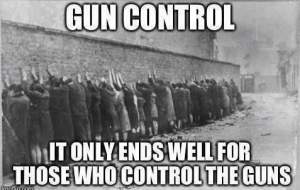 I’ve been reading on Facebook what my Leftist friends, and their Leftist friends, have to say about Obama’s imperial pronouncement on amnesty.  One comment struck me especially strongly, because I have no doubt that Obama already has something prepared on his desk.  I’ve changed the wording slightly to protect the Facebook author’s privacy, but the substance is unchanged:

President Obama should now prepare an executive order regarding gun control. On this type of issue, upon which the vast majority of Americans agree, it would be un-democratic for him not to act!

There are so many things wrong with this short statement that it’s hard to know where to begin. Reading it, I found myself sputtering “separation of powers,” “Second Amendment,” “oath to uphold Constitution,” and “a majority of Americans do not agree on gun control, they agree on opposing gun control.”

But really, none of this matters to Progressives. That last clause says it all: If it’s something on the Progressives’ “I want” list, it’s “un-democratic” for a president to abide by his constitutional limits, to honor the Bill of Rights, and to respect the will of the People.

UPDATE:  In his weekly “Goldberg File” email (which will become tomorrow’s anchor post at National Review), Jonah Goldberg explains the mindset governing both Obama and the Progressive who wrote the above demand for unilateral executive action to repeal the Second Amendment:

While I think partisan motivations are a powerful driver of what Obama is doing, he clearly has an ideological framework that helps him justify it. And that framework is not the Constitution. It is History.

Obama is starting from the proposition that immigration reform must happen. Not should, must. Water must seek its level. Objects must fall when dropped. The State must bring these people “out of the shadows.” Hence the GOP’s refusal to play along isn’t simply obstructionism or a disagreement about policy. (The House has in fact passed many immigration-related bills, just not the ones Obama wants.) The GOP is refusing to bend to Obama’s beloved moral arc of the universe. They are standing athwart History, yelling Stop. As a result, the president is merely hastening the inevitable, doing what History requires of him.

As I’ve written many times before, the story of the progressive movement can best be understood as activists going wherever the field is open. If the people are on your side, expand democracy. If the people are against you, use the courts. If the courts are against you, run down the field with the bureaucrats, or the Congress, or the presidency. Procedural niceties — the filibuster, precedent, the law, custom, the Constitution, truth — only matter if they can be enlisted to advance the cause. If they can’t, they suddenly become outdated, irrelevant, vestigial organs of racism, elitism, sexism, whatever. Obstruction, or even inconvenience in the path of progressive ends is prima facieproof of illegitimacy. The river of history must carry forward. If History hits a rock, the rock must be swept up with the current or be circumvented. Nothing can hold back the Hegelian tide, no one may Stand Athwart History. If you’re not part of the solution, you’re part of the problem. This is the liberal gleichschaltung; get with the program or be flattened by it.