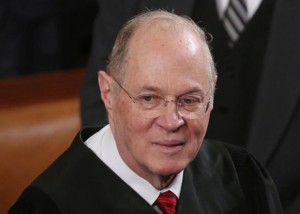 Sometimes the best romances come from unexpected sources.  There are frustrated souls, living desiccated, dull lives who, through their writing, can explore their deepest unrealized fantasies. Such is the case with Justice Kennedy’s decision in Obergefell v. Hodges.  It is littered with burning, passionate phrases that transform an ordinary Supreme Court opinion into an unexpected romance.

Of course, the confines of a Supreme Court decision mean that the true import of those burning phrases is hidden from most Americans.  I therefore have taken it upon myself to pen the actual romance Justice Kennedy so clearly wanted to write.

I have made some changes, of course.  First, I’m embarrassed to admit this, but I’ve been forced to write from a completely cisgendered heteronormative perspective, because that is all I know.  Second, not only am I not the best romance writer, I’m experiencing Justice Kennedy’s passions second hand, so this brief romantic vignette is slightly stilted and sterile, when it really should be something that could be recited to the throbbing, romantic music from that racist, Confederate flag-based movie, Gone With The Wind.

My apologies for my limitations. I invite other, better writers to try their hands at writing Justice Kennedy’s #LoveWins romance.

(All text in red comes directly from the Supreme Court’s decision.)

Corinna stood at the side of the crowded ballroom, watching longingly as dozens of other couples swirled about the room, keeping perfect time to the lilting rhythm of the latest waltz. She felt terribly alone, the only wallflower in the crowd.

Of course, she knew it wasn’t true that she was the only lonely one. Just a few paces away from the delicate gilt chair on which she sat, her voluminous lilac-colored skirts spilling gracefully over the side, stood a young man only a few years older than she was.

From his posture, Corinna could tell that the man was feeling as awkward as she was. Even though he affected a casual slouch, his posture was so rigid it was obvious that he was practically holding up the wall against which he leaned. His face was still, but his blue eyes blazed under straight black brows.

Looking at him, Corinna knew that this man felt as she did. Indeed, her soul understand that, though they’d never met, she knew this man with every fiber of her being.  She understand that, despite the cheerful, crowded room, both felt the universal fear that a lonely person might call out only to find no one there.

Corinna’s sense of fellowship with the young man was so strong she couldn’t stop herself, and giving into a most basic human need, she disregarded the precepts bred into her that a young lady never approached a strange gentleman. Standing up resolutely, Corinna turned his way.

For a moment, Corinna paused, afraid. Like all other young ladies, she had those yearnings for security, safe haven, and connection that express[] our common humanity. If she got a reputation for being “fast,” would she suddenly find herself socially isolated, an outcast, unmarriageable, never able to be one who learned experienced first-hand the transcendent importance of marriage?

No. Something drew her to that lonely stranger, with a force stronger than her fear. Gathering her courage, Corinne patted the exquisite flowers bedecking her golden curls, and went up to the young man, bit her already-rosy lips, and walked resolutely towards the stranger. Placing herself in front of him, Corinne’s courage failed and she was suddenly at a loss for words. She stared at him; he stared back at her.

“H-h-hello,” Corinna finally choked out. “I’m Corinna Merryweather. Have we met before?”

The man smiled at her, revealing even white teeth. Corinna blinked in surprise. He was more handsome than she had realized. She smiled back, her clear gray eyes twinkling.

“No, I don’t believe we have,” he replied in a deep, velvety voice. “I’m Sebastian, Lord Abermarle. Now that we’ve introduced ourselves, may I ask you to dance?”

“Oh, no!” Corinne exclaimed. “I mean, I would love to dance, but since we haven’t yet been formally introduced, I’m afraid we cannot. But perhaps we can sit together and . . . and speak.”

Lord Abermarle’s sable eyebrows rose, but he immediately led Corinne towards two empty chairs, seating her in one, and taking the other for himself. They were silent for a moment.

Corinne took a deep, gulping breath. “Forgive me, Lord Abermarle, for what I am about to say. My family and friends often tell me I am too forward and fanciful, but I could not help but believe that we may be sharing the same feelings, feelings that separate us from the others in the ballroom.”

“I do believe that those choices people make can shape an individual’s destiny. I believe too in soul mates. I believe that some of us are lucky enough to find the person for whom we were destined. “

Corinne stopped, panting slightly from the emotional stress of speaking to a stranger about matters that went far beyond the polite banalities of the ballroom.

Lord Abermarle remained silent, his gaze moving between her sparkling eyes and her heaving, white bosom. Corinne wasn’t sure what she saw in his eyes, but as it was neither anger nor disdain, she plowed onwards.

“When we are among the lucky ones to find our soulmates,” she said, “two people become something greater than they once were. Even people lacking in spiritually, who shy away from the concept of a soul, know that this coming together is still a unique fulfillment to those who find meaning in the secular realm.”

“Why are you telling me, a stranger, all this, Miss Merryweather?” asked Lord Abermarle, his deep voice suddenly husky.

“I know not,” Corinne replied. “No, that’s a lie. Years ago, I went to a gypsy who told me that, when I saw the face of my future husband, I would recognize him immediately. I laughed at her. I was a giddy fifteen and never wanted marriage for I feared I would be tied-down, like my mother, trapped in a loveless union that, every year, drained away her warmth and joy.”

“You speak truly,” said Lord Abermarle. “We in the ton have less freedom than the simplest country couple. We marry for property and title. We most certainly to not marry for love, and no dynamic allows two people to find a life that could not be found alone, for a marriage becomes greater than just the two persons. That bliss is the commoners’ lot, not ours.”

Corinne nodded gravely, speaking to this man as if she had known him years, not mere minutes. “Yes, that’s what I thought too. But the gypsy promised me that there are some lucky ones who find the person who is essential to our most profound hopes and aspirations. When I saw you, I knew that I was one of those lucky ones.”

Lord Abermarle looked down at her. “And you believe that I am your soul mate?”

“Yes,” said Corinne resolutely. “Yes, I do. I know this sounds as if I’m fairy-touched, but I do believe that, were we to marry, ours would be a marriage that embodies a love that may endure even past death.”

Corinne stopped speaking, horrified by her boldness, but feeling that magical pull that told her she had done the right thing.

“I would scoff,” said Abermarle, “but I cannot. The moment I walked into this ballroom and saw you, I knew that you were my destiny. I have spent the entire evening fighting the impulse to gather you into my arms, sweep you out of this room, and escape with you to Gretna Green so that we can be joined together swiftly and forever.”

He paused a moment, gently stroking her soft, white cheek with his strong, lean hand.

“I should have known Fate wouldn’t allow me to turn away from this gift. Even as I resisted, you came to me. I thank God for your forwardness. Were it not for that, my failure to accept my destiny would have condemned [me] to live in loneliness, excluded from one of civilization’s oldest institutions — forever denied that enduring bond that ensures that two persons together can find other freedoms, such as expression, intimacy, and spirituality.”

Swift, happy tears rose to Corinne’s eyes. Lord Abermarle again lifted his hand to Corinne’s cheek, this time gently wiping away the traces of those tears.

“Come, my love,” he said. “Let us go find your parents so that I may ask for your hand. This is the moment of transformation — strangers into relatives, binding families and societies together.”

Lord Abermarle stood, extending his hand to the now-radiant Corinne.  The two of them, still holding hands, plunged resolutely into the crowd, searching for her family, secure in their loving, transcendent future together, one that would be celebrated by all regardless of the fact that none could understand the strange dynamics that brought these two loving people together.