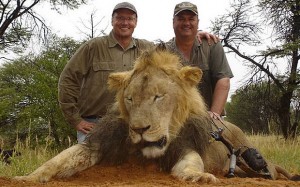 You all have probably heard that an American dentist paid around $50,000 for the opportunity to kill Cecil, a well-recognized lion in a Zimbabwe nature preserve, with a bow and arrow. Legally, the problem seems to be that the people who dealt with the dentist forgot to tell him that he was killing a protected animal, something he was able to do because his contacts lured the animal out of the preserve. Worse, the animal was initially wounded and may have suffered greatly until the hunters found him the next day and finally slaughtered him.

It is not immediately apparent that the dentist committed an illegal act. Certainly, many people consider big game hunting an immoral act. Unlike ordinary hunting, one can’t justify it by saying “I always eat what I cook” or “This is necessary to cull a population that will otherwise starve to death.” Instead, the killing is done for the sheer love of killing — and perhaps to decorate a den at home.

While I’ve long ago left behind my knee-jerk opposition to all hunting, especially since I recognize that hunters do a great deal to preserve natural habitats in America, I don’t think I’d like to hunt, and I most certainly cannot come up with a rationale to justify big game hunting. Put another way, I’m not a fan of what the dentist did, even assuming it’s true he didn’t intend to contravene game preserve protections.

Not being a big fan, though, is not the same as being a crazed, hysterical murderer — and that’s precisely what Cecil’s fans are looking for. Thanks to the miracle of Facebook, I stumbled across a post from a guy named Ron Pringle (rocker/surfer) who is calling for the dentist to be murdered (emphasis added):

We need to handle this dentist from Minnesota who KILLED a beloved lion named Cecil… A majestic creature and king of the jungle who was lured out of the National Park after this dentist who is named in this article paid 50 thousand to kill him with a bow and arrow… A similar fate perhaps for Mr Dentist murderer ? … you can look him up on the web . Read this article and see what Mr dentist murder has been up to in terms of all the other species he has been working to eradicate single-handedly. Maybe we should all look up his information on the World Wide Web and tell him how we feel maybe a few hundred thousand of us should visit his city his in Minnesota. ROAD TRIP

None of Mr. Pringle’s 5,000 “friends” questioned murdering a man for killing an animal. Instead, they enthusiastically endorsed the idea.

There was the irony deficient Maria: “I’m not one to advocate violence, but it would be just if somebody took that guy out… It would be a nice warning to all the other a**holes who want to murder wild animals.”  Irony-deficient Maria supports the Southern Poverty Law Center and is all about holistic healing. (Apparently she thinks that dentist is beyond her holistic help.)

Norman, who lacked empathy for a man he terms (I think) a “loser”: “kill that looser [sic]!”

Two gals named Jan Murray and Leah Mae Miller-salmon, and a business named Dans Quality Fences (and what is it with Leftists and grammar fails?) who did everything they could to make sure the dentist could be easily located by a convenient hit man or maddened mob. I think we call that aiding and abetting. Jan, the aider and abettor, supports PETA (“Holocaust on a plate”) and (surprise!) Bernie Sanders. You won’t be surprised to learn that fellow aider and abettor Leah Mae Miller-salmon also supports PETA.

Jackie, who stereotypes dentists (shame on her): “What a disgusting piece of shit he is. Figures a sadistic dentist.” Dentist-hating Jackie has a thing for sharks — the water’s fiercest predators. Apparently she only likes her killers cartilaginous.

Hung, who stopped short of murder but clearly believes in karma: “Hope he dies of a agonizing heart attack or gets mauled by a lion!” Karma worshipping Hung is a “mercenary terrorartist revolutionary.” I don’t know what that is, but it sounds like someone who thinks if he’s sufficiently emo-hip, he’s made some sort of political statement.

Kymberly, who went all ISIS: “He should be beheaded and mounted!!”

Teddy, a law-and-order type who called for a capital trial: “Death penalty.” Teddy is actually rather conservative, which may explain why he demanded a legal process (death penalty) rather than vigilante action. It turns out that even when conservatives go crazy, they do so in a law and order way.

Melinda, who envisioned a little Hunger Games fun: ” He needs to be hunted with a bow and arrow. Bastard!!!!” “Hunger Games” Melinda supports veganism. Apparently she won’t eat animals but will hunt people. Go figure.

Toby, who seconded Melinda’s vision: “What a piece of shit. I say we hunt him!!!!”

I should add that the original Ron Pringle was excited by what he and others had started: “He is being hunted worldwide right now”

Ron Pringle, incidentally, is just one little man, with a few dozen blood-thirsty friends. The demand for the dentist’s death is bigger than Ron and his posse. Indeed, just a little while ago, Ron shared on his Facebook page the fact that some enterprising person has placed a bounty on the dentist’s head:

Am I the only one who finds it deeply disturbing that ordinary American are demanding a man’s murder for his hunting an animal? As I hope I’ve made plain, I do not support what the dentist did. If he committed a criminal act, he should most certainly pay a fine, which is the traditional common law compensation for wrongfully causing an animal’s death. But to equate killing an animal with a capital crime — to me, that’s a profound moral failing.

Dennis Prager frequently tells of his despair at learning that, given the choice between saving a pet in the path of a train and saving a person, many Americans will save the animal. They no longer see their own species as being of value.

Perhaps I’m a bit sensitive to this subject tonight because I had over for dinner one of my children’s friends, a 17-year-old manic feminist member of ANSWER, who thinks that the world population needs to be greatly diminished. Having been irritated enough by her paeans to Angela Davis and her moronic statement that the US has two rich people who control America’s wealth (I assumed she meant Charles and David Koch, and not billionaires John Kerry or George Soros, along with his millionaire pals Harry Reid, Nancy Pelosi, Barbara Boxer, Dianne Feinstein, etc), I lost control of my tongue told her that I would be interested in this “culling” idea only when those who bemoan the world population offer themselves up as the first human sacrifices — and then go through with the offer.

I value animals and do not believe that they should ever be the subjects of gratuitous torture or killing.  Nevertheless, I recognize that there is a profound existential difference between an animal and a human.  We have become a very sick culture, one that has lost all perspective about the value of human life. The same people who seem to be shamefully silent about ISIS’s depredations in the Middle East — slaughtering gays, Christians, women, and children with sadistic abandon — are crying out for human blood in exchange for a lion’s death.  It is a reminder that we could very easily slip into our own ISIS cult here, with eating a steak soon to become a capital crime.