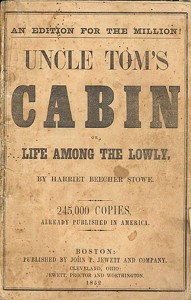 Ken Burns’ epic Civil War documentary came out in 1990. That was during my years as a lawyer in a very big firm and as a single gal enjoying life. My lifestyle then matters because it explains why, back in 1990, I managed to watch only the first episode of the 9-part series.

Now that we’ve been to some of the Civil War’s most famous battlefields — Gettysburg, Antietam, Fredericksburg, and Bull Run — my husband and I are taking the time, finally, to watch the Civil War series in full. There’s something about having seen the battlefields, even though they are now green and peaceful places, that makes the series reach me at a visceral level in a way that could never have happened when I was a flighty young thing. The series moves me deeply.

Harriet Beecher Stowe’s Uncle Tom’s Cabin appears in the very first episode, of course. As Lincoln allegedly said to the author of this phenomenal bestseller, “So you’re little woman who wrote the book that made this great war.”

If he did indeed say it, it was not an exaggeration. While the abolitionist movement had been agitating for around one hundred years by the time the war started, it was Stowe’s book that took the abolitionists from being a fringe religious movement to one that galvanized the general public. In the North, slavery was suddenly no longer just a peripheral issue that troubled people’s consciences; instead, it was a central issue that drove the South out of the union (“How dare those arrogant Yankees tell us what to do?”), triggering the biggest conflagration in American history.

I don’t know how many of you have read Uncle Tom’s Cabin, but I have. It is not a literary masterpiece. Stowe’s prose is the modern equivalent of a dime store novel — but that’s completely irrelevant. What matters is that she is a writer of marvelous narrative power. The characters may be hackneyed, but they are vivid and the slaves’ travails reach out and grab you by the throat. This is especially true for an audience that wasn’t made callous by Jerry Springer and Oprah, and that wasn’t exposed to every image known to man thanks to television and the internet. Mid-19th century Americans carried their true emotions quite close to the surface.

Ironically enough, just as Stowe’s book initiated the fervor that led to a war that left more than 600,000 American dead in its wake, I think it was another woman’s book that helped keep Jim Crow alive by creating across America a passion for the romance and gallantry of the old South. I speak, of course, of Margaret Mitchell’s Gone With The Wind, which was published in 1936, and then kept alive for generations of Americans thanks to one of the best movies ever made in Hollywood.

I first read GWTW when I was 12, and probably read it annually for the next six or seven years. I read so often because, at least to my adolescent self, it was one of the greatest, and most tragic. romances ever written.

Scarlett O’Hara is a deeply flawed character who ought to be despicable because of her grasping, greedy, self-centered ways. That she is not — that she is peculiarly compelling and that her valiant spirit causes us to feel for her even at her worst — makes her something of a metaphor for the pre-war South itself, at least as Mitchell wrote both the character and the culture. While Southern culture may have been wedded, selfishly, to an utterly evil institution, Mitchell brought to that society the same fire, charm, courage that Scarlett had herself.  Her characterization of a lost time touched many people who still had enough moral center to condemn slavery.

Scarlett’s travails — which are also the travails of a war-torn South (and it’s worth remembering that, barring the foray into Gettysburg and some skirmishes out West, Union soil and towns saw no battles) and a Reconstruction South — inevitably elicit sympathy. How can they not? Even though Scarlett and the South were in the wrong, their sufferings were very real and their attempts to cope with that suffering had a peculiar courage.

Moreover, Margaret Mitchell, unlike Harriet Beecher Stowe, was a good writer. GWTW may not be great literature, but it’s damn good writing, so the reader inevitably begins to empathize with the lead characters — and the South itself is the true lead in this grand tragedy.

GWTW taught a generation of Americans who had no memory of the actual war that the South was gracious, genteel, mannered, gallant, valiant, brave and, when defeated, as heroic in defeat as it was during the War. (Ken Burns’ Civil War makes it very clear that the South had a much better military than did the North. A few brilliant generals with a fairly small cadre of committed troops saw victories far in excess of what their materiels and numbers should have allowed.)

GWTW also taught a generation of Americans who had little contact with black people that blacks were a fundamentally childish race and therefore were always at their best when they had good whites to look up to and take care of them. Certainly, when I was a child, the romanticized world of GWTW’s beloved house slaves (especially Mammy) seemed infinitely preferable to the realities of South Central LA, Watts, or other major American slums. My immature mind concluded that anyone with half a brain could see that it was nicer to wear clean, bright clothes, and scold spoiled Southern heiresses while lacing them tightly than it was to live in a modern American housing development.

It was actually quite a while before I was able to understand that slavery is so intrinsically evil, and so at odds with core concepts of human individualism and liberty, that it can never be accounted a good thing, no matter how superficially pleasant it may appear. I think it was this eventual understanding — when I cast off the last shackles of “Gone-With-The-Wind-ness” — that also enabled me to understand that a welfare state is just another form of slavery.

And when I say “welfare state,” please understand that I am not referring to a moral country that cares for its old and weak, its helpless and frail. Instead, I am referring to a country that systematically tells vast swaths of its citizens that they are better off living the most marginal existence possible at the government’s expense, than they would be were they to strike out on their own. The only difference in modern slavery is that the slaves are instructed not to work (“white privilege owes you”), than being instructed to work (“you owe white privilege”). Either way, the new slaves have been deprived of the ability to learn the skills and make the decisions that are the hallmarks of a free people.

I’m a more bookish person than most, but I am quite convinced that Margaret Mitchell’s powerful, romantic, tragic, gilded view of the South before, during, and after the Civil War allowed Jim Crow and other depredations against blacks to continue long after they should have died a natural death. Just as Stowe brought a generation of Americans to realize the horrors of slavery, Mitchell made a whole new generation see the beauty of a society built upon slaves’ backs and to believe that this society was as good for the slaves as it was for their masters.

UPDATE:  Patrick O’Hannigan offers a typically insightful and thoughtful challenge to my post, arguing that a much more powerful book, by a much greater American writer, helped offset any message she created.