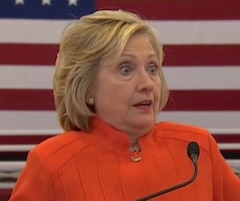 My friend Scott continues to be fascinated by the slow-mo train wreck that is Hillary’s political career (not to mention her careening into criminal territory).  He sent me the following thoughts:

Hillary’s defenders are claiming that our national secrets are over classified and thus, irrespective of any finding that she handled and retained classified information, it is unimportant. It is all a tempest in a teapot according to David Brock of Media Matters and Matthew Miller at Politico. Ed Morrissey deals with this new spin at Hot Air:

This glosses over a couple of very important points. First, the proper way to reclassify material is to have the issuing authority review it. That duty does not fall to the Secretary of State or her aides, but to the agencies that produced the data, and their direct chain of command, all the way to the President. Not even Congress can declassify material, at least not directly. Users of this material have a positive responsibility to protect it, are briefed constantly on how to handle it while it remains classified, and face severe consequences for violating those protocols and laws, most definitely including prosecution when it involves willful violations or gross negligence (18 USC 793, especially in (f)(1), the application of which is not limited to classified material).

Second, while much of the e-mails flagged (so far) are classified at Confidential and Secret levels — where overclassification is a chronic issue — two e-mails contained information that the issuing agencies considered Top Secret and compartmented. That data came from the NSA and other signals intelligence operations, including satellite-gathered data. Those kinds of information carry high classifications for very substantial reasons, including the protection of our methods of collecting it.

Finally, all of this starts and ends with the exclusive use of an unsecured and unauthorized communications system located in Hillary Clinton’s house, effectively an unauthorized retention of classified material (a crime under 18 USC 1924). There is no valid reason for a federal official with compliance requirements not just for secure transmission of sensitive materials but also with the Federal Records Act to conduct official business through a home-brew server. It was a deliberate attempt to circumvent both responsibilities, and largely succeeded at the latter until the existence of the server became public. As a result, the State Department made numerous misrepresentations in courts in response to FOIA demands that involved communications from Hillary and her team that were required to be part of the public record.

Classifications are not “elastic” either, not to those who handle the material, and especially not when it comes to signals intelligence. They are required to handle it according to the markings no matter what they personally think of its necessity. If Hillary and her staff had a problem with the classification levels cited, then they should have requested a review of the material — and there is no indication that anyone ever did. Even if they had, Hillary and her team were still were required to comply with the laws and protocols while the material was still classified.

Overclassification may be a problem, but it’s not this problem. This problem is that a high-ranking public official secretly evaded legitimate constitutional oversight from Congress and the courts with this e-mail system, which recklessly endangered US national security for four years to service her own personal motives.

Jefferey Toobin raises a very closely related defense at The New Yorker that is deserving of its own fisk. Toobin is supposedly a legal analyst and a lawyer. One could not tell from his recitation of the facts and the law. If he were to make this argument in Court on Hillary’s behalf, he would be eaten alive for misstating the facts and the law.

Toobin says of Media Matters “They argue that she is in the clear because she never disclosed information that was designated as classified. But information can be classified whether it is marked that way or not” He then goes on from there to discuss classification. This is a replay of what the left did claiming “torture” over enhanced interrogation. They ignore the law and any inconvenient facts. One, Hillary received and retained classified information. That is a misdemeanor. Two, she was grossly negligent in allowing access to that information to people without an appropriate level of security clearance. That is a felony. Three, if in fact she wiped her server, she also destroyed documents subject to a subpoena, at least as regards the fifteen e-mails from Blumenthal that she never produced. That is a felony.

Toobin makes the overclassification argument, but then comes up with this gem to make it seem as if Hillary can be falsely accused and never defend herself.:

It’s not only the public who cannot know the extent or content of government secrecy. Realistically, government officials can’t know either—and this is Hillary Clinton’s problem. In investigating only a small portion of her e-mails, government investigators have already flagged more than 300 that are potentially classified. They will surely find more. As Moynihan noted, government bureaucracies have every incentive to over-classify. It’s the risk-averse approach, and there’s no penalty for erring on the side of caution. Besides, over-classification makes their work seem more important.

In one case, according to media reports, one of Clinton’s potentially classified e-mail exchanges is nothing more than a discussion of a newspaper story about drones. That such a discussion could be classified underlines the absurdity of the current system. . . . .

The consequences for Clinton, in the midst of a Presidential run, are far more likely to be political than legal. Criminal violations for mishandling classified information all have intent requirements; in other words, in order to be guilty of a crime, there must be evidence that Clinton knew that the information was classified and intentionally disclosed it to an unauthorized person. There is no evidence she did anything like that. This is not now a criminal matter, and there is no realistic possibility it will turn into one. . . . .

Still, the investigative wheels are now turning, and the process is out of Clinton’s control. In most political controversies about documents, the best response for a politician is simply to disclose them in order to diffuse the issue. But that option is not available to Clinton. The relevant agencies are now reviewing the documents in order to determine whether they contain classified information; if they find that to be the case (and they will), Clinton will not have the right to make those documents public; the public will never know whether she was discussing newspaper stories or the identity of covert assets. . . . .

Okay, so let’s go over all the prevarication and spin in these few paragraphs. One, to claim that Hillary would not have known that anything from the NSA or satellite data was not Top Secret is ludicrous on its face. Two, the claim that the public will never know – nor can Hillary make public in her defense – the nature of the classified information at issue, is asserted in the same sentence that Toobin notes that one of the Top Secret e-mails at issue concerned discussion of a newspaper article. One wonders if Toobin reads what he writes, or if any editor bothers. Three, to claim that Clinton, as Sec. of State, would not realize that the things she was discussing privately in e-mail about our foreign relations was not classified . . . good luck making that argument in Court. Four, Toobin misstates the applicable law. The intent requirement does not apply to 18 USC 793, a felony that requires only gross negligence. As to that “mere discussion” of a newspaper article:

A separate conversation also took place that could point back to highly classified material in an improper manner, though it could also reflect information collected independently, U.S. officials told the Associated Press.

And this continuing meme that this is not a criminal investigation is equally ludicrous. The FBI is looking into whether classified materials were mishandled. Who the hell does the left want us to think did the mishandling? 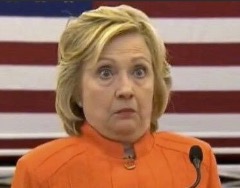 Lastly, why doesn’t Toobin or anyone on the left address the obstruction of justice concerns raised by Hillary operating completely in private to skirt oversight and FOIA, and in addition to, since 2013, unlawfully skirting subpoenas? Why don’t they at least address the issue of her wiping the server clean knowing that subpoenas were out there? Why doesn’t a single one of them question her contention, false on its face, that she had the right to unilaterally determine which e-mails in her government unapproved email did or did not constitute government records? Why do they give her a pass on retaining government records for three years, all of which should have been turned over in 2012 after review and approval by the State Dept.? How can they give her a pass for e-mail without security markings when it was she who never submitted them for review and classification?

One wonders. But those questions are clearly not to be found among Clinton loyalists, for whom electing Clinton trumps all questions of law, equity and national security.