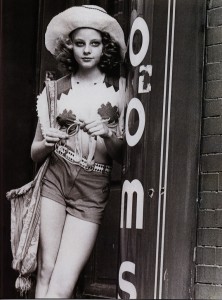 I castigated the Left for racism based upon reports that Obama & Co. have told American troops to stand down when confronted with Afghan pederasty. Racism is not the only motivating factor.  At a fundamental level, the Left encourages child sexuality because it decouples children from their sense of themselves individuals, making them more malleable for the state.  After having been underground for decades, pedophilia is coming to the fore as the new frontier for increased state control over individuals.

I developed the idea about a totalitarian state’s vested interested in child sexuality in a 2010 American Thinker article I wrote, entitled “Sex and State Power.” The article examined Islam’s tight control over women’s sexuality, which allows it tight control over women in general, as well as the decades’ long hard-Left push, both in America and abroad, to sexualize very young children. My focus in 2010 was the Left’s press to educate children as young as 5 about sexual preferences and practices outside of the old-fashioned norm of heterosexual sexuality within the context of marriage. Skipping over the Islamic issue and going straight to the pedophilia issue, I’d like to quote from that article:

The practical problem for the Left when it tries to attack individuality as expressed through sexuality is the fact that a person’s sense of an inviolate physical self develops quite early, during childhood. As one of my blog readers said, “Once a child individuates, he becomes aware of being his own self. … The most basic thing one can own is one’s own self, and not letting others touch that self in ways you don’t like is an exercise in self-ownership.” (Emphasis mine.)

The Left, therefore, needs to decouple self and body as early as possible in a person’s development — and it does this by bringing its own peculiar notions of sexuality into the realms of child-rearing and education.

Once upon a time, the radical Leftists were quite open about their agenda. In the late 1960s and early 1970s, German Leftists explicitly sought childhood “sexual liberation” as a political goal. In practice, this meant exposing children to adult sexual practices, focusing obsessively on the children’s external sexual organs, speaking about sexual matters in the crudest terms, and, unsurprisingly, engaging in actual sexual molestation. The Leftists advocating this liberation framed it as a way to break free of stifling bourgeois notions of morality that enslaved people and prevented them from realizing full sexual pleasure.

Reading the Leftists’ contemporaneous literature, however, reveals a more comprehensive aim than merely breaking those much-derided bourgeois sexual chains. The Leftists also intended to destroy the traditional nuclear family, with its bright lines between parent and child, and to bring down the capitalist system, which is dependent on a competitive, and therefore individualized, workforce:

Nor can the above ranting be excused as the thoughts of a radical fringe. For example, these same European Leftists infiltrated the Catholic Diocese in Mechelen-Brussels, in Belgium, creating a sickening environment that actively promoted pedophilia. In other words, this particular church’s forays into perversion were not the secretive gropings of individual priests. Instead, there was a concerted effort, led by a liberal Belgian church hierarchy, to make pedophilia a routine practice within the Church.

While the overheated Marxist rhetoric of the 1960s has died away, the Leftist preoccupation with childhood sexuality, and its relentless desire to have the state control a child’s sexual development — and, by extension, to deny the child self-ownership — is still alive and well. The primary pathway the Left currently uses to decouple childhood sexual development from self-individuation is the gay rights agenda.

What wasn’t on my radar in 2010, when I was focused on the Left’s push to make children sexually aware of and supportive for the LGBTQ spectrum of sexuality, was pedophilia.  In fact, I’d long been aware of the North American Man/Boy Love Association (“NAMBLA”), which left flyers all over Berkeley when I was a student there in the very early 1980s.

To give you a sense of how swiftly our culture has moved, UC Berkeley in the early 1980s was one of the most radical Left campuses in America, but the students who picked up the flyers (which were literally strewn on the ground) were universally disgusted by the notion of pedophilia and understood absolutely that society should not condone sexual relationships between adults and prepubescent children or even teenagers.

Fast forward thirty-five years and you have one of America’s mainstream online publications, the Leftist Slate, running an article promoting sympathetic feelings for pedophiles. Milo Yiannopoulos uses that Slate piece as the springboard for a larger discussion about the push for government and social approval of pedophilia:

Today, Salon gave a platform to a self-confessed pedophile to explain his urges in sympathetic terms. “I’m a Pedophile, But Not A Monster” reads the headline. It’s a long, self-pitying screed that ends with a call to be “understanding and supportive” of adults who crave sexual intimacy with children.

Forgive me if I’m not first to start the standing ovation. In fact I’m pretty sure most people will find the existence on Salon’s website of this post both shocking and distasteful.

In other words, progressives who got fired up about whether green and purple was a “rapey” colour scheme were suddenly fine with discussion of incestuous pedophilia from a 22-year-old in a chat room full of teenagers. It has been a somewhat grotesque spectacle to watch.

But these two incidents are merely just the latest in a disturbing trend of pedophilia activism on the Left, which has gone out on a limb time and time again to normalise child abuse. From the 1970s to the present day, organised pedophilia has been a recurring problem for the supposedly progressive movement.

Yiannopoulos sees pedophiles as the new frontier in moral relativism and victim culture:

Anarcho-capitalists and libertarians may wish to dismantle many social and legal checks on personal behaviour, but they draw a hard line around behaviour that harms or violates the rights of others. Relativists have no such rules: by definition, they don’t believe in universal rules at all.

Horrifyingly, there are signs of a new pedophile acceptance movement forming on the Left. Just as Allen West warned, the gay rights movement is being used as a template. First comes the argument that pedophiles are just “born that way,” absolving them of any moral responsibility for their desires. Then comes the argument that pedophiles are just normal people, like the rest of us, but somehow impoverished or victimised by their own condition.

Inevitably, our society’s current ostracisation of pedophiles will be portrayed as an injustice: an oppression from which pedophiles must be liberated, or for which they deserve our sympathy. And woe to the oppressors! Quietly, in progressive columns and academies around the world, progressives are losing their footing and sliding down that slippery slope. Publications like Salon are abetting the turpitude.

I don’t disagree with Yiannopoulos’s conclusion.  Indeed, I think he’s correct.  I think, though, that the rot goes deeper than viewing pedophiles as just another group of victims suffering from the terrible discrimination inherent in Judeo-Christian Western morality (that’s the Leftist view, obviously, not mine).  As we struggle to protect those same Judeo-Christian values, it helps to keep our eyes on the larger issue:  Totalitarian doctrines have always been predicated upon controlling people by controlling their sexuality — and there is no better way to do that than to catch them when they’re young, very, very young.