Immediately after radical Islamists slaughtered at least 128 people in cold blood, and wounded more than double that number, my Facebook feed lit up with posts and posters expressing solidarity with the people of Paris.  I’m posting here a sampling of the images included in the posts.  As you scroll through them, think about what’s missing: 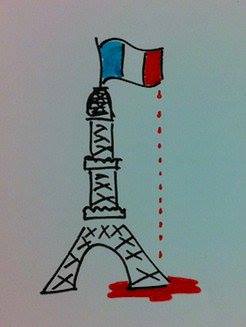 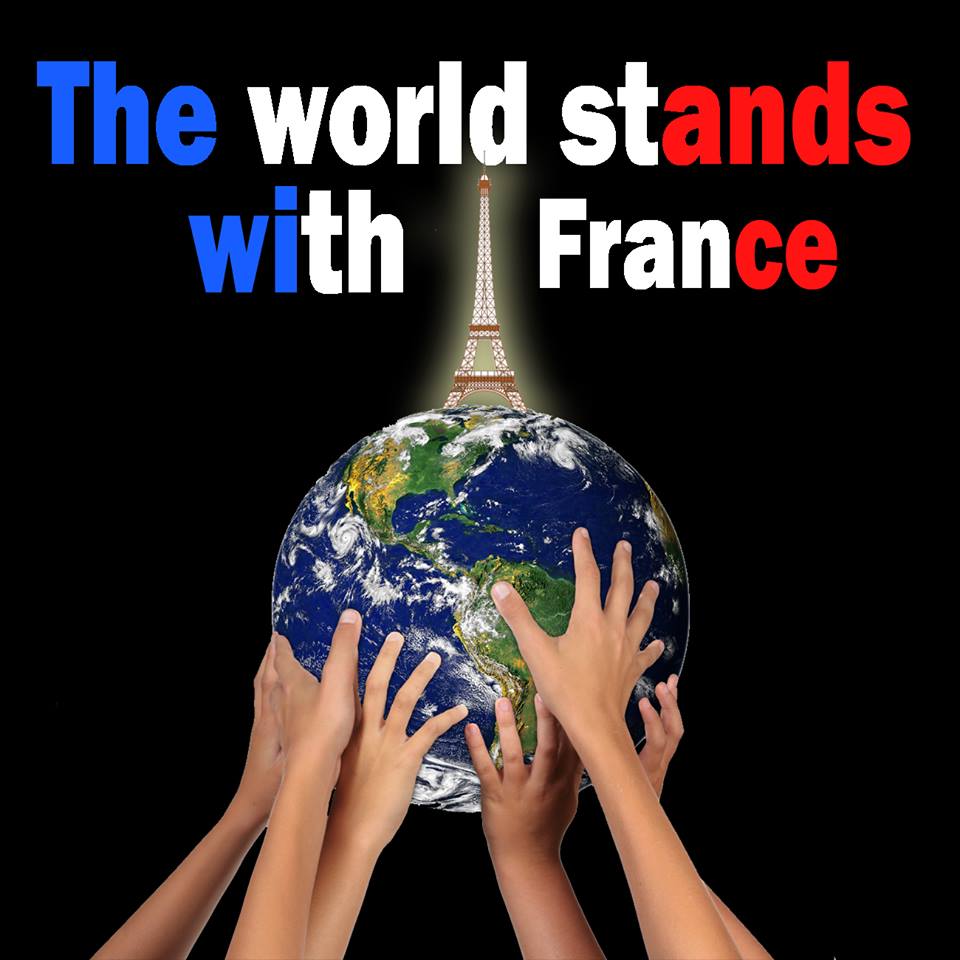 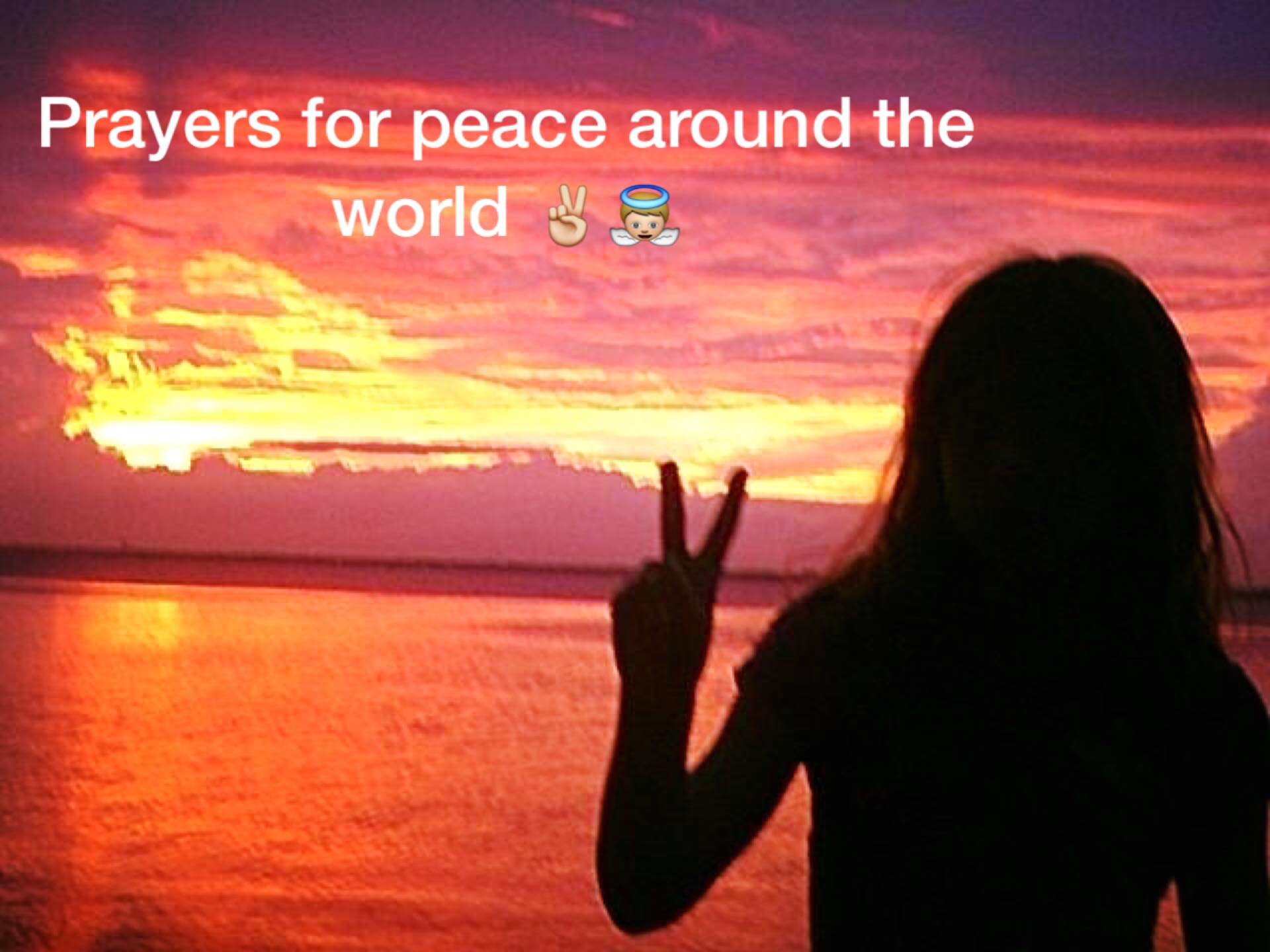 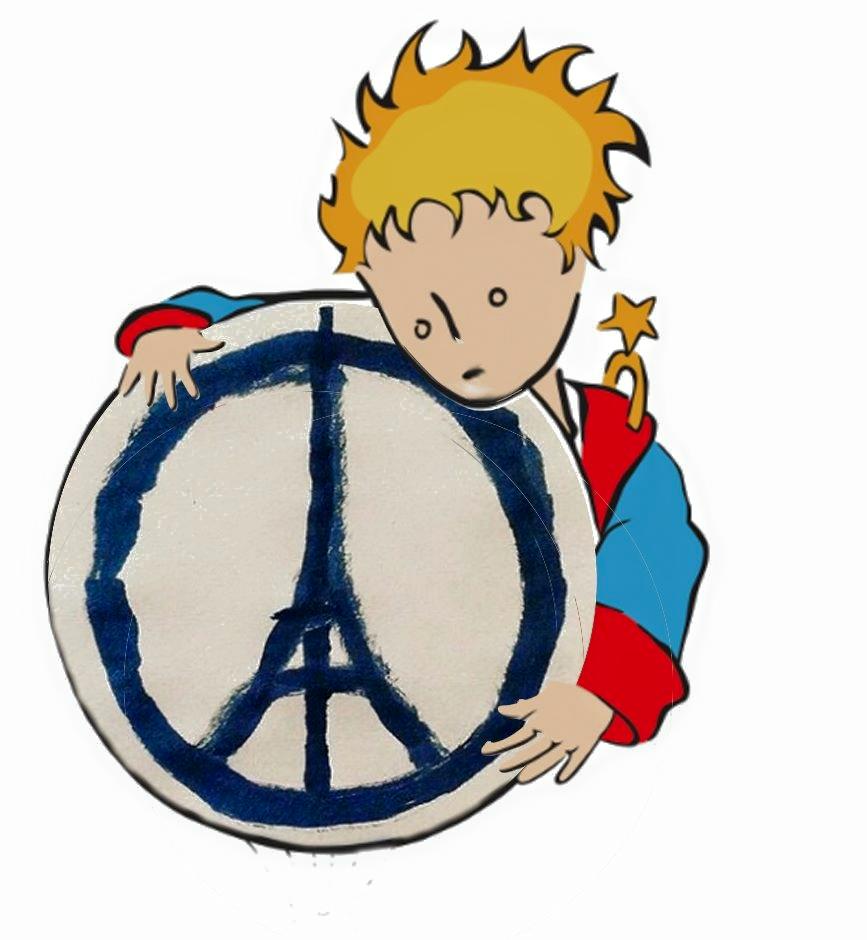 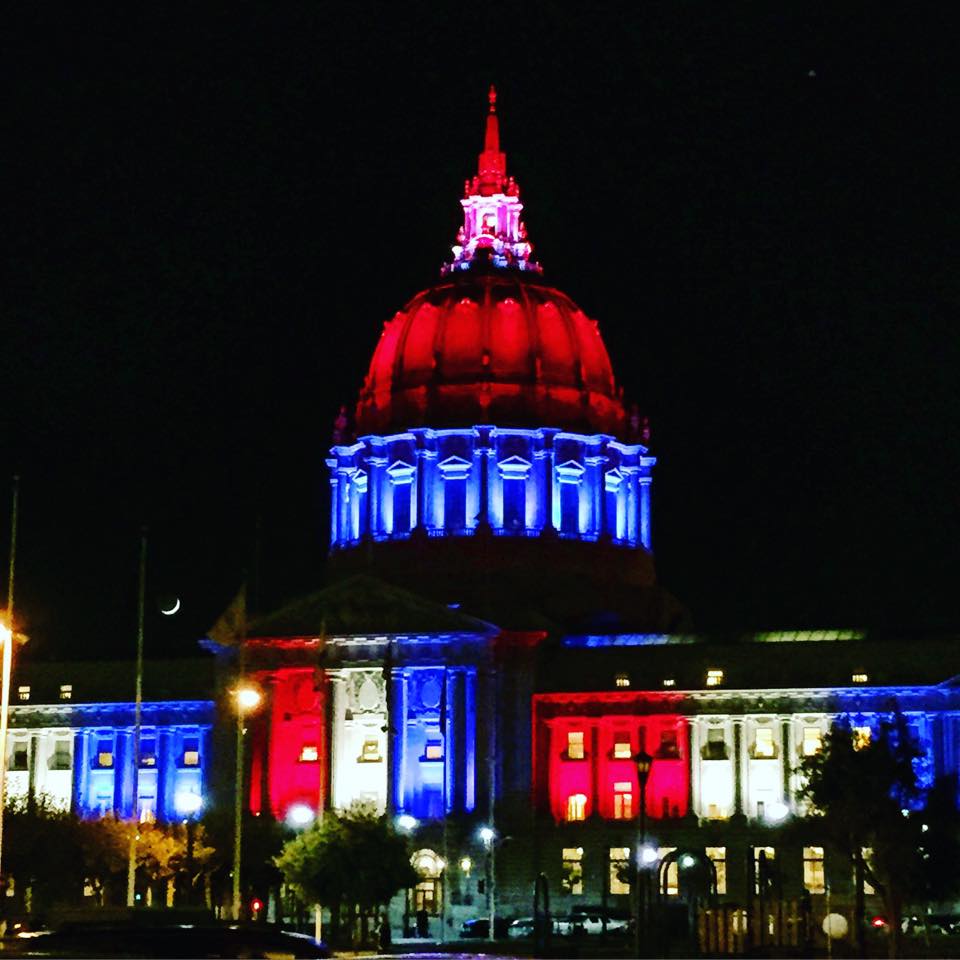 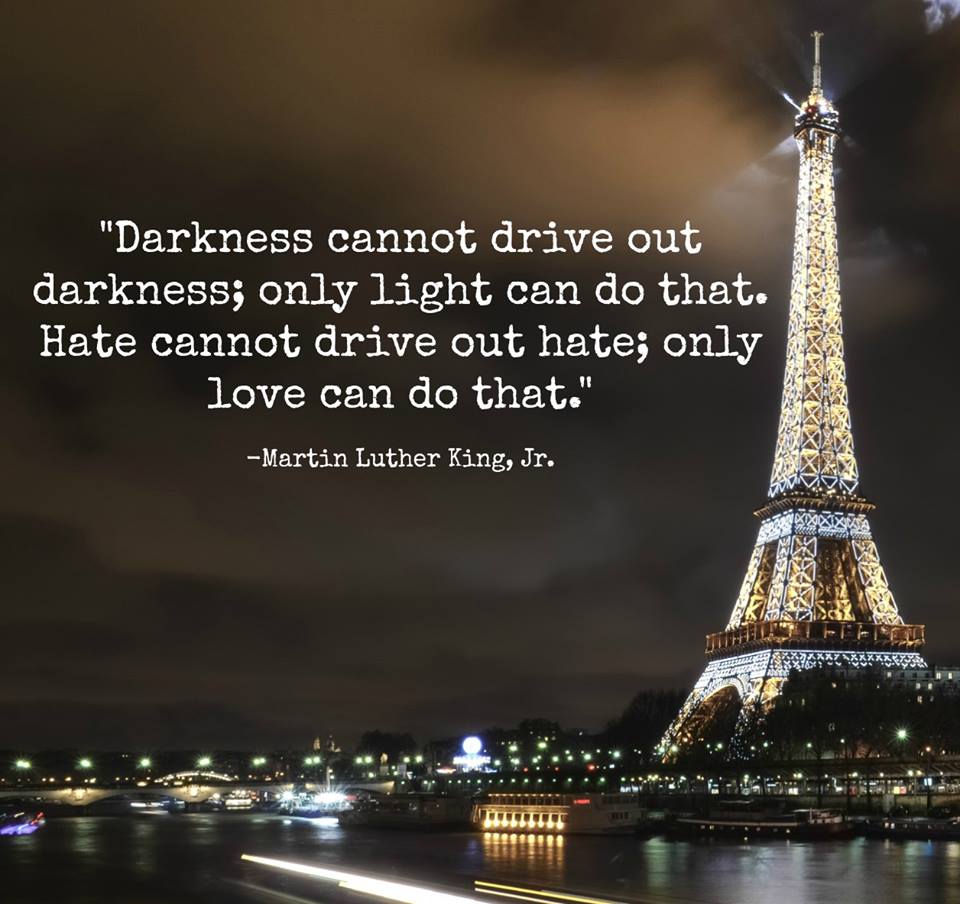 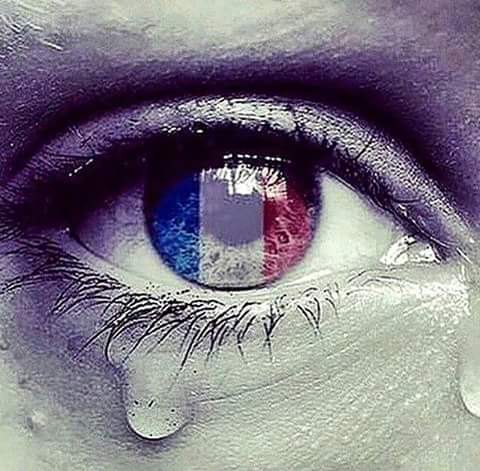 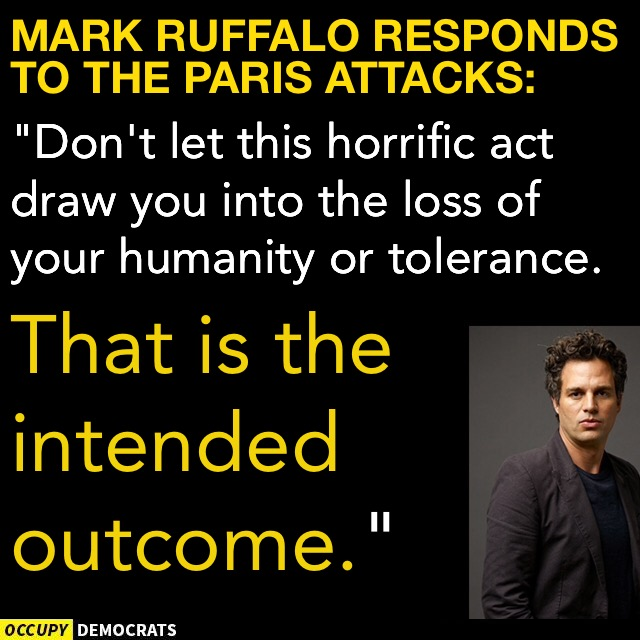 In addition, Facebook added a feature so that people can have a French flag layered over their profile picture.  Here’s an example of an overlay that several of my Facebook friends used: 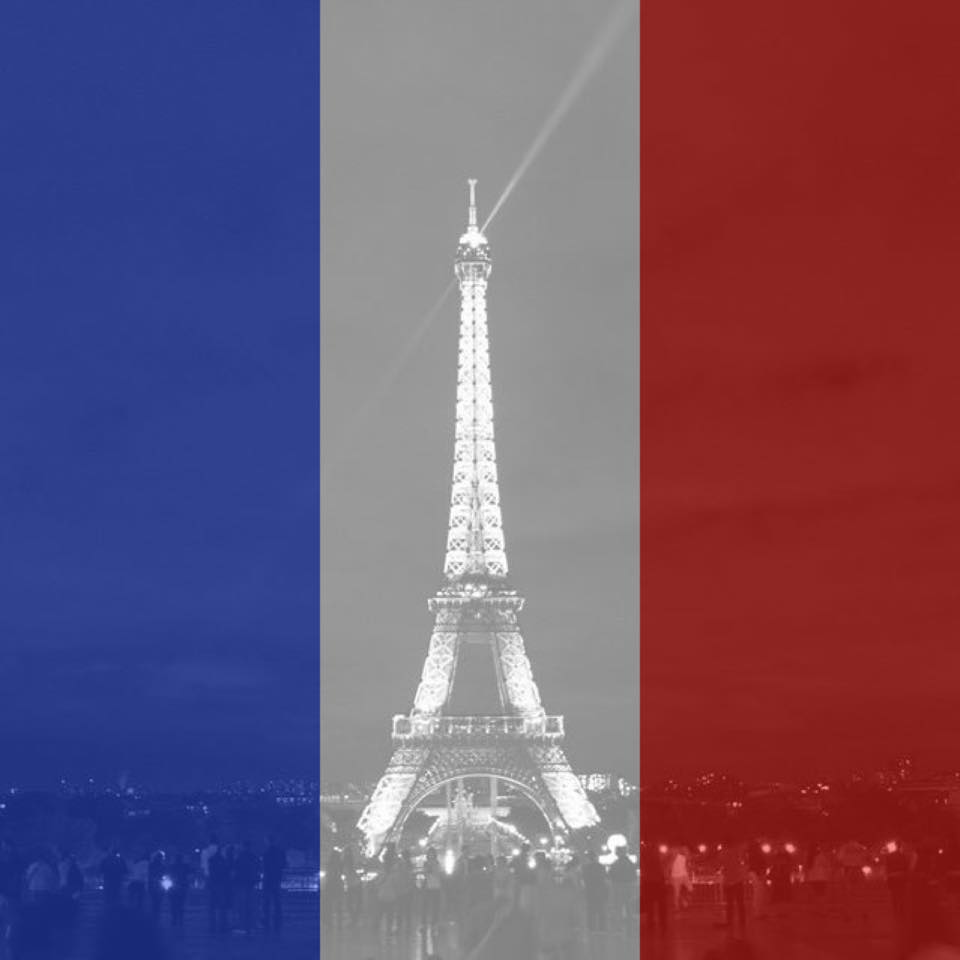 My friends — who are almost all Progressives since I’ve spent most of my life in hard Blue States — also added personal messages, almost all variations of “We stand with France” or “Our thoughts are with France” or “France suffered a terrible tragedy.”

What’s missing, of course, from everything that my friends posted or wrote is any mention of what precisely happened. Friday night’s events in France are obscured in a gauzy veil of passive voice and euphemism.

As a writer, I hate passive voice and I hate euphemisms. Any sentence that hides the actor either by removing him entirely from the sentence or by throwing him in at the end as an after thought, and that uses euphemism to turn a heinous act into an anodyne one is a cop-out and a white wash. Examples of these cop outs and white washes include variations of all of these statements:  “French people were killed” or “French people die in attack,”or “Paris hit by terrorist attack,” or simply “Poor France,” or “What a terrible tragedy,” or “Our thoughts are with France.”  Each is a cowardly effort to avoid saying that “Islamic jihadists slaughtered more than 129 people in cold blood and wounded more than double that number.”

This Leftist and Progressive refusal to name evil and its acts reached is apogee, of course, during the Democrat debate, when none of the candidates could bear to mention the word Islam in connection with what happened in Paris.  Indeed, Bernie Sanders went even further, absolving terrorists entirely, regardless of affiliation, and blaming climate change.

Given how radical Islamists have carried out major attacks on every continent except for the polar ones, I think it behooves us to be clear here: What happened in France is that several Muslim men and at least one woman, many of whom were in France thanks to the recent open borders policy in Europe, and all of whom were in thrall to a fundamentalist strand of Islam, used guns, bombs, and grenades for the brutal, cold-blooded slaughter of 129 people and the attempted slaughter of another 300 people. This was not a “tragedy,” it was a carefully focused and planned, and utterly evil massacre.

Here’s a question for you: When I wrote that radical Islamists carried out this attack, did I indict all Muslims? I hope not, because that was not my intention.

This Islamic doctrine hews to a Koranic interpretation mandating violent conquest to bring about a worldwide Muslim caliphate. Radical Islamists, or Islamic Jihadists, or Medieval Islamists, or whatever else you want to call them to distinguish them from their peaceful co-religionists, are people who enjoying killing because it brings them closer to their God.

As a quick aside, we can thank Saudi Arabia for exporting this extremely violent, imperialist doctrine all over the world. This would be the same Saudi Arabia to which Obama extended an economic life line when he put the kibosh on the Keystone pipeline, which would have gone a long way towards freeing North America from its reliance on Saudi oil.  Obama has now ensured a continued flow of money into Saudi Arabia, money that Saudi Arabia then ships to its Wahhabi madrassas. Thanks, B. Hussein Obama. 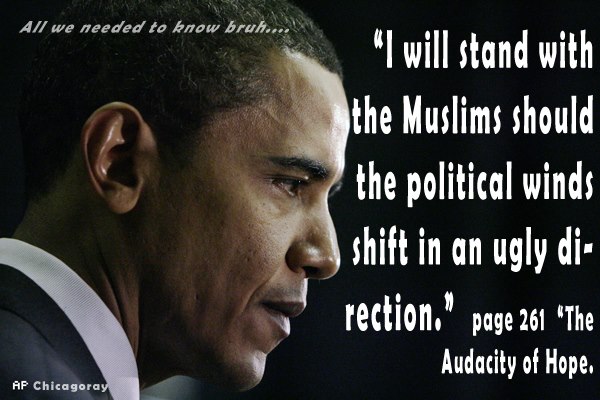 If Western culture is to survive the current Jihadist onslaught two things have to happen: (1) We have to fight back and (2) we have to be willing to identify clearly the enemy against whom we are fighting. We cannot hide behind passive voice and euphemisms. All people of good will need to be clear about what’s going on here, whether they are Christians, Jews, Hindus, atheists, or any other ideology group, Muslims included.

Lest anyone think I’m totally without compassion when I make this demand on people of good will, I fully understand that for those ordinary Muslims who live surrounded by radical Islamists, speaking out against jihadists can be a death sentence. I therefore cannot blame them if they choose to be silent. Indeed, events in the Middle East show that, other than Christians in the jihadists’ path, no one suffers more from this violent strain of Islam than other Muslims.  (Just check out what happened in Beirut the day before the Paris attack, or check out the news from Israel every day, to get a feel for Muslim violence against anyone within its sights.)

I can and do, however, strongly blame those Muslims and their Leftist fellow travelers in the West who shout “Islamophobia” every time someone accurately points to radical Islam’s role in all of the violent attacks around  the world for the past forty years.  Just a small sampling of these endless serious of Islamic attacks includes a “lone wolf” student at UC Irvine, two brothers in Boston, al Shabaab in Kenya, train bombers in Spain, Muslims in Mumbai, Saudis in hijacked American planes, knife-wielding Arabs in Israel, and ISIS acolytes in Paris. (Go here for the full count, which is closing in on 30,000 now.)  The common denominator in each case is the Islamic jihadist belief in conquest using the sword. It is therefore not Islamophobia to say that Islam has a violent sect that we need to identify and fight.

The accusation that we are being Islamophobic when we point to Islam’s role in these slaughters is a form of censorship intended to prevent Western societies from responding appropriately to acts of war waged against them. Imagine how differently America would have responded to Pearl Harbor if we were told in December 1942 that it was “Japanophobic” to say that the Japanese mounted an unprovoked attack against our military in Pearl Harbor, killing 2,403 Americans and wounding another 1,178. Indeed, if Pearl Harbor happened today, Facebook would be filled with meaningless posts and posters saying “Our hearts are with the troops,” or “We stand with Hawaii.” A Martian dropping in on Facebook would have no idea what had happened or who did it.

Or about another analogy: Imagine that we’re in the wizarding world of Harry Potter. As you may recall, Voldemort’s Death Eaters eventually started attacking and killing muggles.

If muggles had said, “It’s tragic that those poor people died” or “We stand with the dead,” doing so would have let the Death Eaters entirely off the hook.

Alternatively, if muggles had said, “All wizards are evil and must be destroyed,” that would have been a clear example of wizardophobia, and would have been equally useless, because it would have stirred up hate, without focusing on the wrongdoers.

However, imagine if muggles had said, “Death Eaters killed innocent people. The Death Eaters are evil and must be destroyed.” Saying those words would have been pitch perfect. Moreover, that was precisely what the non-Death Eater wizards in Harry Potter’s world were saying and doing — and that’s how, in they end, the good guys won in a war that evil doers forced upon them . J.K. Rowling may be just another British Leftist, too scared even to stand by the rare occasion when she voices a true moral principle (when pushed, she stated that she supported the Palestinian’s libelous claims against Israel but added that she opposes the BDS movement so as not to hurt innocent Israelis who are victims of their own government).  Still, when it comes to her art, she is true and honest.

So please don’t use passive voice when you talk about Paris or the next jihadist attack or the one after that (because you know there’ll be more). If we are too afraid even to name the enemy (and I consider anyone who wants to wage war to kill peaceful citizens, including me, to be an enemy), how the heck are we supposed to defeat it?