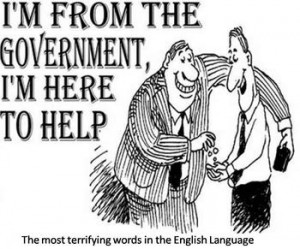 I’ve had a busy day that’s precluded writing, but I have been thinking — and what I’ve been thinking about is government coercion.  Three things floated across my radar, all of which touch upon the topic.

I.  Government Coercion and Religion

The first thing that got my goat was a much lauded video in which Dutch people were read a violent religious text that they were told came from the Koran.  The big surprise, of course, was that the text came from the Bible.

“Hah!” said all of my Progressive friends who gleefully linked to that story.  “All religions are equally violent and Christians are just hypocrites to call out the Koran for excessive violence.”

As far as I can tell, the only thing that little video shows is that, as Shakespeare rightly said, “The devil can cite Scripture for his purpose.”

Yes, there are some bizarre and weird passages in the Bible.  Jonathan Kirsch has written a rather fascinating book, The Harlot by the Side of the Road: Forbidden Tales of the Bible

, that discusses many of these tales in the Old Testament.  He posits that many of these tales, such as the one about God attempting to kill Moses until his wife, Zipporah, used a stone knife to circumcise their son.  (Exodus 4:24–26.)

The standard interpretation is that circumcision is really, really important, but it’s definitely a short, wacky little interlude in the Exodus story.  If I remember correctly Kirsch posits that it may be a fragment of an ancient tale far pre-dating the Jewish Bible that then somehow got intermingled with the rest of the oral history.

So, yes, there are strange things in the Bible, and there is a lot of war and death.  But here’s the thing:  The Bible is a history.  God is an actor in that history, and he periodically issues very context specific instructions to the ancient Israelites, but it’s still a history.  We’re supposed to take lessons away from the book but, when it comes to how Jews are to treat third parties, for the most part it leaves people remarkably free to draw their own lessons and make their own choices.  Think about the Ten Commandments:  But for “Honor they father and thy mother,” which is an affirmative duty, everything else is phrased in the negative, including “thou shalt have no other God before me.”  There are vast areas of human endeavor in which the Bible gives moral guideposts, but no clear directives.

Rabbi Hillel reflects this same thing in his formulation of the golden rule:  Do not do unto others as you do not wish them to do unto you.  Again, Jews are not told “do this and do that.”  They’re just told to avoid certain bad behaviors, and otherwise are free to make their own choices.  As for the hundreds of specific rules in Leviticus, for the most part, they are what might be called procedural rules for living and worshiping as a Jew.

But wait, I hear people ask “What about the order to kill homosexuals and witches?  The Bible is quite explicit in that regard.”  That’s correct.  And modern, Western people ignore those directives.  We no longer believe in witches and we simply do not act on the commandment to kill gays.  (Although one can understand why so many fundamentalist Christians, when AIDS first emerged, concluded that God was taking the matter into His own hands.)

The Biblical God primarily provides guidance through the lessons of history.  He rewards and punishes people for their witting or unwitting choices (or, in the Book of Job, for random reasons), but he doesn’t micromanage.  God is not a helicopter parent nor is he a drill sergeant.  To the extent the Bible has violent, cruel passages, they either repeat historical facts or we, as a culture, have decided to ignore them.

The Koran is entirely different.  It consists of hundreds of mandatory behaviors that Mohamed imposes upon followers.  They affect not only Muslims, but also anyone within the Muslims’ ambit.

These rules demand death for Jews, death for female adulterers, death for homosexuality, death for blasphemy, and death for converting to another faith.  They require conquered peoples to convert to Islam at sword point, or to be killed or enslaved.  Even if they are directly enslaved, conquered people must pay a special tax to their Muslim overlords.  Child marriage is sanctioned, and women are reduced to sexual chattel.  None of these are small rules, tucked away in the dark corners of the Koran.  They are prominently placed and are a required part of compliance with the Koran’s dictates.

Moreover, thanks to Saudi money for the last forty years, these rules are the dominant trope in Muslim communities the world over.  Even those communities that once practiced a fairly anodyne Islam have been infected by the Wahhabi virus and have reverted to a literal and blood-thirsty Koranic mode.

Taking Biblical verses out of context and then pretending that they prescribe a modern code of conduct similar to that practiced by so many Muslims the world over is ridiculous.  While the Jewish Bible is primarily a history book and morality tale, with occasion unpleasant commands that are easily ignored in modern times, the Koran is a mandatory instruction book that has government coercion at its heart.

The next thing that got me all hot under the collar is the Left’s casual acceptance of government coercion as a moral standard.  One of my friends put this on her Facebook page: 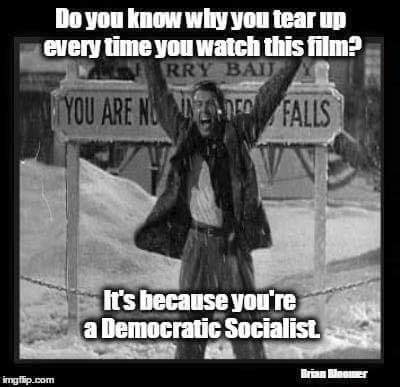 I’ll admit that it’s been a long time since I last saw It’s A Wonderful Life, but I’m pretty damn sure that, when Clarence gave George Bailey the chance to see what his town would have been like without him, George’s lesson wasn’t that Big Government is the answer. Instead, George learned that an individual’s choices and the moral guidance flowing from a single individual can change people’s minds and affect their choices too.

Potter was Big Government, trying to bully people and coerce them. George was individual liberty, encouraging people to come together freely. The whole point of the movie is that bullying coercion is wrong, and that it’s each individual’s own choices, including the choice to band together for economic power, that matter. Only a Leftist could see that movie and conclude that it stands for government coercively taking money from one citizen to pay to another who promises lifetime fealty in exchange for that redistribution.

And finally, my governor in action:

One of the goals of Californians who traveled to Paris for climate talks this week was to showcase green-energy businesses that are succeeding in the state.

But on Monday it was the “coercive power” of government for which Gov. Jerry Brown was seeking credit.

Regulations, he said at an event with billionaire environmentalist Tom Steyer at an art museum in the city, “work hand in glove” with innovation, forcing companies to adapt to cleaner technologies. Brown held out the introduction of the catalytic converter and the proliferation of renewable energy as examples of industry responding to regulation.

“You do have to have, at the end of the day, a regulation, a law,” he said. “Progress comes from well-designed regulatory objectives that business then follows.”

Later, at the site where world leaders are meeting to negotiate a climate pact outside of Paris, Brown urged a small crowd to “never underestimate the coercive power of the central state in the service of good.”

“You can be sure California is going to keep innovating, keep regulating,” the Democratic governor said. “And, shall I say, keep taxing.”  (Emphasis mine.)

Brown is drunk with greenie power.  As for me, when I think of state coercive power that hasn’t been underestimated, I think of Soviet Russia, Nazi Germany, North Korea, Saudi Arabia, and other places that rely on government bullets rather than people’s ballots.  Brown’s delusional statement to the contrary, when the central state exercises its coercive power, no good has ever flowed from it.