I found myself in conversation today with a Progressive who thought that Obama’s oval office address was just wonderful.

“What did you like about it?” I asked him.

“It was a very mature speech,” the Progressive replied, “and he said what I would have said.”

Of course I asked, “What would you have said that he did say?”

“That we’re doing everything we can against ISIL, but that almost a quarter of the world’s population is Muslim and they’re not all our enemies.”

“That’s it? That’s what you got out of the speech?”

“Yeah, it was really good. I bet you hated it.”

And then I was off. I detailed the problems with Obama’s affect — flat in the beginning when he had to concede that this was terrorism (although Obama hastened to add that it wasn’t really Islamic and Neo-Neocon thinks he may not even have said it was terrorism), and hectoring in the end when he scolded Americans about their prejudice, which they’ve never acted upon, and their guns which . . . well, let’s just say that Obama doesn’t want to see another Texas happen: 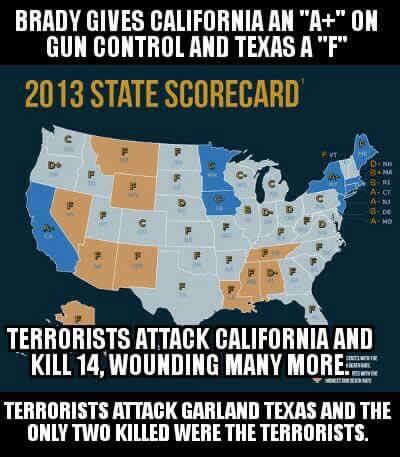 I explained that, much as Obama would like to pretend that “real” Islam has nothing to do terrorism, the fact remains that for decades now, around the world, terrorist acts are in keeping with either the violent Wahhabi Islam that Saudi Arabia has been selling everywhere or the violent Shiite Islam that Iran has been funding everywhere. There’s nothing on the fringe about what they’re doing. This is mainstream stuff. The fact is that, contrary to what my Progressive friend would like to think, sizable numbers of the world’s Muslims are not our friends: 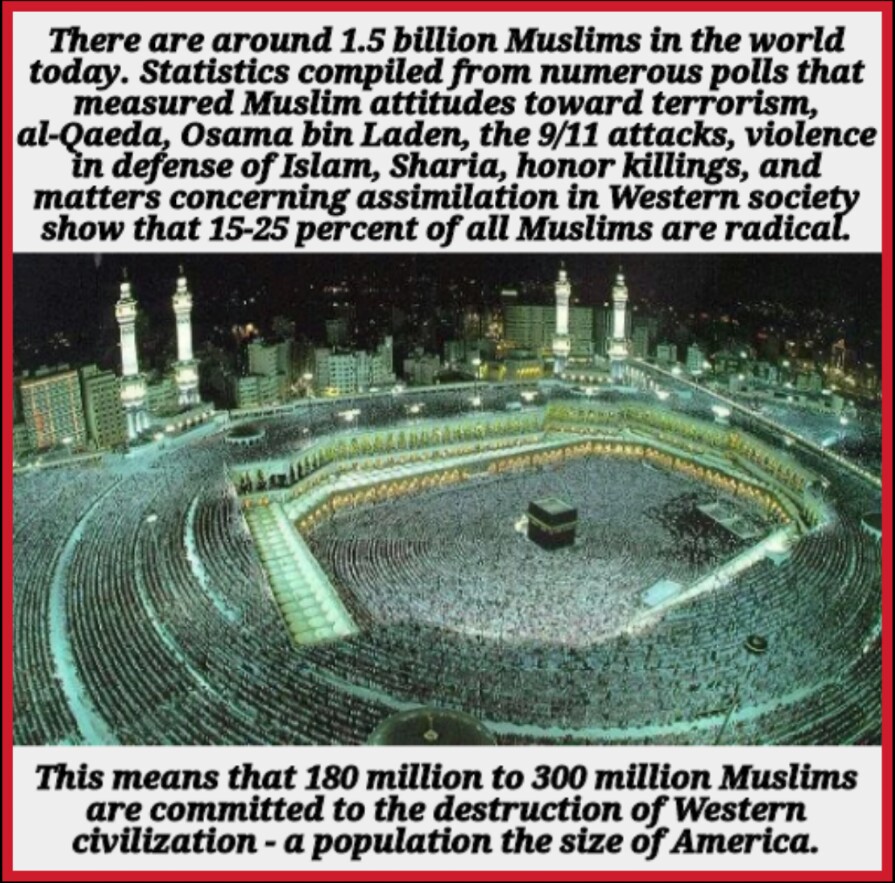 I pointed out that Obama had just admitted that what we’ve been doing so far is ineffectual to slow ISIS on the ground or keep terrorism from spreading at home (indeed, it’s as bad as it’s been since 9/11).  He also admitted that he was only now formulating a plan for the same problem that made a big noise on 9/11 and that has been cropping up with increased regularity on Obama’s watch.

I acknowledged that I agreed with Obama that the countries directly in ISIS’s path, or already burdened with a large ISIS presence, need to step up to battle. The reality, though, is that through incompetence, complicity with ISIS, or fear of ISIS, they’re not able or willing to do so. Our efforts in that regard have been pathetic. In Syria, we managed to piddle away $500 million on four or five fighters. Also, whether because of cultural differences or because of problems from inbreeding, prenatal malnourishment (especially during Ramadan), or profound cultural differences, it’s proving hard for U.S. troops to train even willing locals:

The most effective fighters against ISIS are the Kurds, but Obama is giving them minimal assistance, probably because he doesn’t want to offend his buddy Erdogan. So, even if the principle of local fighters is a good one, the practical reality is that they either can’t fight or we won’t help them.

I noted that Obama’s rules of combat are such that, even when we know where hard targets are — such as ISIS munitions depots, recruiting stations, and headquarters — we don’t target them thanks to over-the-top rules of engagement. It turns out that although we’ve had many chances to hit ISIS really hard economically by targeting oil tankers and wells, Obama has also refused to authorize those strikes because climate change.

From Obama’s inchoate, ineffective approach to ISIS (which has nothing to do with real Islam, according to Obama), I moved to the way he hectored Americans for Islamophobia, even though, barring a few scattered yahoos calling names or scrawling graffiti, Americans have never done anything remotely Islamophobic. I pointed out that, if there is religious violence in America, it’s the accelerating religious violence against Jews, violence that often emanates from a minority of America’s “peace loving” Muslims.

By now, the Progressive’s eyes were completely glazed over, so I swiftly passed on to savaging Obama’s plan to tie gun prohibitions to the No-Fly list, which I explained is nothing more than a list of un-vetted names. The Progressive actually got a little surprised when I said the late Teddy Kennedy was on that list because he shared a name with someone. The No-Fly list is meaningless and is an impossible basis for destroying Second Amendment rights.

I was on a roll, but the Progressive finally got a word in edgewise. When he did speak, he shocked the heck out of me.

“I just wanted to know what you thought about Obama’s speech. All that stuff you said had nothing to do with his speech.”

Whoa, Nellie! Apparently I was supposed to accept Obama’s speech entirely at face value. I was supposed to understand that the facts he assumed were real facts, the values he advances the only values, and the plans he has are workable plans. To interrupt the purity of Obama’s world with actual facts . . . well, it wasn’t even worthwhile for the Progressive to challenge me because, to him, facts had nothing to do with anything Obama said.

How do you argue with someone like that? With that one statement, that Progressive gave me a complete snapshot of the decline of the American mind: John Adams said “Facts are stubborn things.” Daniel Patrick Moynihan said “You are entitled to your opinion. But you are not entitled to your own facts.” And my Progressive friend said “Facts have nothing to do with anything our President says, so long as he sounds good.”

You can imagine, then, that it came as no surprise to me to learn that Progressives are lauding a new intellectual leader in their midst:

In a weird way, though, the dildo-for-a-gun protests are the quintessence of Leftist statist thought. As I’ve argued at some length before, Leftists focus relentlessly on sex, not because they’re romantic, but because the thought leaders understand that bringing sex into the government fold destroys individualism:

(I think that’s one of the best posts I’ve ever written so, if you like my writing and thinking, and you haven’t yet read my American Thinker article about sex and state power, check it out.)

Privately owned guns, of course, are the essence of individuality. With a gun, you are your own person. You can defend yourself. You may not always succeed alone but you are free to associate with other like-minded individuals to create a stronger defense. You then become a powerful cohort of individuals in Garland, Texas, rather than helpless targets, as in San Bernardino, or Fort Hood, or Tallahassee.

And that is why it’s impossible to have an intelligent political or social issues debate with a Progressive.