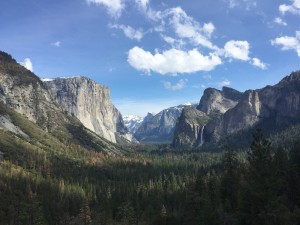 I’m baaack! We returned from our weekend trip to Yosemite late last night. Having disposed of the four loads of laundry the family managed to generate with three days of travel and two days of hiking, I’m ready to blog — and what I want to blog about is the way in which the National Park Service (“NPS” or, as I periodically think of it, the Nazi-o-nal Park Service) teaches about freedom and the free market.

I should start by exposing my bias: I’m completely un-American in that I don’t like Yosemite. I’m certainly impressed by Yosemite. The gigantic solid slabs of granite that reach hundreds of feet into the sky should impress anybody. It is a magnificent example of Nature’s raw power. I had to stop myself from laughing every time Mr. Bookworm reminded the kids that the vast walls rising above us, and the monstrous granite boulders strewn on the valley floor were all products of retreating glaciers. I kept wanting to shout out “Global warming! Climate change!” I kept quiet, though. He’s a true believer and he will always believe that this century’s experience with slight warming and climate change is not part of a natural pattern but is, instead, all our fault — with the only remedy being living in a cold house and buying taxpayer subsidized electric cars.

So, as I said, I’m impressed by Yosemite and appreciate how climate change can alter the landscape. However, I find the valley floor incredibly drab and oppressive. Unlike Lake Tahoe, with its sparkling, light gray granite, its deep blue lake, and its strong green trees, all the colors in Yosemite are flat and dark. Lakes are brownish, the granite walls pressing in from either side are a dark, grim gray, and the trees are what green would look like if all the light were sucked out of it. When I’m in Yosemite, I’m impressed, but I’m also depressed. The palette is just so grim and the walls so over-bearing and oppressive.

Yosemite is also so very National Park. Everywhere you go, there are signs about how we white Americans destroyed the native Miwok population and how, until modern science knew better, we also despoiled Yosemite’s natural beauty. I’ve written before about the constant scolding, hectoring, and insulting that characterizes America’s National Parks and that tone is very present in Yosemite. As a visitor in the park, you are allowed to stay on the trails and climb the granite — and that’s all. The park may belong to the American people, but the park’s steward (i.e., the NPS) is going to make damn sure that the people enjoy it as little as possible to ensure that Nature is ascendant.

I was made especially aware of the limitations the NPS places upon hapless members of the public when I attended a brief talk by Ansel Adams’ son, Michael. Michael had pictures of park visitors in the 20s and 30s taking burro rides into the back country, ski-hiking all over the park, taking horseback rides, and engaging in all sorts of other fun winter activities. (You can get an idea of what some of these were by watching this song from 1941’s Sun Valley Serenade.”) All those activities are banned now. Adams’ son seemed resigned to the change, but mourned the wonderful burro trips.

The reality is that, under the NPS, the national parks, rather than being for the nation, are for the NPS. They have become so invested in keeping them pristine, they really would prefer that no one visit them at all.

But I promised to explain the market freedom issue. . . .

The four-thousand-foot-high granite crest of Half Dome, which looks like a bell cut clean down the middle, towers over lush, forested valley at the heart of Yosemite National Park. It is a sight to see — arguably the most recognized sight in the 745,000-acre expanse of sequoia-studded canyons and lofty mountain peaks.

But Yosemite doesn’t own it.

Or at least, the park doesn’t own the famous Half Dome image that’s become a fixture on water bottles, keychains and all manner of other park paraphernalia. That trademark instead belongs to Delaware North, the company that until recently ran hotels, activities and concessions at America’sfirst federally-designated park. And when Delaware North left Yosemite this month — having lost its concessions contract and then filed a lawsuit over the bidding process — it took the Half Dome logo, other famous place names, and some uses of the very phrase “Yosemite National Park” along with it.

Now, an ugly legal fight over naming rights is unfolding in this beloved wildernesses. On one side, there’s the U.S government, which claims that Delaware North surreptitiously accumulated those iconic trademarks during the two decades it managed Yosemite’s concessions and is now demanding that the park pay to get them all back. On the other side, Delaware North says that it is only asking that the new concessionaire pay full value for the intellectual property it’s getting along with the park’s horse stables and hotels, just as Delaware North once had to do.

I’m less interested in the legal fight than I am in the fact that the NPS gave one company two decades of total control over food and lodging in the park. It eventually fired Delaware North because the food and the lodging were awful. Then, the NPS promptly turned the whole kit-and-kaboodle over to another lone company.

What the NPS fails to grasp is that, when there’s a monopoly, goods and services will always be substandard. Why should the concessionaire provide better food and lodging when it’s the only game in town? So what if the morning scrambled eggs are dry and have a weird fishy taste, if the bacon is rubbery, and if the oatmeal is flavorless glop — you’ll eat it whether or not you like it, because there’s nothing else to eat.

Thanks to the change of concessionaire, our bedroom had a newly remodeled bathroom, for which I was grateful. I can guarantee, though, that in a few years, that bathroom will be ragged and stained, and that nothing will be done about it because monopoly. If you want to stay in Yosemite Valley, you go with the new concessionaire, or you don’t go at all. So you’ll put up with a shabby, vaguely dirty bathroom and a very high room rate (almost $600 for two nights) because monopoly.

The virtue of this monopolistic experience was that the kids finally got a first-hand insight into why I’m so deeply opposed to having the government control things. They suddenly realized that the free market increases quality and lowers prices because they saw in real-time how a monopoly inevitably leads to decreased quality and higher prices. For that reason alone, spending 14 hours in the car and almost $600 to be in that gloomy valley for two days was all worth it.

And on a side note, I decided I must be doing something right. Completely on his own, without any help from me, my Little Bookworm discovered Steve Crowder and Milo Yiannopoulos — two young conservative guns who make conservative cultural stands that resonated with him. So it was that, completely unprompted, my teen told me, “You have to see these videos Mom”: