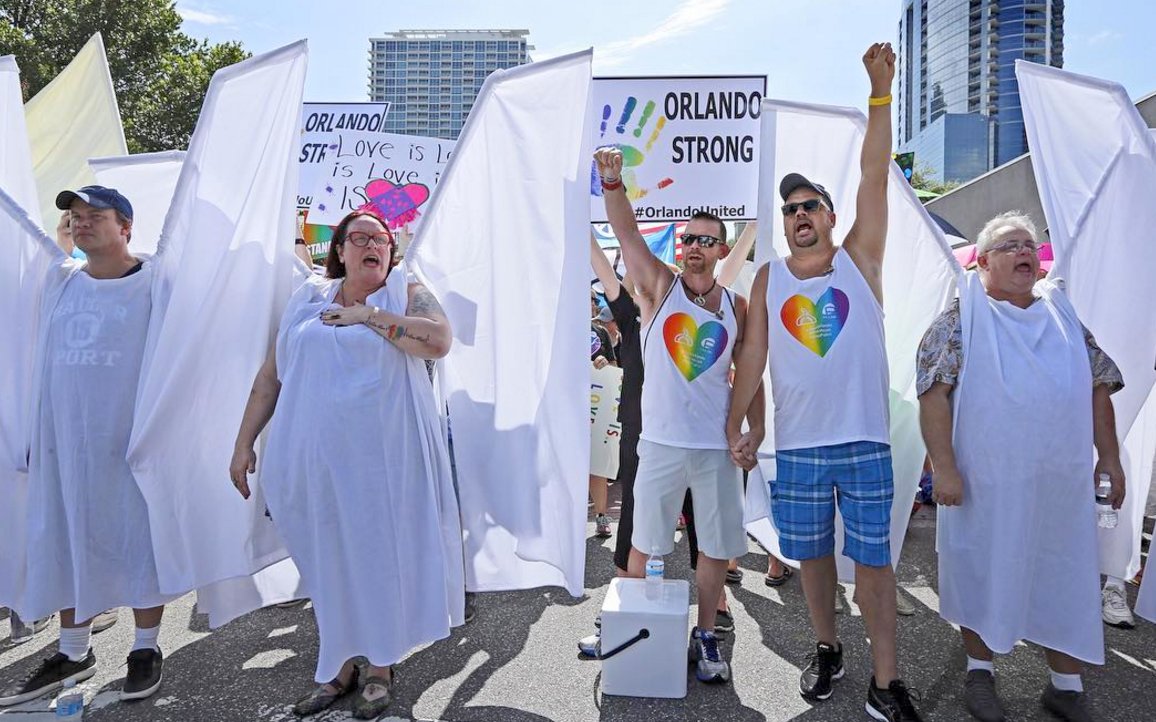 A collection of pictures has been circulating on my real-me Facebook feed, a feed mostly populated by Progressives (thanks to a lifetime spent in Progressive strongholds). The Progressives who post it are very proud of themselves when they share these images of costumed “angels” taking a stand against the Westboro Baptist Church protesters who inevitably showed up in the aftermath of the Orlando shooting: Here’s the reality: The Westboro Baptist Church is tiny, with only about 40 members. It is not recognized by any mainstream Christian church, including Baptist or other fundamental churches. So far as I know, the church members have never committed an act of violence: no shootings, bombings, stonings, stabbings, beheadings, or even punchings. They are disgusting and cruel, but otherwise completely harmless.

Meanwhile, Islamic fundamentalism is huge, with 10% of the world’s 1.6 billion Muslims pledging fealty to active violence for the cause and another 30-40% supporting it in theory. Except for a handful of brave people like the wonderful Zhudi Jasser or Ayaan Hirsi Ali, other Muslims do not disavow them. That is, rather than saying “Those fundamentalists are a disgraceful segment of Islam and need to be destroyed, root and branch,” the non-fundamentalists tend to say one of two things (if they say anything at all). The first thing they say is “I’m not like that,” which is nice to know, but which doesn’t address the root problem. The second thing they say is “We are not violent, and if you keep saying we’re violent, we’ll kill you,” at which point Progressives meekly say “See, we told you so. Islam has nothing to do with violence.”

The Muslim view about violence reveals itself in a world-wide orgy of bombings, shootings, beheadings, stabbings, beatings, crucifixions, and anything else a sick, sadistic imagination can put into effect. I won’t lard this post with examples. You can find proof of what I say here, at The Religion of Peace. While the Westboro Baptists carry around nasty signs castigating gays and the military, these Islamists actually visit gruesome deaths on gays and the military — at least when they’re not targeting Jews, Christians, Hindus, the “wrong” kind of Muslims, women, apostates, dancers, tennis players, and anyone else who runs afoul of their vicious world view.

So tell me this — how virtuous are you if you protest a tiny, disgraceful, entirely non-violent group of crazies, while assiduously ignoring a gigantic, disgraceful, explosively violent group of religious fanatics? Looked at it this way, it’s clear that the people who congratulate themselves for “taking a stand against” the Westboro Baptists aren’t brave and virtuous at all. Instead, they’re cowards who engage in frenzied virtue signaling, all the while pretending that the really horrible people who walk among us don’t exist.

I probably should add here, lest anyone misunderstand, that I find the Westboro Baptists loathsome. However, unlike our friends on the Left, I understand that they’re exhibitionists, desperate for attention. The best way to destroy them is to ignore them out of existence, rather than for Progressives to feed their own egos by giving the Westboro Baptists the limelight they crave.