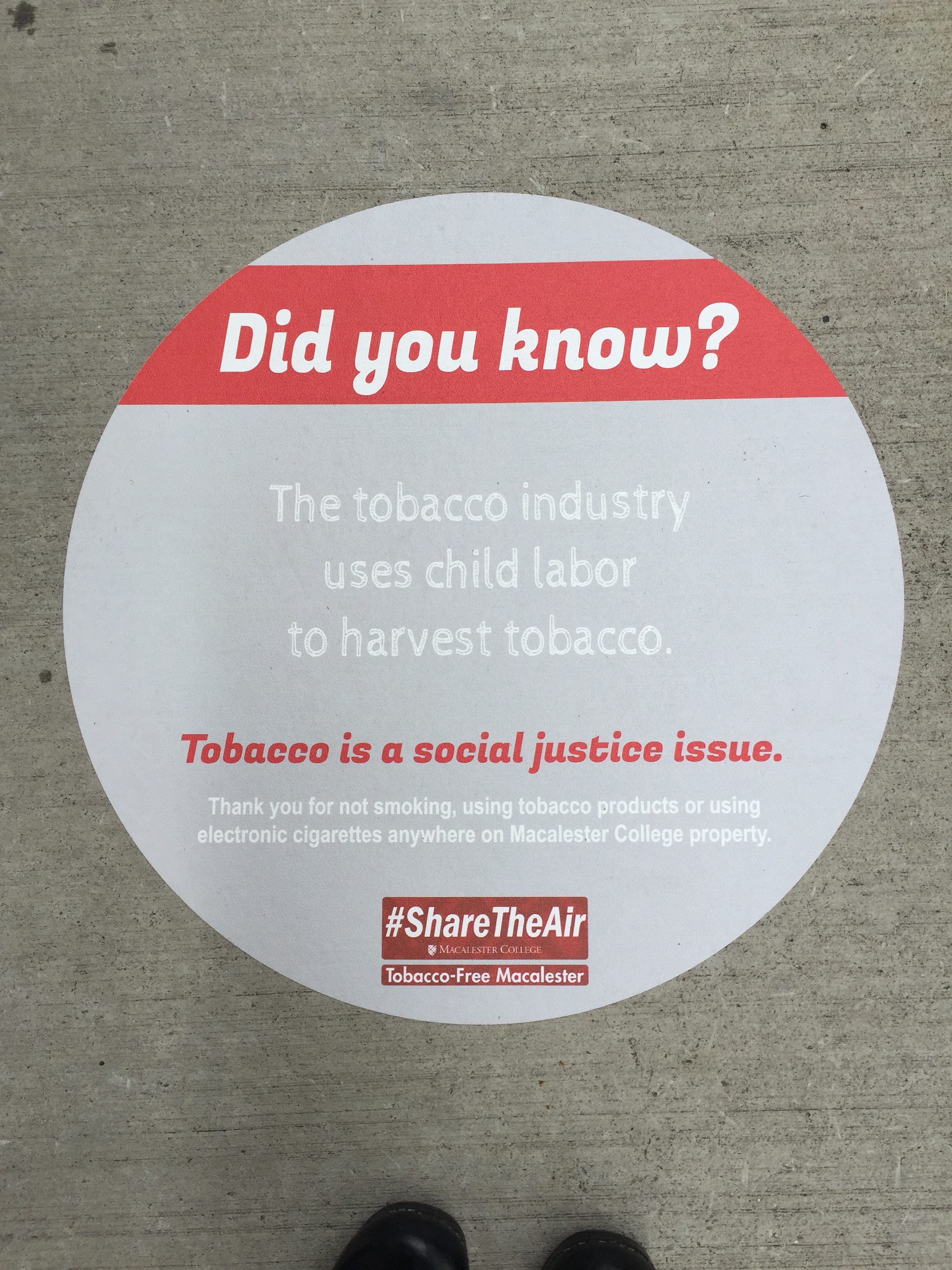 Today was move-in day for my Little Bookworm, who is starting at an obscenely expensive liberal arts college (“OELAC”) in the Midwest. The day went well until the academic machinery started in motion.

There are some nice things to say about OELAC — the campus is meticulously maintained and beautifully landscaped, which is as it should be considering the ridiculous expense. Also, the move-in process was extremely well-organized, and cheerful student volunteers were of great help with the heavy bags and such.

Things were going so well that I was able to accept with equanimity the anti-smoking propaganda all over the place. As you can see from the photo illustrating this post, cancer is out as an anti-smoking cudgel and “social justice” is in.

I found this heavy-handed hectoring ridiculous because (a) it’s a smoke-free campus to begin with and (b) the little social justice warriors/students are all middle-class non-smokers. I was, therefore, almost inordinately glad when I stumbled across one of the signs enveloped in the smell of cigarette smoke. Normally I loathe the smell of cigarettes, but I loved the idea that, whether it was a parent or student, there was a renegade hiding on campus.

From my point of view, things really started to fall apart when the parents were ushered into a large hall to await the arrival of the students and the administrative welcome.

I was sitting in the back of the hall checking emails when processional music started and all the parents surged to their feet. Glancing up, I saw an American flag pass by, so I thought to myself, “Ah, I was wrong to be so cynical. It’s a patriotic moment,” and stood up myself.

It turned out that I was wrong about being wrong. The students were parading flags of the many nations – I think about 90 – that are represented in the school’s population. That was fine — nice, in fact — but I did not see that it was appropriate to remain standing so I sat down. I was the only person sitting.

Eventually, I realized that the other parents might’ve been standing for reasons other than to salute the flags of many nations. Immediately after the flags, the entering freshman class slouched its way into the room and headed for the chairs at the front of the room. The parents were standing so that they could videotape their little darling walking into the auditorium.

The students looked embarrassed and I was embarrassed for them. They have accomplished nothing as of yet. This was like a preschool first-day-of-school parade. It was utterly inappropriate for young adults about to embark on their education. Speaking of education, worse was to come.

Seated on the stage were four women and one man. One of the women stood up and gave what I realized at the end, after she said “amen,” was an invocation. The only deity to which she referred was each students’ little navel. Relying on a letter the poet Rilke sent to a young poet, she urged each student to look inward, inward, ever inward. She then muttered something about (I kid you not) deep springs and love-drenches. Amen.

Next came the school president. He boasted about the fact that the school offered the best education in America, something he has to say, of course, but which I know is not true. I have read the illiterate offerings from the administrative staff and the faculty. If this is the best America has to offer we are in very poor shape indeed.

The president then offered to the parents in the audience the same advice I got when my children started preschool (again, no kidding): Every child is different; the children will learn something; and they still need their mommies and daddies.

The president did say one thing to the students which I thought was smart: he told them that he hopes that these are not the best years of their lives because it would be a sad life to peak so young. I think that’s an admirable sentiment and I hope it was something the children listening understood. (And you will note I use the word “children.” I do so because that’s how they were being treated.)

The president added the usual stuff of multiculturalism, and justice (of the social kind, of course, not biblical or legal), and the obligation to go out and do good. The most interesting point for me was when he said that the school has four times as many staff members as it has students. I assume these staff members run the gamut from administration, to faculty, to janitors, to gardeners, to engineers, to anybody else who works there. That, to me, is a staggering imbalance that helps explain the heinous fees.

Fortunately, the president’s speech was short, as was the provost’s. I can’t recall what she said other than stating that she was an economist (ah! maybe some intellectual rigor) whose speciality is economics of gender (phooey! Another self-referential, tribalist academic).

After the provost came a Vice President of something or other, whose first words after she introduced herself were to say that “her pronouns” are “she and her.” I instantly wanted to leap up and announce to the room at large that my preferred pronouns are “Majesty” and “Highness” and I don’t want anyone to forget that. I restrained myself.

Was is it any surprise after that introduction to have the Vice President state that the school prides itself on its diversity? I can tell you from observation that it had skin color diversity, religious diversity, and sexual orientation diversity, but I’m willing to bet that every single teaching mind there runs along a single ideological track. Moreover to the extent that the Vice President insisted students should open their minds when it comes to such things as abortion, global warming, gay marriage, and interracial dating, I have no doubt that she was telling the many foreign students to get with the Progressive agenda.

Honestly, the Vice President was hard for me to track. She spoke in anodyne Progressive phrases, with a slightly hectoring rhythm that just seemed to filter straight through my brain without sticking. I think she lost me with her pronouns.

The V-P wound up her oration with a long quotation that I’m sure I’ve read before on one of those inspirational posters that are common fare on Facebook. It had all the depth of a Hallmark card, with its banal exhortations to simple acts of kindness and personal self-fulfillment.

The final speaker was a senior class member who talked about herself. It was a sweet, immature, and utterly forgettable little paean supporting the old adage that if at first you don’t succeed, try, try again. I guess that narcissism is unsurprising in a 21-year-old. It was less charming coming from the administration.

My overall sense was that this was an appropriate event for a graduating class of five-year-olds. No one urged these young people to get out of themselves, to think in terms of big things, to be grateful for what they have, and to value their citizenship, not “of the world,” but in America. They were not encouraged to achieve outward-looking greatness; they were told to strive for self-involved littleness.

The evening ended with a prayer for peace, recited in four different languages, one of which was English. It wasn’t a prayer to a deity, of course; instead, it was more of a wish list.

Even as a wish list it wasn’t much. It didn’t ask for goodness or wisdom or humility. Instead, it was re-cycled flower child stuff, straight out of the Haight-Ashbury district in the 1960s. Thus, the students asked earnestly for a just and peaceful world, fellowship, friendship, and hope. It was hippie talk filtered through Hallmark.

A few other observations: Most of the boys I heard sounded vaguely feminine because they turned all their sentences into questions — the way girls traditionally do — by having a rising inflection at the end of each sentence. Speaking of boys and girls, there also seemed to be many more girls than boys on campus.

I also hadn’t expected to see quite so many burqas and hijabs in the Midwest. I wouldn’t mind this expression of religious freedom but for the fact that so many of these women’s co-religionists have blood-thirsty aspirations. I am a little nervous when I see such large congregations of Muslims knowing that so few of them will take a stand against their violent fellows.

After a couple of days at an OELAC in the Midwest, even California starts looking pretty good.