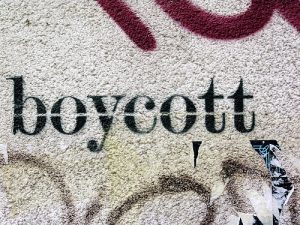 The number of American and overseas businesses joining in the boycott against Breitbart and other so-called “racist” outlets continues to grow, so it’s important that we continue to #BoycottTheBoycotters. What these companies are doing is the same thing that businesses in the South did: At the behest of ignorant, hate-filled people, they are closing the door to customers they deem unworthy. The merchants’ voluntary participation in commercial apartheid greatly contributed to the Jim Crow South’s perniciousness and longevity. This has to stop and we need to move hard to make it stop.

As many of you have pointed out, there are other businesses waiting to take the place of those who have announced war on half of America. But here’s the thing: Unless we stop giving our money to those businesses that have decided we’re the new American blacks — “you can’t sit in our restaurants, buy our goods, stay in our hotels, use our services” — those business that are better, more liberal, and more open-minded aren’t going to have the opportunity to move in and move up. Any change has to start with us.

Here’s the latest chart of businesses that have declared that America is a Jim Crow nation and that conservatives are the new blacks. The businesses highlighted in yellow — more than 30 — are those that have joined the boycott against ordinary Americans in just the past two days! (Click on image to enlarge.)

My previous posts calling on conservatives to #BoycottTheBoycotters are here and here.

The twitter page that’s driving this Boycott is here. Their running list of Jim Crow businesses refusing to server conservative customers is here.