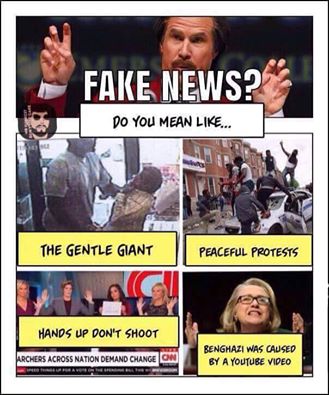 Facebook just announced that it will start cracking down on what it calls “fake news.” We know what that means: It will block anything that does not toe the Democrat party line. To this end, it’s teaming with such hard-Left luminaries as Snopes, the Associated Press, and ABC to identify what constitutes “fake news”:

To combat fake news, Facebook has teamed up with a shortlist of media organizations, including Snopes and ABC News, that are part of an international fact-checking network led by Poynter, a nonprofit school for journalism in St. Petersburg, Florida.

Starting as a test with a small percentage of its users in the US, Facebook will make it easier to report news stories that are fake or misleading. Once third-party fact-checkers have confirmed that the story is fake, it will be labeled as such and demoted in the News Feed.

Technically speaking, Facebook is a private corporation and can do whatever the heck it wants. In reality, though, Facebook is a major news purveyor, much in the way the big broadcasters are (or used to be). It might be useful to have the FCC investigate whether it can block Facebook’s plan to censor political content it does not support.

Government action is always slow, though. What’s also slow is the lead-time needed for conservatives to build up another social media outlet through which they can disseminate information and news of interest to conservatives. In the meantime, I suggest that everyone start following the reverse “Oprah Rule.”

What’s the “Oprah Rule”? I have a hard and fast rule that if Oprah ever recommends a book, I will not read that book. Not only do our reading tastes differ, I consider her a significant factor in America’s dumbing down. Her doe-eyed emphasis on feelings helped turn from a somewhat logical and rational nation into one that’s entirely guided by self-referential emotion. To the extent the Left uses feelings to silence anything with which it disagrees, she was the on-ramp for the feelings revolution. I don’t want to give any monetary support to books that please this purveyor of mindless emotion. I also don’t want libraries to have one more person making the book look popular or successful.

If that’s the Oprah Rule, what’s the “reverse Oprah Rule”? The reverse of the Oprah rule is that conservatives should make a point of reading, sharing, liking, linking, and doing anything else they can when they spot a reputable conservative news site labeled as a “fake.” Conservatives need to do their own little Cloward-Piven against the Facebook system. If this works, not only should it overwhelm the system, it should also send some useful revenue towards conservative news sites. In keeping with that, I hereby volunteer to have my posts put at the head of the line for being labelled as “fake” news on Facebook.

So if you see the word “fake” on something from Breitbart, or the Daily Caller, or the Daily Signal, or FrontPage Magazine, or Project Veritas, or National Review, or on any reputable purveyor of conservative thinking, press that “like” button, “share” the story, go to the source website (which brings revenue to the site), share the news on your blog, tweet it, and do whatever else you can think of to offset Facebook’s censorship. Meanwhile, it’s time for some technologically sophisticated conservatives to create a social media outlet in which conservatives will not be smeared, downgraded, or censored.