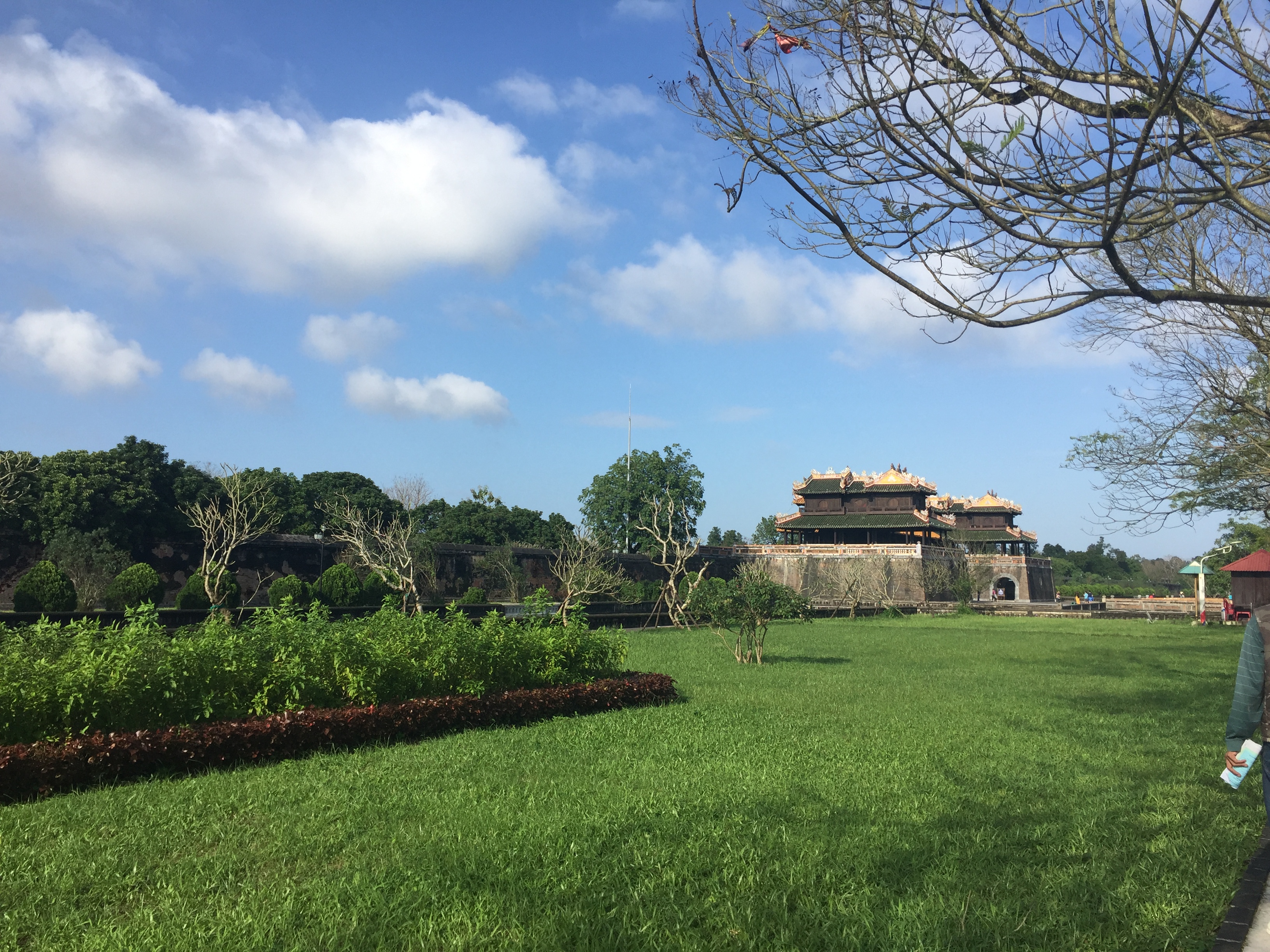 We spent two days in Hue, Vietnam. Looking at this peaceful city, it’s hard to believe that it was the site if the Tet Offensive — a place where our troops won the battle and our government lost the war.

Hue has an ancient Citadel, which was both a military enclave and an imperial palace. Some of the heaviest fighting during the Tet Offensive occurred there, so large sections were completely leveled. Some parts remained, either unscathed or reparable and the Vietnamese have been working over the past few years to make those repairs. The place is lovely, both sad and gracious. I would love to show you pictures, but the internet is so slow that I consider myself lucky to be able to write about the place.

Four days ago, we visited the War Remnants Museum in Saigon, which is the Viet Cong version of the war. It’s factually accurate, although slanted to show the Americans as mass slaughterers — which is to be expected, because to the victors belong the narrative. Of course, the word “victors” in this case is one I choose carefully, because the US won the war on the ground but, as it has since the Vietnam War, abandoned the fight in the court of public opinion and, therefore, effectively lost the war anyway.

One of the interesting things that the museum admitted was that the Viet Cong violated the Paris Peace Accords because of Watergate. Back in 1973, when Kissinger negotiated a Korea style peace treaty with the Viet Cong and the democratic (and painfully corrupt) South Vietnamese, the museum says that the VCs intended to abide by the agreement because they were scared of Nixon. That is, they expected rough treatment if they violated the Accords.

According to the museum, all that changed when Nixon resigned following the Watergate scandal. The VCs (correctly) assessed Ford as weaker than Nixon, and that was the green light they needed to invade South Vietnam and conquer the country. The lesson I drew from that is that, as we’ve seen with Obama and the Middle East is that weak presidents are dangerous to peace. Bad guys need to be afraid of the good guy, not comfortable walking all over him.

The second interesting thing was that our guide admitted that the VCs lost the Tet Offensive, adding that the Americans lost the war anyway because “the political climate changed.” His statement led me back to something I wanted to explain to the Little Bookworm who’s on the trip with me.

Wars, I said, are often won and lost, not on the battlefield, but amongst the civilians. That’s why Sherman’s march through Georgia was what was needed to end the Civil War. As long as Southern civilians supported the war, their soldiers would just keep fighting until they could fight no more.

In the 1960s and 1970s, although the battles took placer in Vietnam, the real war was between America, on the one hand, and the Russian Soviets and Chinese Communists on the other hand. While the bloody military battles themselves barely reached America’s civilians, the communists were able to do something that Americans were unable to do: namely, wage psychological war against the American population.

My parents, who were no fools, never doubted that the entire anti-war, hippie, drug scene originated with the communists. As Ion Mihai Pacepa explains in Disinformation: Former Spy Chief Reveals Secret Strategies for Undermining Freedom, Attacking Religion, and Promoting Terrorism, my parents were correct. The Vietnam War was a two-front war and the anti-war movement was the second front. I’ve often thought that it was Walter Cronkite who really lost the war for America:

There he was, America’s “most trusted man,” solemnly parroting communist propaganda. That was the beginning of the end. Our American youth continued to spill blood in that deadly tropical paradise for another four years, but the war was effectively over then. As the Vietnamese museum suggests, we didn’t lose the war in Vietnam, we lost it at home.

Reagan was a temporary antidote to the terrible mental and moral collapse we suffered as a result of this hidden home front war. Let’s hope Trump can do the same in the face of the unrelenting Marxist culture war that’s been openly waged in America for the last eight years.

I’m sorry that this post is a bit cursory and disjointed. I’ve been able to read on the internet with hotel wireless, but I’ve had problem getting to my own site. Interestingly, I also cannot get either Breitbart or Weasel Zippers, although I can get Drudge, Powerline, and American Thinker. It’s also a bit hard to type and things keep crashing. I’m not whining . . . Just explaining.

I’ll try to write more when I have better internet access (and to post picture then too) but for now this will have to do. Just a little more time and a slightly faster, more stable wireless, and all will be good. Having said that, I’m amazed and impressed that I have wireless at all. Despite being ostensibly communist, the Vietnamese people are born capitalists, and they’re doing their damndest to bring their country into the 21st century.