One of the biggest challenges Trump and the Republicans will face is resistance from a federal bureaucracy composed almost entirely of progressives.  There is no question that they will attempt to thwart Trump however they can, and as the law exists today, it is almost impossible to fire them.  It is a travesty in one respect, since federal employees, by law, are supposed to be chosen without any reference to their political leanings.  Yet, for but one example, almost every hire in the DOJ for the past eight years has one thing in common, impeccable hard progressive credentials.

Firing these individuals — and countless numbers of political hacks burrowed into places like the EPA, NASA and NOAA need to be fired — would seem to be an insurmountable challenge.  But is there a way to perhaps motivate them to voluntarily leave?  Apparently so.  This from The Hill:

House Republicans this week reinstated a procedural rule created in 1876 that allows lawmakers to cut the pay of individual federal workers down to $1, The Washington Post reported Thursday.

The Holman Rule allows members of Congress to propose amendments to appropriations bills that target specific government employees or programs in an effort to cut spending.

Under the rule passed this week in larger rules package, any such amendment that would target an employee or program would have to be passed by a majority of the House and Senate.

Now that could be useful.  Equally fascinating is the man for whom the rule is named, William S. Holman, a very colorful 19th century Democrat Congressman who also happened to be that rarest of congresscritters, a miser with the public purse.  And he was the longest serving Congressman in history.  This from Wiki: 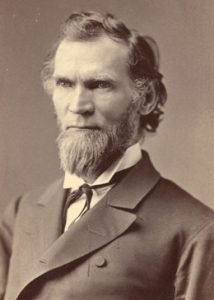 As congressman, Holman was most known for his opposition to government spending, especially in subsidies and aid to private enterprises, notably the transcontinental railroad lines. Throughout the 1880s, he did what he could to have the federal government take back the public lands given to some of the largest companies, which had failed to fulfill the work promised on time. Nor did he have patience with the cattle-barons that had fenced off nationally-owned land as if it were their own domain. That made him the ideal choice to chair the Committee on Public Lands in the 1880s, and his work at forcing railroad companies to disgorge probably restored millions of acres for actual settlers to take up. He hated any kind of government spending, from river and harbor improvements to salary increases for officeholders. “When Mr. Holman takes his walks abroad and sees Government clerks promenading the avenue in coachmen’s coats and toothpick canes he ‘objects,'” a Republican newspaper jeered. . . .

[H]e also fought hard against congressmen raising their own pay, and in 1873 made himself one of the most active opponents of the so-called “back pay” grab, where lawmakers raised their salaries retrospectively. The following winter, he tried to bring the Democratic House caucus into line behind a resolution repudiating the grab, and was so abused that, according to general reports, he went off on a several-day binge. (“Holman does go off on sprees & may be off now,” his friend and colleague, Congressman Samuel S. “Sunset” Cox wrote a friend; “but he is honest & just above all men I ever knew here. He will stay 6 months sober; & then break. Don’t allow him to be abused or slandered.”)  The big-navy advocates knew in him an inveterate enemy, and when he found a place on the Select Committee on American Ship-Building, the Washington Post growled that Americans had “a great, unutterable yearning … to behold a ship made on the Holman plan.” No doubt many such could be made, it thought—just big enough to be hung on watch-chains “or otherwise employed as curios.” Admirers called him “the watchdog of the Treasury” and the “Treasury Cerberus,” . . .

His frugality became legendary. One story his friends loved to tell about him was how nefarious interests, realizing that their only chance lay while the congressman was absent from the floor, waited until he was being shaved in the Capitol’s barber-shop before offering their bill. In vain: Holman rushed into the chamber, his face covered with lather, to shout his objection. In 1885, he went west on an inspection tour with other members of the Committee on Indian Affairs. Unlike the rest, he refused to go by sleeping car, because it would cost the government too much, and slept in his seat instead. When they reached Fort Yates, in Dakota Territory, he balked at paying five dollars for the steamer ride to Bismarck, pointing out that the post had army ambulances and mules. “The mules are not earning anything,” he argued. “They are idle; they will convey us.” And so they did, much to the annoyance of his fellow-traveller, Congressman Joseph Cannon of Illinois, who tipped the wagon-driver to run over every single stone in the road as a punishment. As he arrived at Fort Lincoln, the commander proposed that they fire a salute. “No! no! for God’s sake, don’t!” Cannon protested. “He will object to the useless waste of powder.”

May the acts of the 115th Congress do great honor to  the memory of Congressman Holman.

Get Off Your Ass & Do Your Job

The prog Senators, led by Chuckie the Clown and Pale Face Liz, are bound and determined to try and use ever means at their disposal to slow down approval of Trump’s cabinet appointments.  And now it seems that they are being aided by bureaucratic slow walking from the Office of Government Ethics.  This from Hot Air, quoting WaPo:

A top ethics official warned Saturday that plans to confirm Donald Trump’s top Cabinet choices before background examinations are complete are unprecedented and have overwhelmed government investigators responsible for the reviews.

To put this into stark perspective, Trump announced the majority of his cabinet picks earlier in the transition process than did Obama.  And yet:

When President Obama came into office in 2008, and the GOP was in the minority, they speedily approved his Cabinet picks. Within the first day, the Senate confirmed seven of Mr. Obama’s Cabinet selections, and by the end of the week, more than a dozen of Mr. Obama’s leadership choices were approved.

Hillary Clinton was the most contentious of the nominees for secretary of state. Her nomination had to go to a roll-call vote, where she got voted in 94-2 — meaning more than 40 Republicans voted to confirm her. It happened in about one week. Eric Holder, another controversial pick, got confirmed in one week by a 75-21 vote — another majority.

Seems that the Holman rule ought to get used early in 2017.  And Chuckie and Pale Face need to get this jammed down their throats.

Milo Yiannopoulos has signed a book deal with Simon & Shuster and the prog left is in full meltdown trying to stop it by punishing the publishers.  Poor progs, they had total victory in this country within their grasp on Nov. 7, and now they find themselves having to fight without help of government to keep out all dissenting opinions:

The response to Milo Yiannopoulos getting a big-bucks book deal with Simon & Schuster has been nuts. Even by today’s standards. The cry has gone up that S&S — or SS, amirite? — is endangering the well being of women and gays and blacks and other minorities that have felt the sting of Milo’s camp polemics. Please. It’s a book, not a bomb. It’s words, sentences, ideas, not fire and pogroms. Everyone needs to calm down.

Milo is the Breitbart editor turned darling of the agitated, anti-PC right, given to manicured fuming against feminism, Islam, censorious students, ‘Black Lives Matter’ and other things that apparently threaten Western civilization. . . .

Make no mistake, the progs are in a war with everyone not in agreement with them.  They intend to take no prisoners.  We fail to respond in kind at our peril.

Ann Althouse is beside herself with excitement at the thought of Hildabeast and Trump Jr. facing off later this year in an election for Mayor of NYC:

Oh, yes! The time is ripe. Building a dynasty is not something you drag your heels on. And what if the Democratic nominee is Hillary? The Trump vs. Hillary show was a big hit last fall. I want to watch another season. Make it happen, people. It’s a slow year for election action. The spotlight is on you. Bill de Blasio richly deserves a big challenge. Come on, New York City. We political spectators need some variety. The Washington show is worth watching: President Trump, Trump’s Congress, the Democratic Party in Trumpland. But all that governing can get tiresome. A nice active NYC mayoral campaign would be great.

Trump’s war with the mainstream press and other media could not be more high profile than it already is.  That said, it is now going to start settling in to the trenches in what I guess will be a political replay of WWI style warfare.  What is amazing to see is journalists outed by Wikileaks for violating journalistic ethics none the less still being employed to cover Trump as if they have even a scintilla of objectivity:

John Harwood, who is with CNBC and writes for the New York Times, he is trading emails with Podesta and strategizing. He’s warning him about how Ben Carson could be trouble in a general, and they’re just spitballing. They’re on the same team and it is quite clear that they have common goals…

I was talking to somebody about this earlier: It is almost like the Soviet Union, but worse. At least in the Soviet Union, there was a penalty for not collaborating with the state. These guys do it quite voluntarily. They do it because they are on the team.  Harwood is far from alone . . .

I am sure Trump and his communications staff will remind us of this endlessly — as well they should.

I’ll call this a good sign, even if it is pulling up the drawbridge far too late, in Germany and perhaps everywhere else:

The Salafist movement in Germany nearly doubled from 3,800 members in 2011 to 7,500 in 2015, according to government estimates. After a series of terror attacks in 2016, Gabriel says he has “zero tolerance” for Islamism.

“Salafist mosques must be banned, communities dissolved, and the preachers should be expelled as soon as possible,” Gabriel, who is the leader of the Social Democrats, said in a Friday interview with magazine Der Spiegel. “Those who encourage for violence do not enjoy the protection of religious freedom.”

Wahhabi Salafi Islam is the well-spring of terrorism in the Sunni world, so I agree with this act.  But Mr. Gabriel needs to sell this, as on one hand, probably the vast majority of his countrymen have no idea just how toxic and dangerous this Saudi brand of Islam truly is, and on the other, they will be fought every step of the way by the progressive left who live in a suicidal fantasy world where all of Islam is unicorns and rainbows. 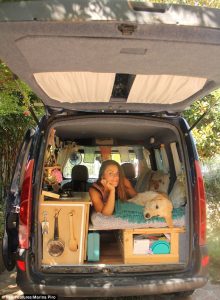 A 25 year old woman quit her job, transformed her van into a sort of efficiency apartment, and has spent the last year travelling about Europe with her best friend, her labradoodle.

Italian-born Marina Piro, 25, and Labradoodle Odie now live in a five door 2001 Renault Kangoo which she turned into a miniature home by herself for £500, installing a bed, curtains, kitchenette and lights. . . .

In the past 11 months they have  visited lakes in France,  been hiking and biking in Italy and enjoyed the seaside in Brighton and Marina plans to continue travelling for the foreseeable future.