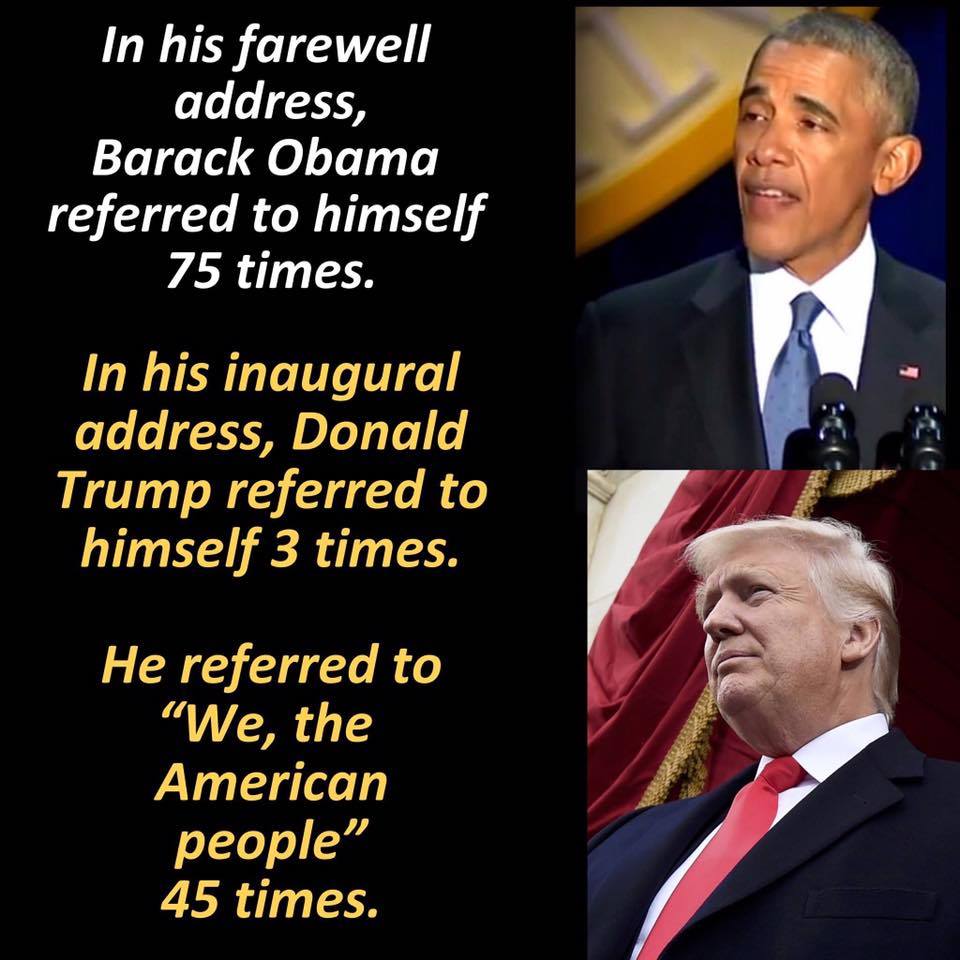 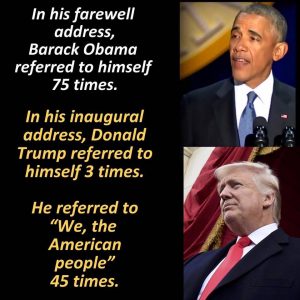 I don’t know about you, but I thought Donald Trump’s inauguration speech was excellent. It was short, direct, and outwardly focused. By “outwardly focused” I mean that President Trump, unlike President Obama, did not anoint himself as a godhead through endless self-references. Instead, Trump made the American people the stars of his speech. For example,

That all changes – starting right here, and right now, because this moment is your moment: it belongs to you.

It belongs to everyone gathered here today and everyone watching all across America.

And this, the United States of America, is your country.

January 20th 2017, will be remembered as the day the people became the rulers of this nation again.

The forgotten men and women of our country will be forgotten no longer.

Everyone is listening to you now.

You came by the tens of millions to become part of a historic movement the likes of which the world has never seen before.

At the center of this movement is a crucial conviction: that a nation exists to serve its citizens.

Trump’s focus on the American people (“you”), rather than himself, is in marked contrast to Obama’s speeches, which invariably are all about . . . Obama. The words “we” or “I” dot his rhetorical landscape and his image is the focal point for every event the White House commemorates. Just think of these gems from his Twitter feed:

(Townhall has compiled a list of other self-referential Obama commemorations.)

Now that I’ve made my point about Trump’s focus on the people and Obama’s focus on himself, I have to make good on my promise that Trump’s speech is marvelously consistent with Judeo-Christian tradition. I can do that.

As regular readers know, I spent the last few weeks traveling through Southeast Asia, in countries that are primarily Buddhist, although their Buddhist traditions are intertwined with Hinduism. I visited countless temples in Laos, Cambodia, and Thailand. Some, as in Thailand, were stunningly beautiful; others, as in Cambodia, were haunting; and all were shrines to a deep and abiding faith. All of them were also rich in iconography about various gods, demons, and magical creatures, not to mention the various incarnations of Buddha. The following are just a few of my photos. 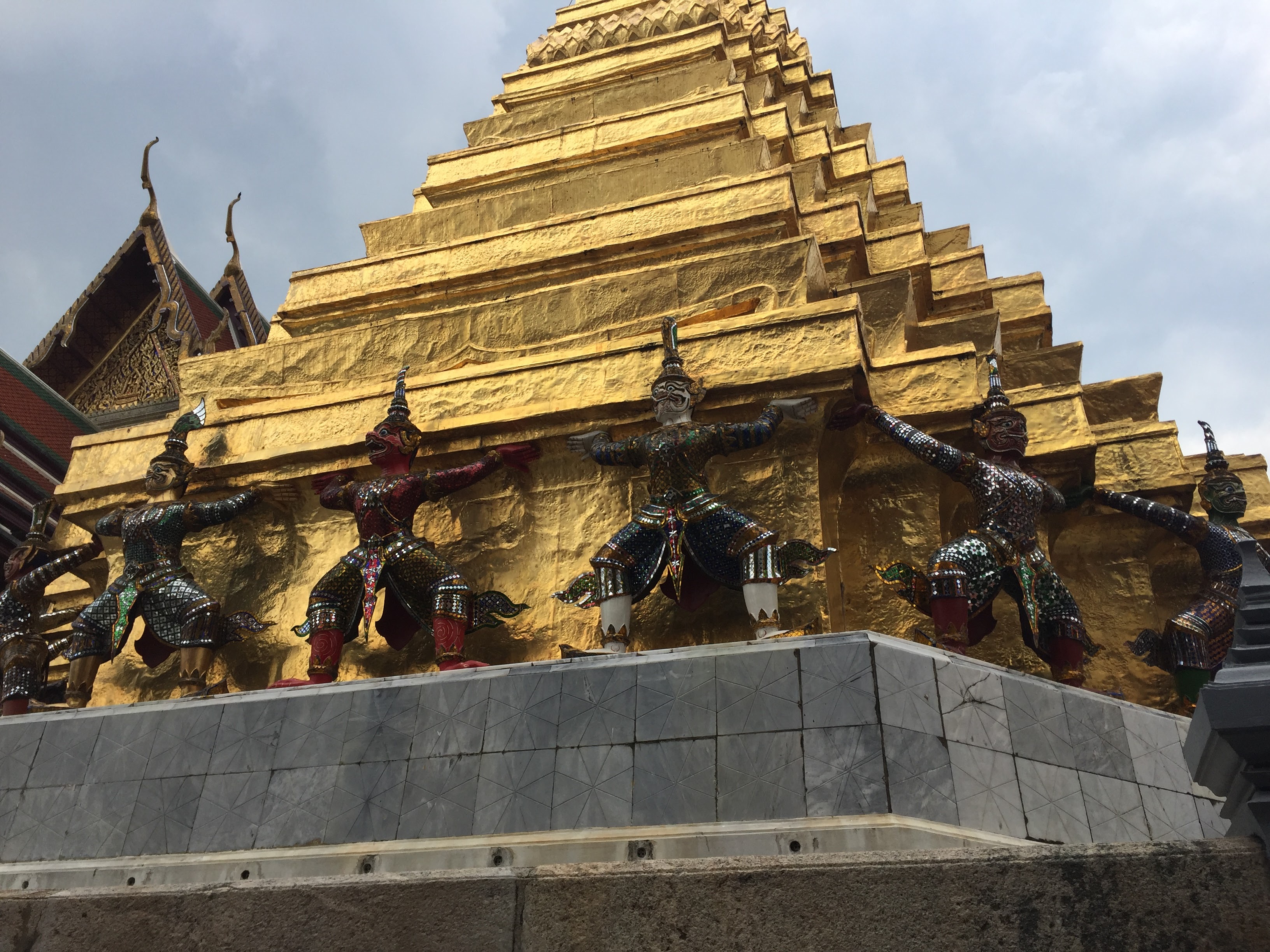 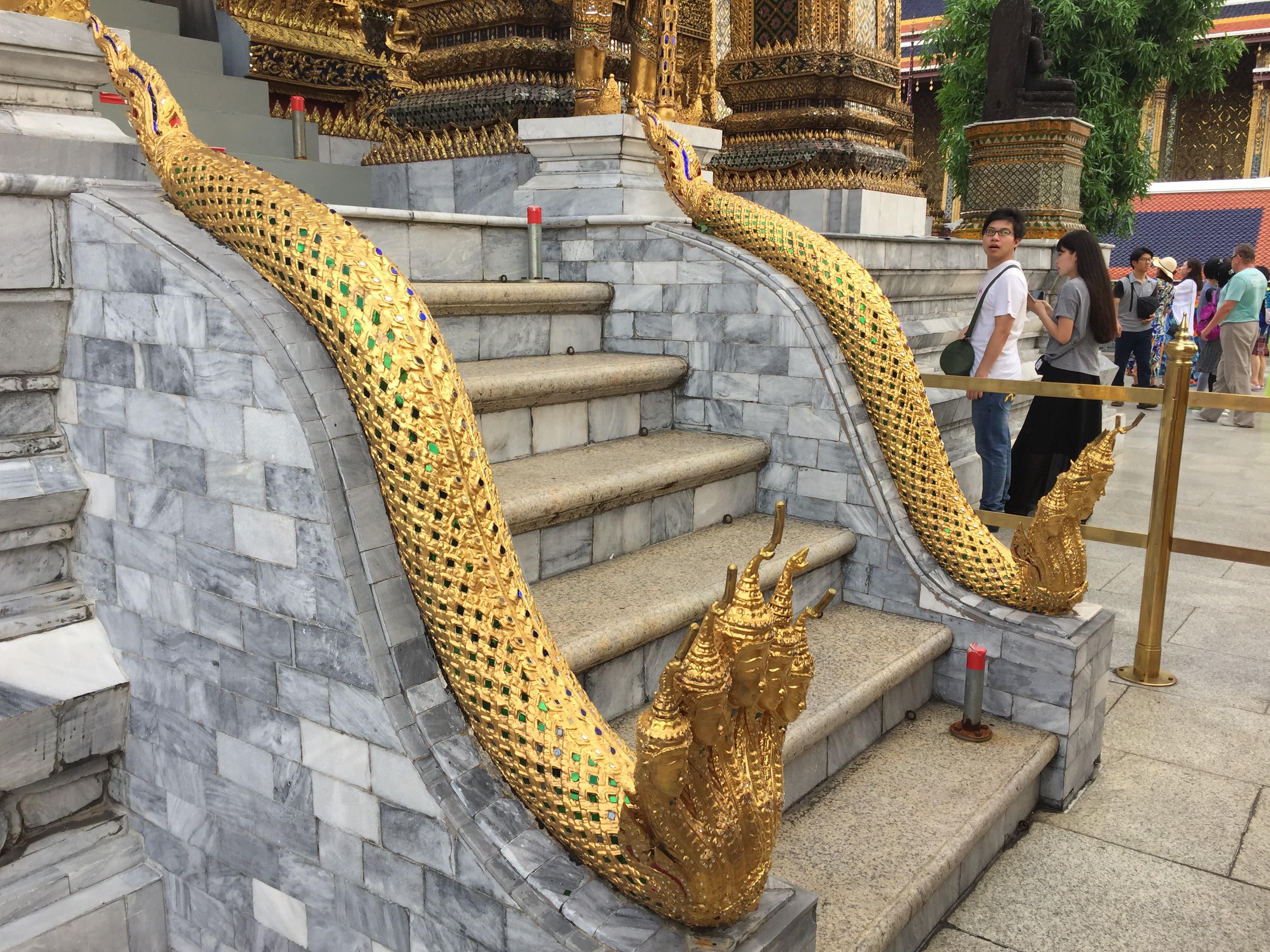 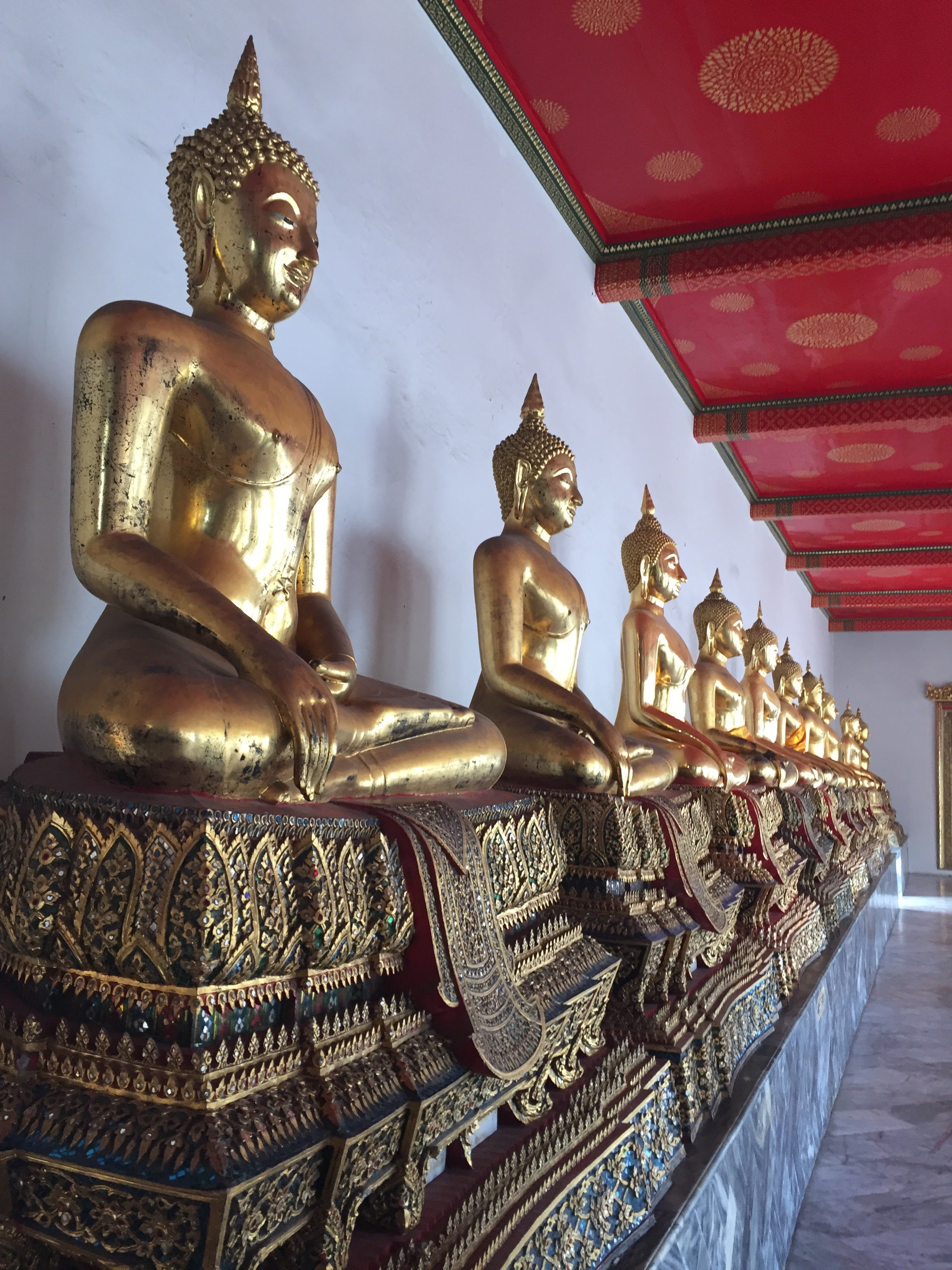 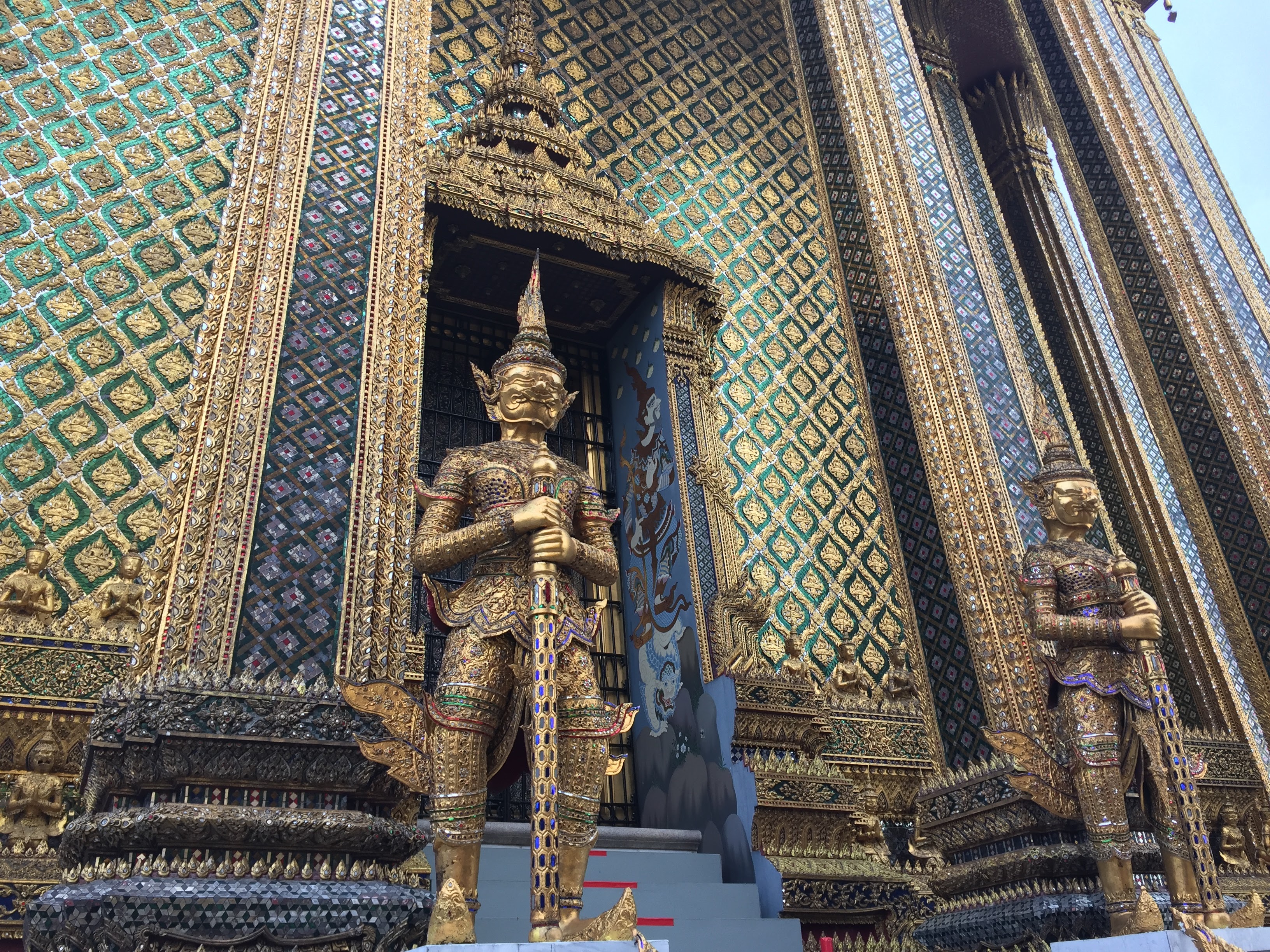 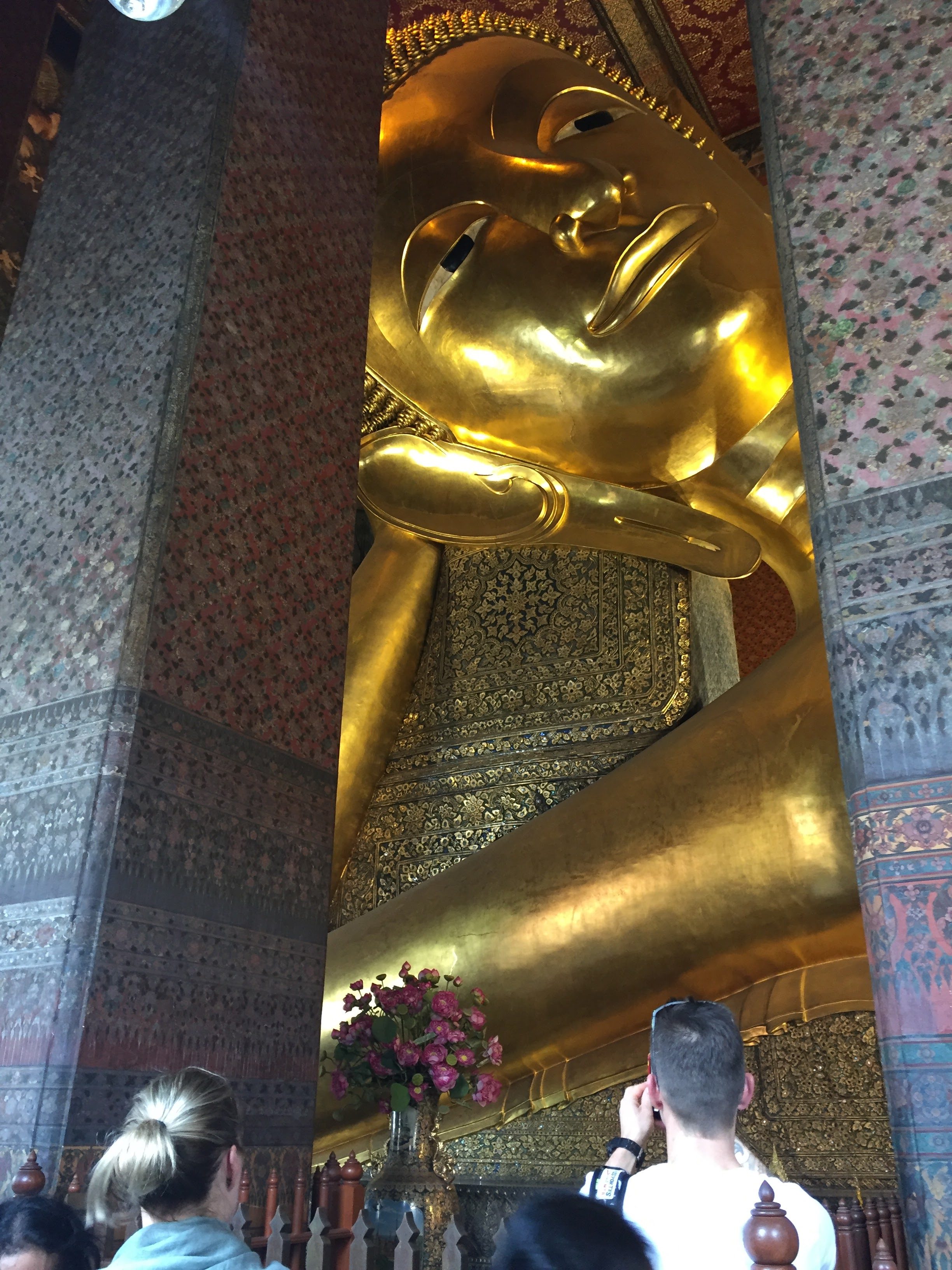 From Cambodia (which is unusually rich in Hindu and Buddhist iconography thanks to Angor Wat and the myriad other temple complexes arrayed around Siem Reap): 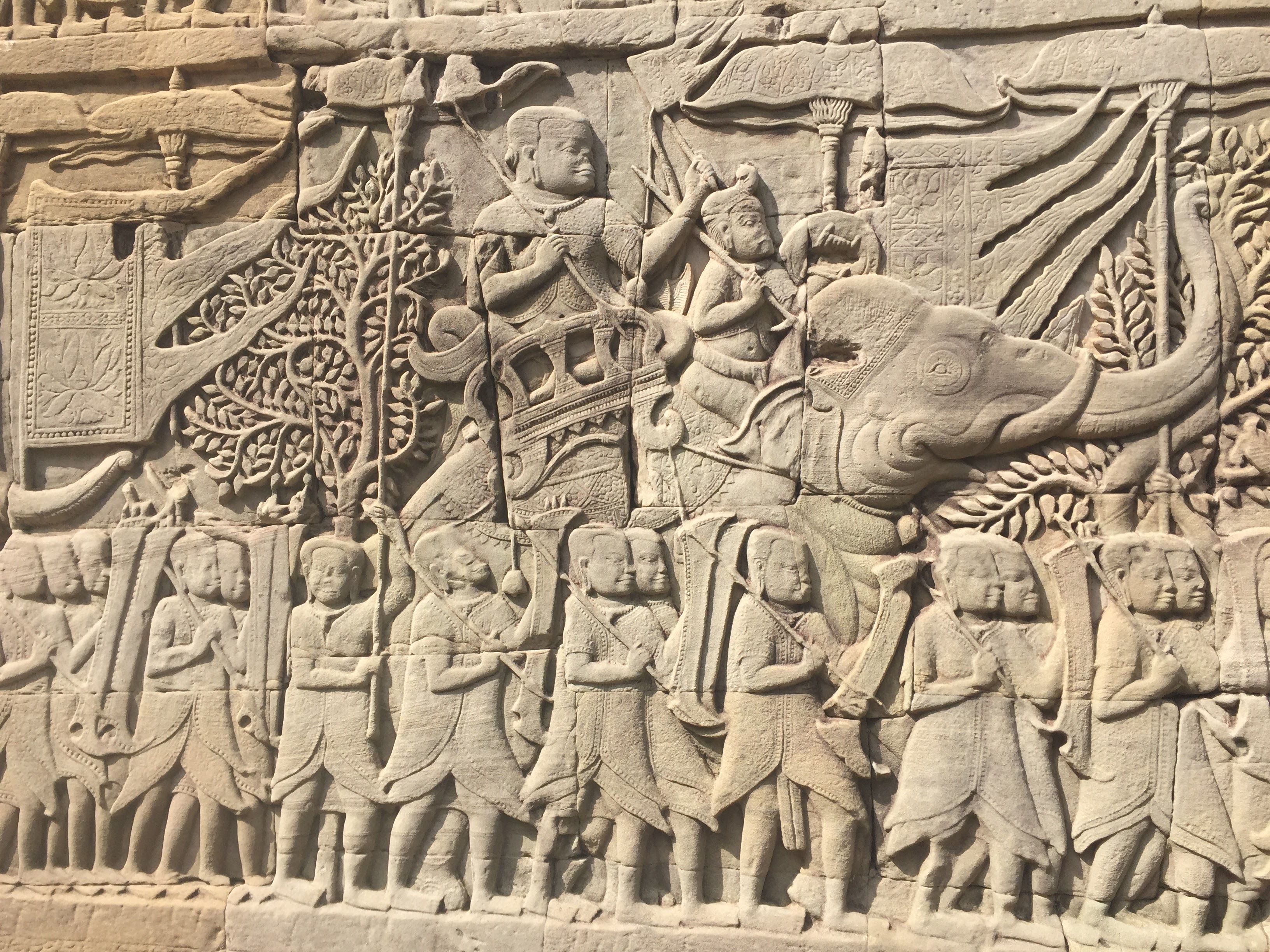 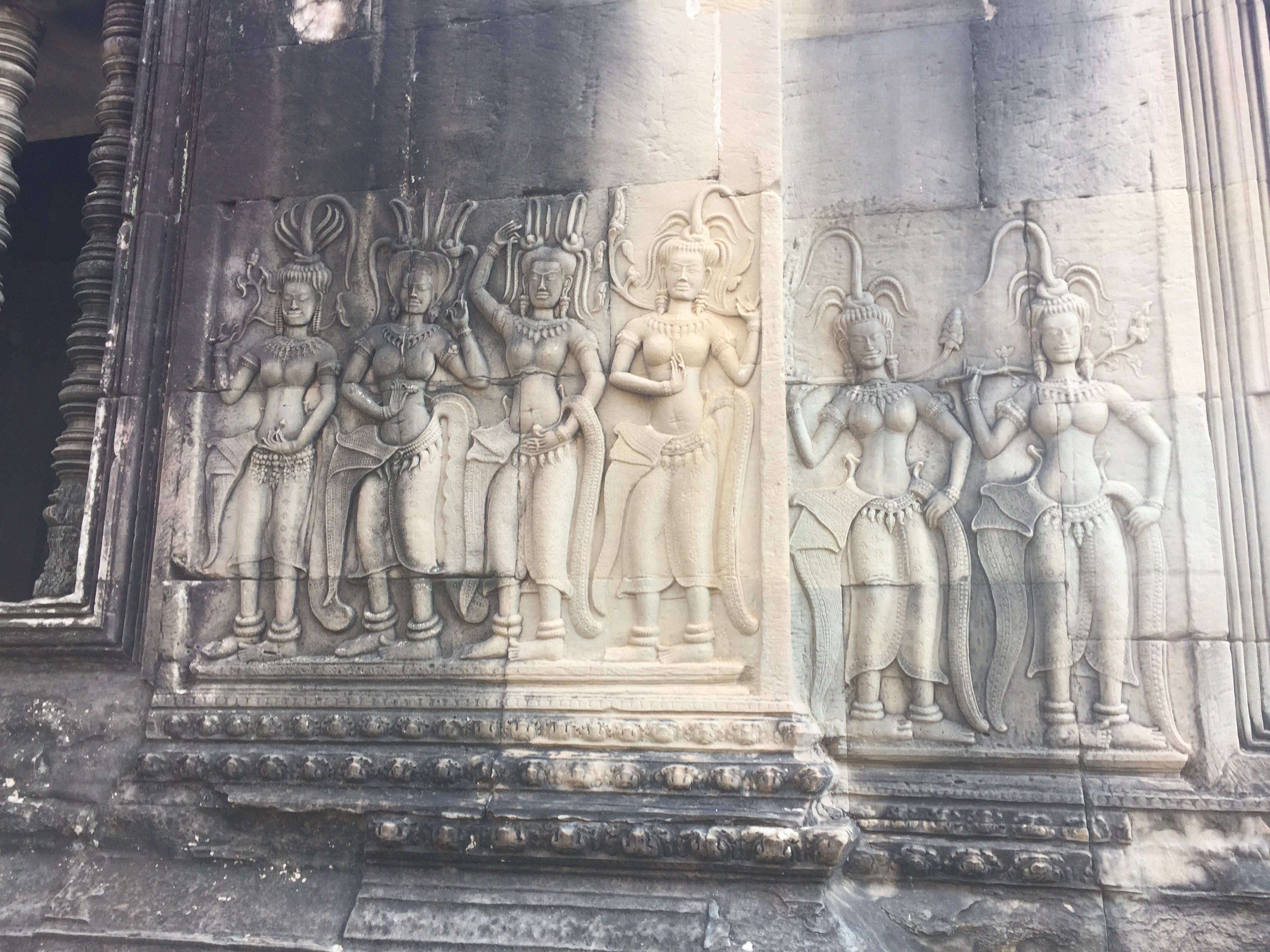 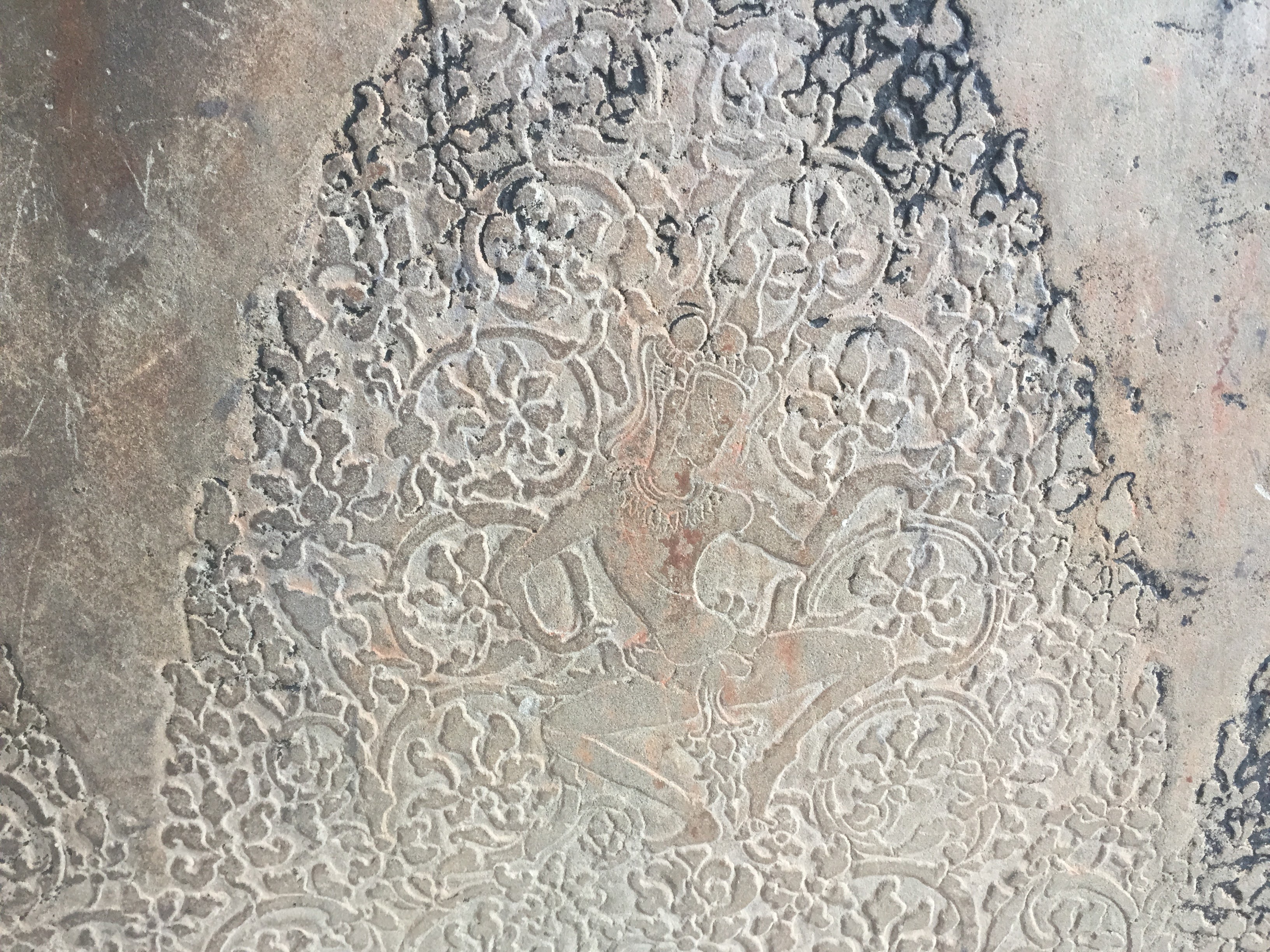 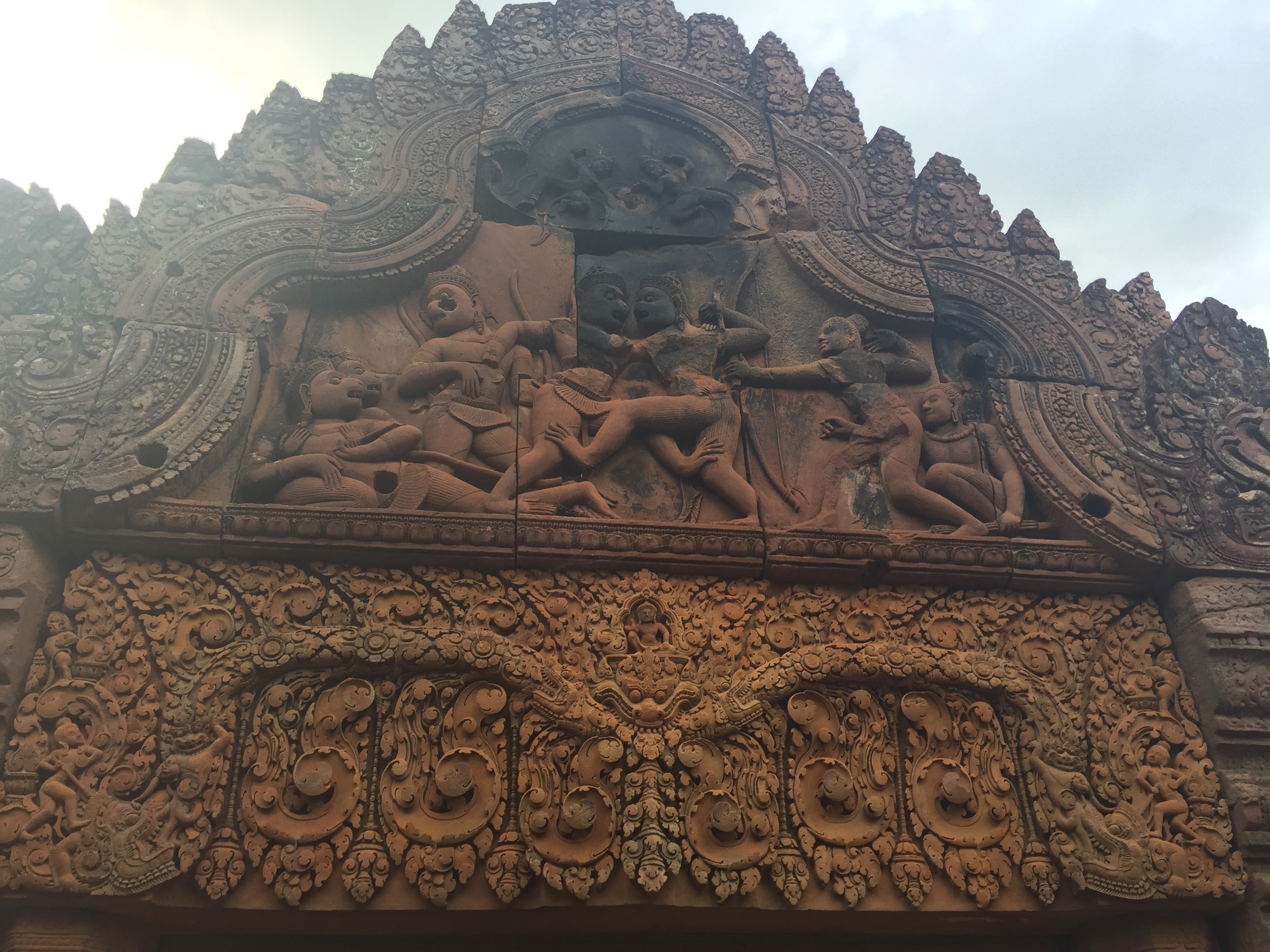 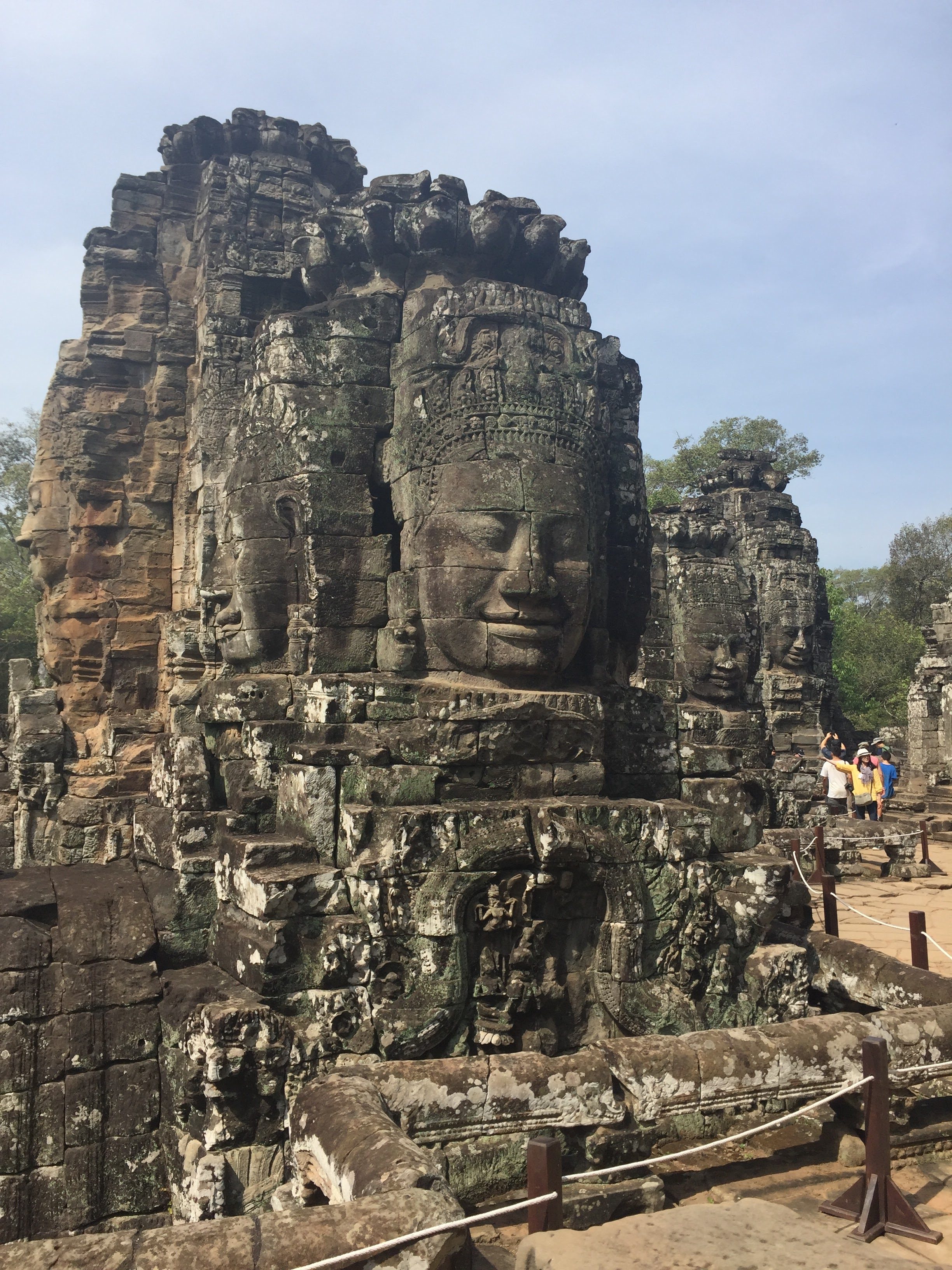 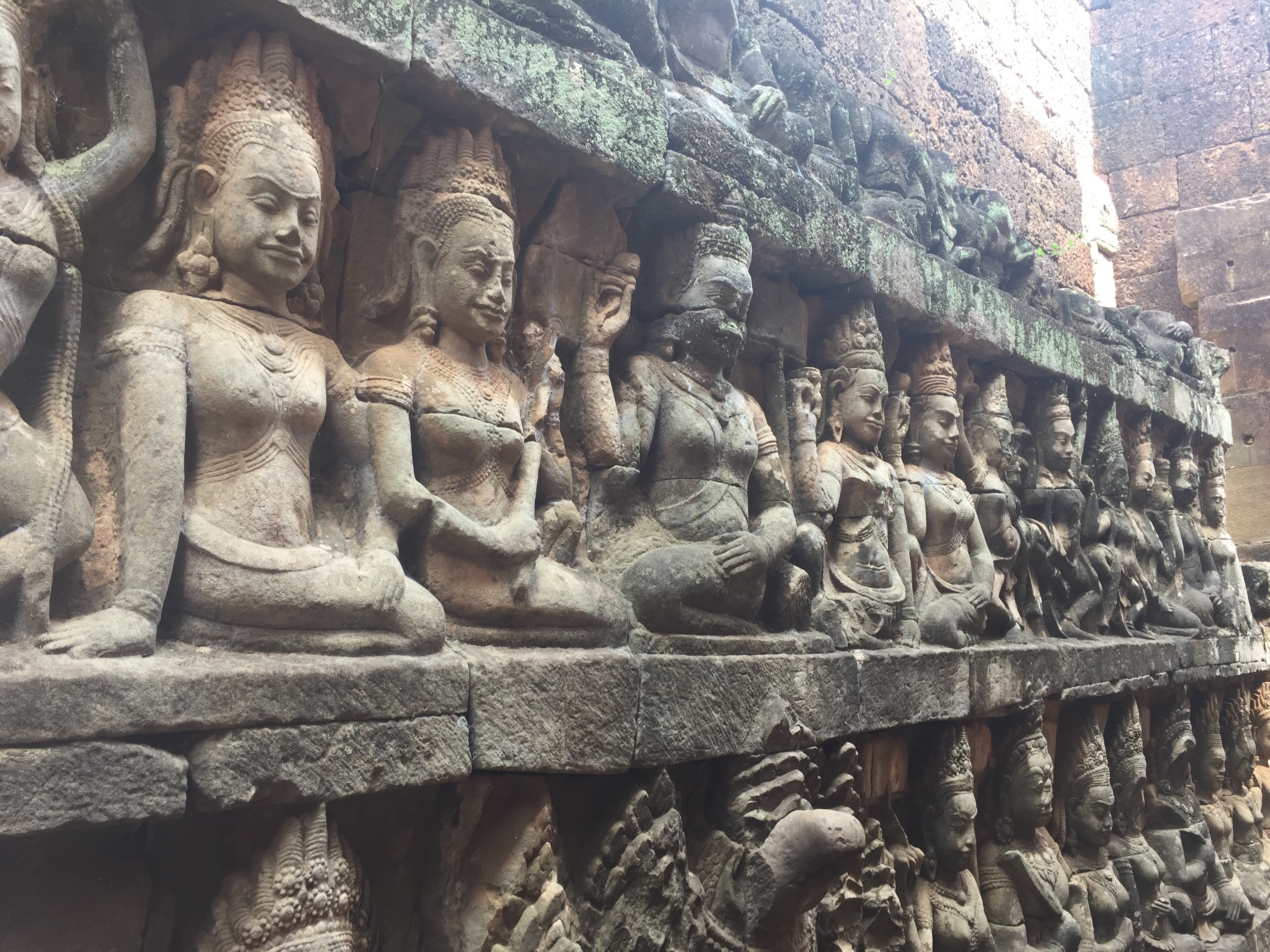 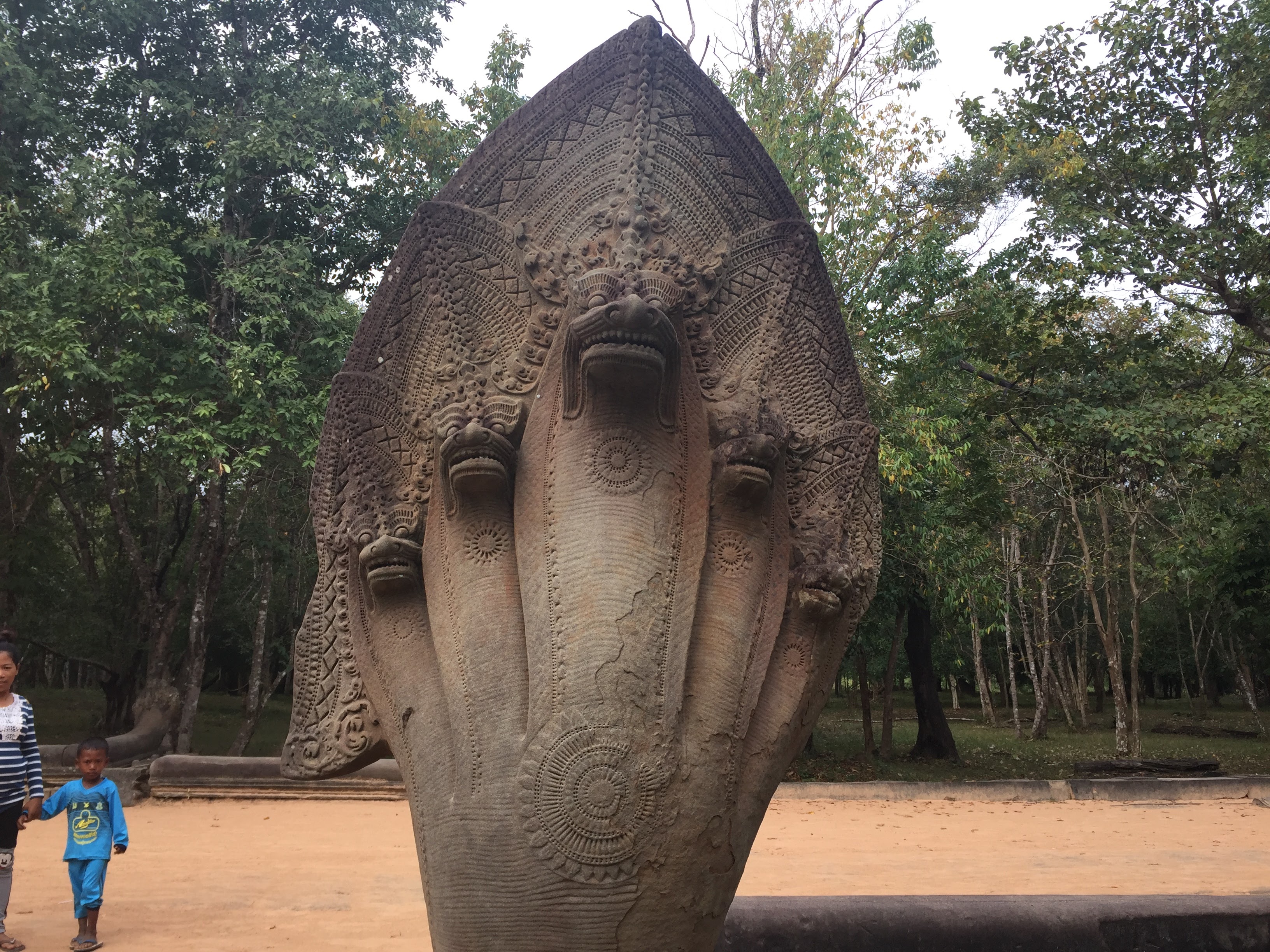 And from Laos, a devoutly Buddhist country: 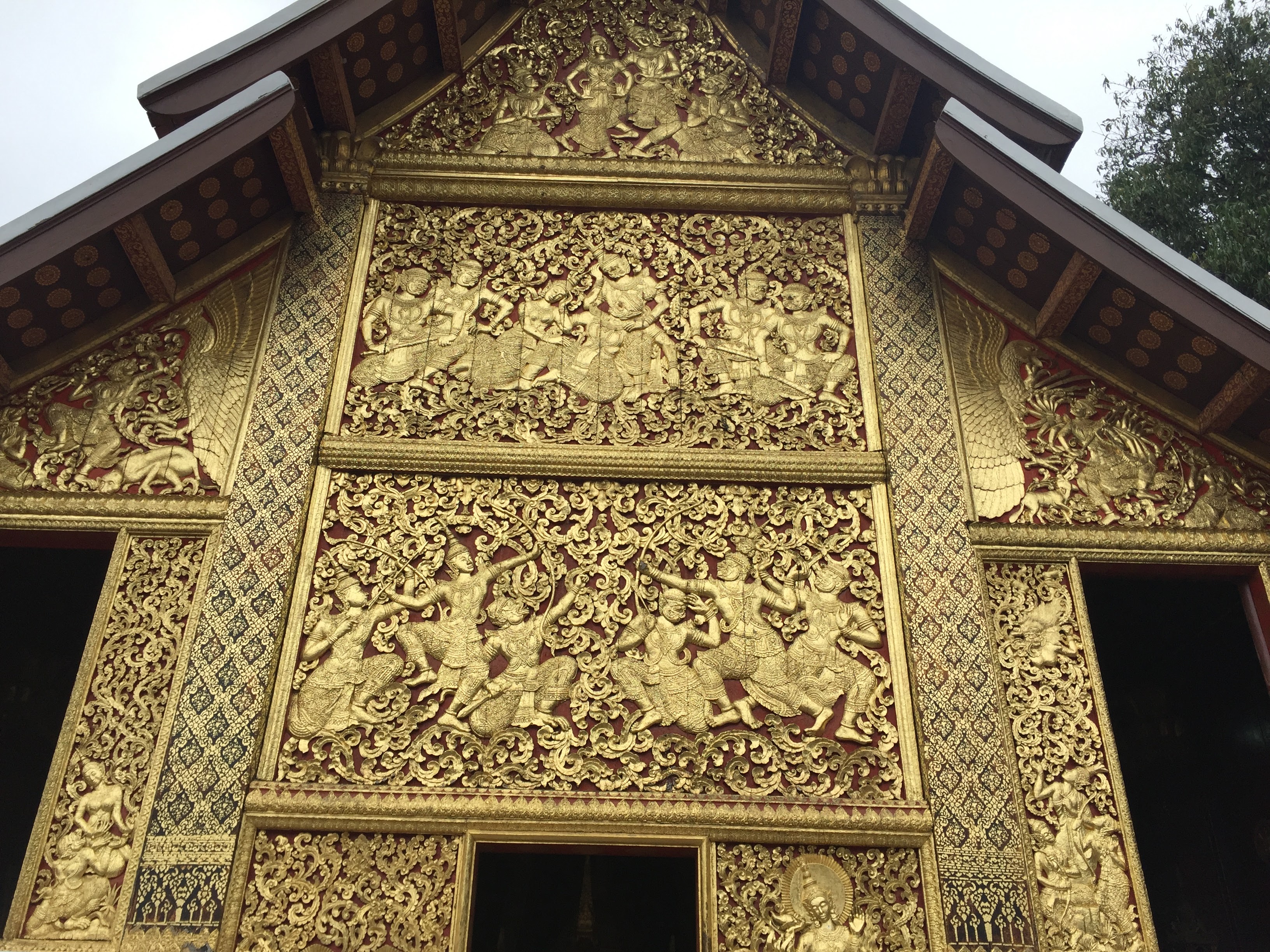 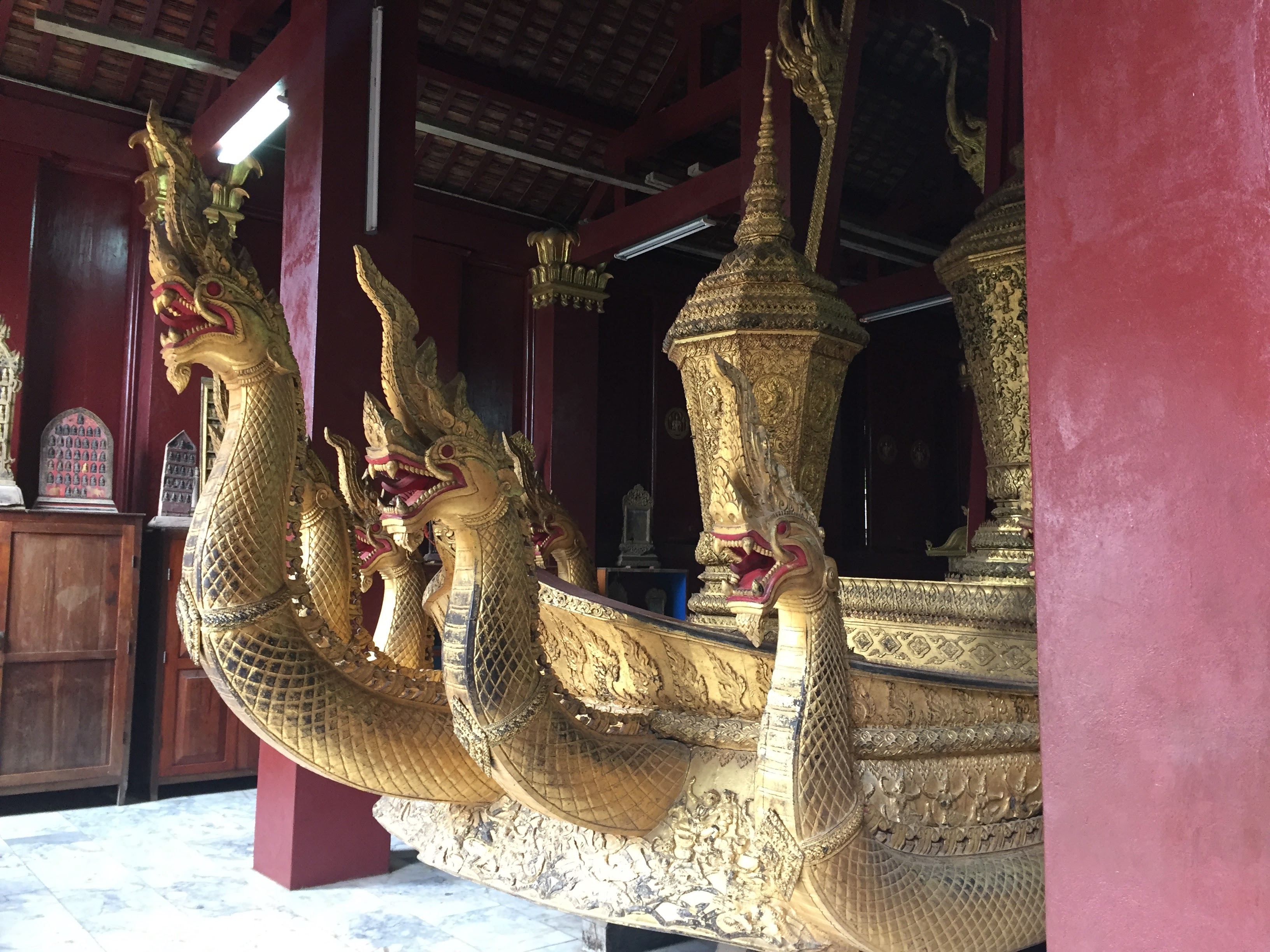 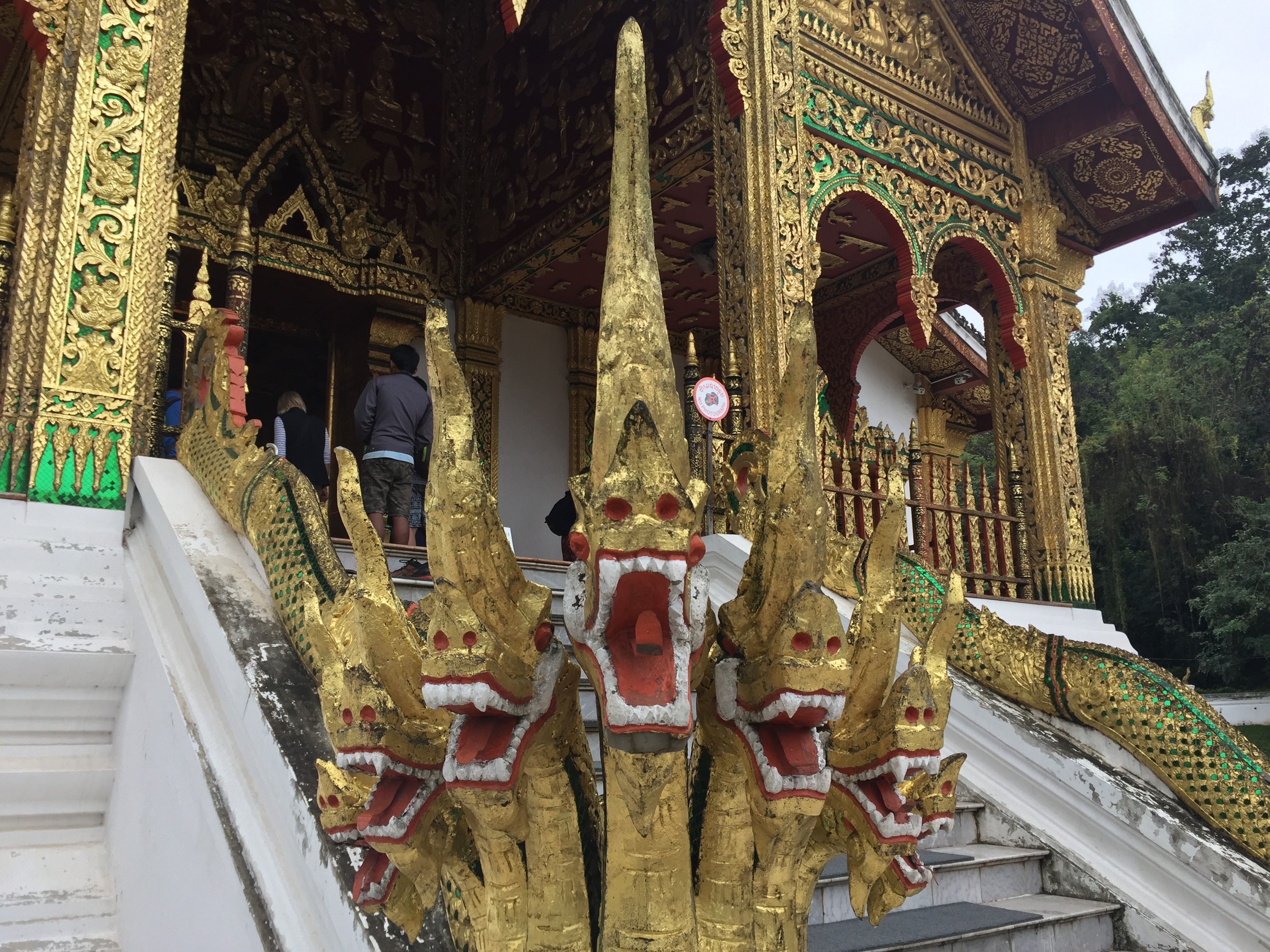 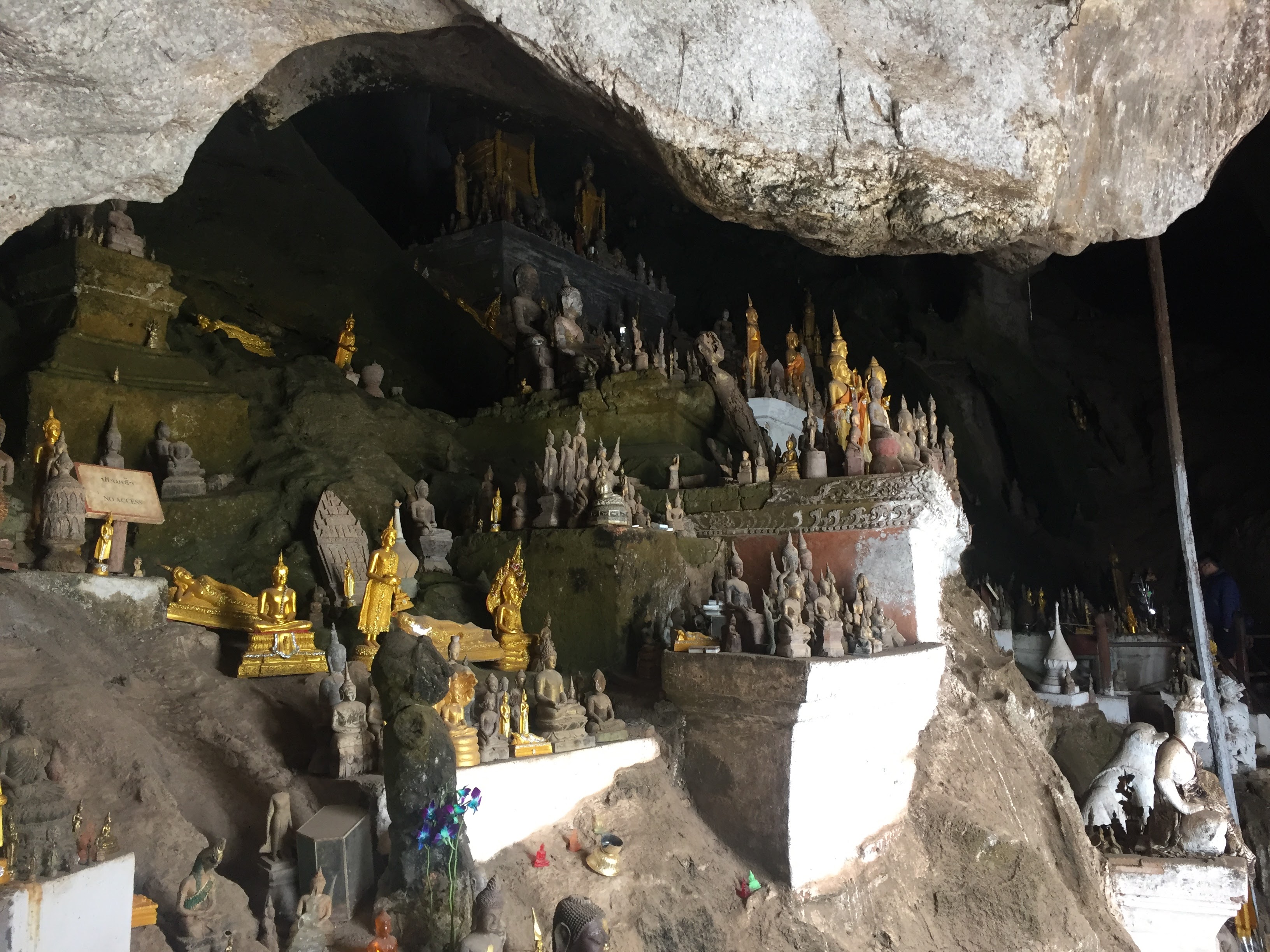 The common denominator in all of the above iconography is that humans are conspicuously absent. Buddhism and Hinduism are the stories of gods, not men. Likewise, Islam is the story of a single man, not of many men. And of course, the entire panoply of Greek and Roman gods lived in a richly three-dimensional world that only periodically introduced humans as pawns for the gods, whether to destroy them outright, to rape them, or to visit other random benefits or horrors upon them. Confucianism is not so much a religious belief system, since no one calls Confucius a deity, as it is a remarkably intelligent rule-based approach to life.

Correct me if I’m wrong, but the only deity-centered religious tradition that does not fall into a god-based narrative is the Judeo-Christian tradition. The Old Testament, because its God is abstract and invisible God, and gives man free agency, even as he imposes rules and morality, is a narrative that inevitably focus on humankind, not on God.

Sure, Michelangelo painted God for the Sistine Chapel, but the reality is that the stories that stick are the ones about people: Adam & Eve, Cain & Abel, Moses, David, Solomon, Jezebel — they are all fully realized human beings. None were perfect (with some being more imperfect than others). Other than the pagans who are rather one-dimensional, all of them were very human indeed, trying to please God, but periodically falling prey to un-godly impulses. No wonder artists have, for centuries, portrayed these characters in paintings and sculptures. 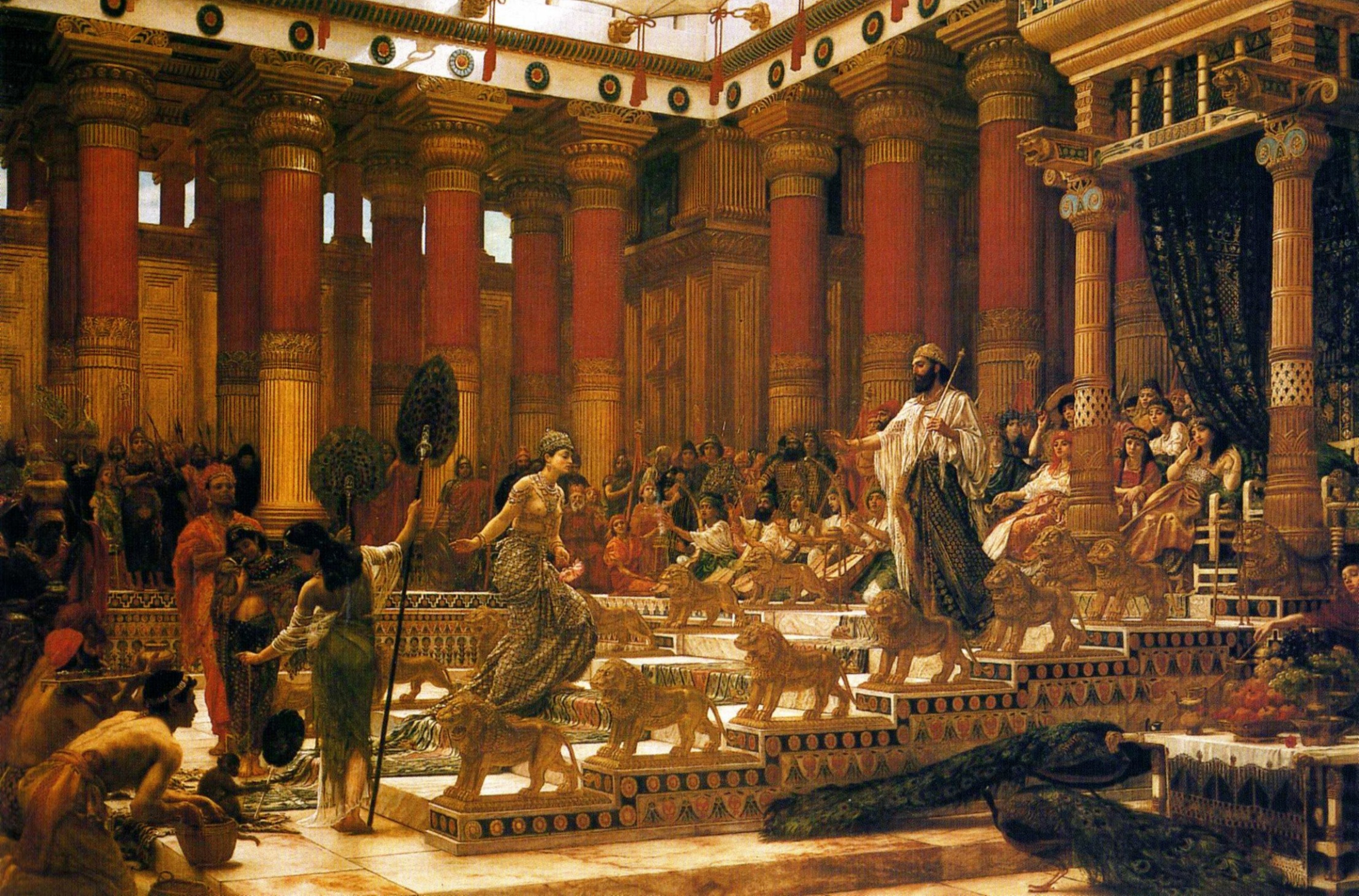 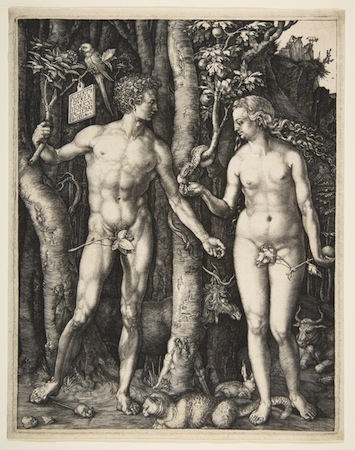 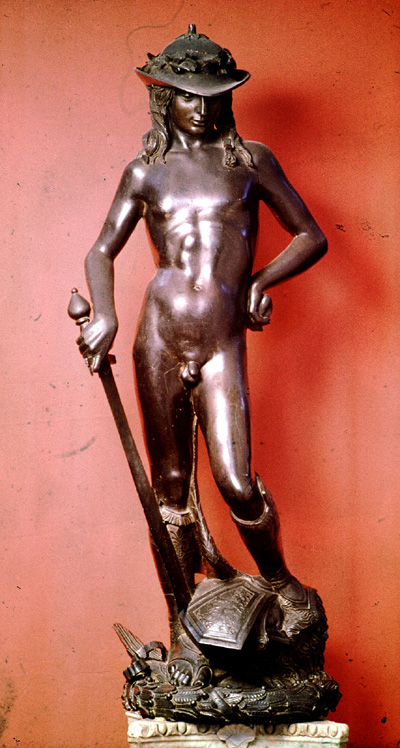 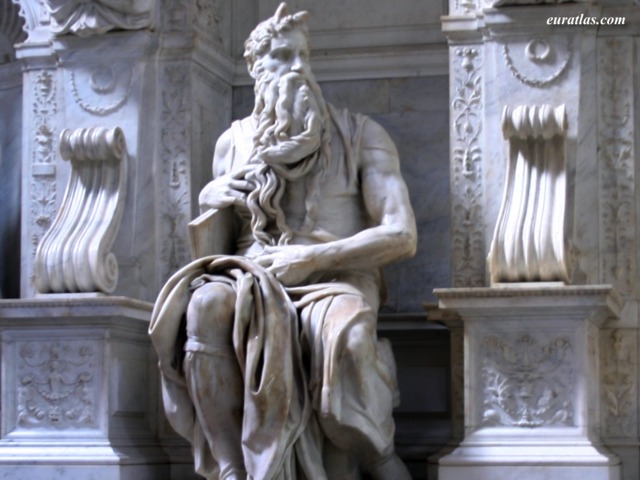 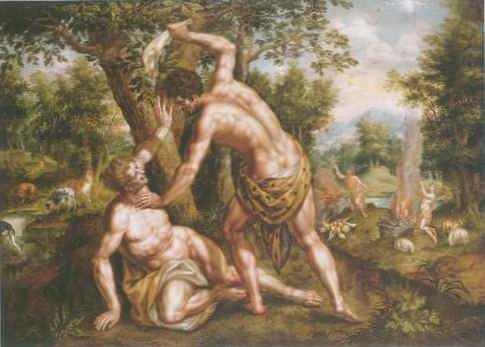 The New Testament is God-centered, of course, in that it is Jesus’s life story. However, up until his crucifixion and resurrection, Jesus is a man. Moreover, his followers, who are as richly delineated as any Old Testament characters, are very human indeed. Christ, unlike pagan Gods, has a fellowship with humankind. Men are not his playthings; instead, they are an aspect of “god in man.” He teaches and ministers to them, rather than toys with them. And the Pauline letters, of course, are entirely human-centered insofar as Paul preaches the Christian life.

Obama, however, has always had a God complex, and his followers have willingly gone along. The magic negro; the Black Jesus; the man from whom rainbows spring; the haloed, hallowed deity in the White House: 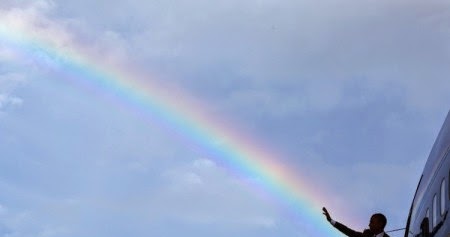 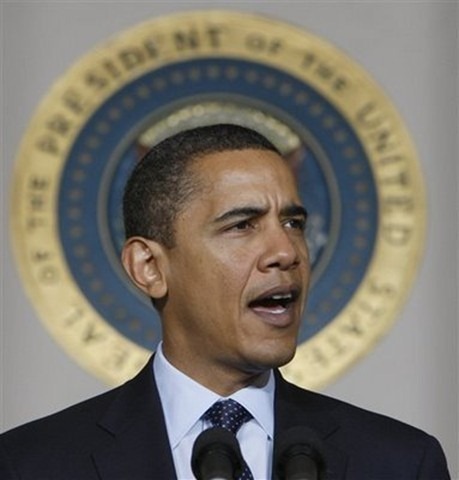 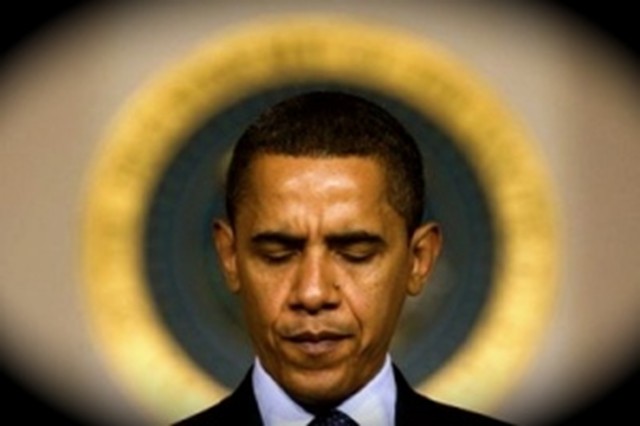 (I bet we won’t see the media framing any pictures in those ways when it comes to Trump.)

The Left has happily worshiped at Obama’s altar, complete with demons (white men, conservatives, conservatives minorities who wandered off the plantation, etc.) and angels (the LGBT crowd, women en masse, docile minorities, BLM, etc.). No wonder that his departure leaves them so shattered. It’s as if Zeus were to announce to Romans his coming retreat from Mt. Olympus. There is no place in this Obama-centered faith for actual people, the ones who refuse labels, who work hard, who believe in America and its values — most especially a belief that we are all created in God’s image and come equipped with certain inalienable rights.

Trump won in  significant part because he is the un-Obama. From the start, he has been a politician who, rather than playing at being a god or demi-god, gave voice to the people. While I’m not normally a Peggy Noonan fan (she’s too gauzy and sentimental a writer for me, plus she was initially bamboozled by Obama’s mini-deification), she’s on to something here (bolded emphasis mine):

The inaugural address was utterly and uncompromisingly Trumpian. The man who ran is the man who’ll reign. It was plain, unfancy and blunt to the point of blistering. A little humility would have gone a long way, but that’s not the path he took. Nor did he attempt to reassure. It was pow, right in the face. Most important, he did not in any way align himself with the proud Democrats and Republicans arrayed around him. He looked out at the crowd and said he was allied with them.

Normally a new president has someone backing him up, someone publicly behind him. Mr. Obama had the mainstream media—the big broadcast networks, big newspapers, activists and intellectuals, pundits and columnists of the left—the whole shebang. He had a unified, passionate party. Mr. Trump in comparison has almost nothing. The mainstream legacy media oppose him, even hate him, and will not let up. The columnists, thinkers and magazines of the right were mostly NeverTrump; some came reluctantly to support him. His party is split or splitting. The new president has gradations of sympathy, respect or support from exactly one cable news channel, and some websites.

He really has no one but those who voted for him.

Put another way, Trump is a man, not a God. Thankfully, his supporters do not worship him. Instead, they recognize that he is, and knows he is, a man among men — decidedly imperfect, but striving, and determined to serve his fellow man. What a refreshing change from the President who would be God. And what a perfect form of leadership for a nation that, at the end of the day, still functions within the Judeo-Christian tradition.