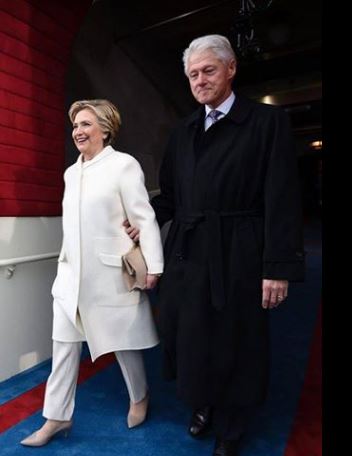 An extreme bit of Hillary adulation showed up on my Facebook feed today:

In case the “see more” button on the post doesn’t work, this is what Andrew Mayzak had to say:

Can we talk about this for a minute?

This is a Yale-educated law professor, First Lady, Senator, and Secretary of State who:

-Endured 25 years of smear campaigns
-Lost the Electoral College by 80,000 votes
-Won the popular vote by 3 million votes
-Attended her opponent’s inauguration
-Received no handshake from Trump
-Was booed by the crowd when she appeared

And goddammit… LOOK at her. Polished and confident, wearing white for the Suffragettes, her husband taking *her* arm instead of the other way around.

This is the godmother of New America, a rational, pragmatic, imperfect human being who was born 50 years too early for her gender to be a non-issue in an election.

While she missed the presidency, she arrived just in time to show us all, in unflinching terms, the deep undercurrent of sexist double standards in our society.

And in doing so, she taught generations of girls and women that yes, you DO matter and yes, you CAN do anything.

From my viewpoint, that Hillary adulation is appalling, not just because it’s slobbering sycophancy that should embarrass anyone over the age of seven, but because so much of it is untrue. Underlying all the untruths is a disturbing refusal to recognize that even that best person occasionally has feet of clay. For example, even those of us who support Trump acknowledge his foibles. I’m putting my faith in his presidency being the necessary corrective to the last 8 years and, indeed, the last 25 years, but I’d be a fool if I didn’t acknowledge that he’s vulgar, self-absorbed, and manipulative. As for his relationship to the truth, I see him guilty mostly of puffery (i.e., exaggeration) than out-and-out dishonesty — which is not virtuous, but it’s not a cardinal sin.

The above paean to Hillary, though, refuses to acknowledge any flaws in the Left’s idol. The claim that she endured 25 years of smear campaigns means pretending that Hillary never endangered national security; never lied repeatedly and on camera about just about everything; never hid files from federal investigators; never engaged in pay for play at the State Department; never abandoned Americans to die on foreign land; never lied about those American deaths after the fact; and never repeatedly defended a credibly accused rapist, assaulter, and workplace harasser, a defense that included demeaning and bullying his accusers.

There is no “yes but” defense here — as in, “yes, she lied about Benghazi but it was necessary because….” To the Left’s true believers, none of it ever happened.

Then there’s the popular vote versus electoral college argument, which ignores more than two hundred years of American history. Not only does the Left fail to understand that the rest of the nation doesn’t want to be ruled by California (especially since it’s reasonable to assume that a significant percentage of California votes came from illegals), it also represents a failure to understand that both parties campaigned within the confines of the Electoral College system . . . and that Trump campaigned better. It’s reasonable to believe that, if the system had been a straight majority vote across America, Trump would have campaigned differently and more conservatives would have turned out to vote, especially in those true Blue states in which voting usually isn’t worth a conservative’s effort even to fill out a ballot.

To the Left, Hillary is a heroine for attending her opponents’ inauguration. I hate to break it to the Left, but in a true democracy, with two parties and a history of peaceful transitions, the loser, unless ill, shows up. It was only an issue this year because it appeared for a time that Hillary would break with tradition and be a sore loser, rather than a gracious one.

That handshake? The author is probably correct that there was no handshake. There was only this:

Perhaps that trumps a handshake (pardon the pun) . . . or maybe not in a post-truth America.

The only charge that has a smidgen of honesty about it is the claim that some in the gathered the crowd booed Hillary. On the one hand, that was rude. On the other hand, it’s not an entirely inappropriate response from patriots when they’re in the same space as a woman who sold out America’s interests for her personal financial benefit and power aggregation, and who willingly left Americans to die at the hands of an Islamist mob, and then lied about it, because doing otherwise would damage her parties’ election prospects. Cold-hearted sleaze like that is hard to ignore.

The reality is that the Left clings to a completely fact-free version of their much-vaunted commitment to “Truth.” It’s more than a little scary to realize that approximately half the nation has committed itself to a post-truth society. Truthiness and “fake but accurate (by Leftist standards)” have trickled down from hardcore activists to all of the everyday useful idiots. This little bit of Hillary adulation, which is making its way across social media perfectly proves my point.