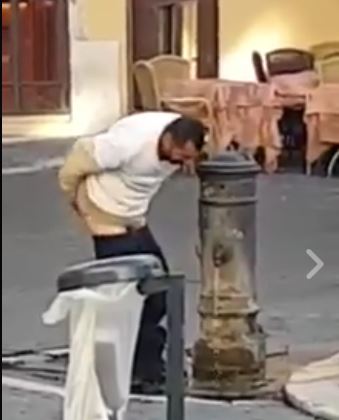 A video that has been making the rounds for a couple of months before I saw it offers so much insight Muslim hygiene that it may well put you off eating Middle Eastern food forever. And yes, I have no doubt that the man in the video is a Muslim. Indeed, I so want to make sure you’re as convinced as I am about his religious persuasion that I’m going to make you wait before you watch the video. First, I’ll tell you a few things about Muslim hygiene that you may not know.

Thing One: In just the past two years, two stomach-churning stories emerged about kitchens in Middle Eastern restaurants in England that were covered in fecal matter. In Swindon,

A CURRY chef who stored an empty milk bottle he used for washing his backside in the kitchen has been banned from running a restaurant.

And when she quizzed him about the container, which had brown finger marks on the outside of it, he said he didn’t use toilet paper ‘for cultural reasons’.

“Most shocking, Mrs Clinton found in the kitchen under the double sink and empty plastic milk bottle that was extremely dirty and covered in brown fingerprints,” he said.

“He filled it with water from the kitchen sink and used it to wash his bottom after toileting.

“So a bottle used for his cleaning his bottom found inside the kitchen where food is prepared.”

Mr Burns sad “It was a plastic milk bottle from Tesco, a two pint receptacle for milk.”

He added “The officer felt, quite frankly, sick at having the handle that.”

That story is bad enough, but it wasn’t the first of its kind. The same thing happened the previous year up in Nottingham, with fewer gross details, but more serious health consequences:

The owners of a kebab shop which sold food contaminated with human faeces have been ordered to pay compensation to customers who became ill.

A rare strain of E. coli – only the second outbreak of its kind in Europe – was found at The Khyber Pass in Nottingham in June 2014.

More than 140 people were affected by the outbreak.

An investigation by Nottingham City Council led to the discovery that the food poisoning organism responsible was Enteroinvasive E. coli (EIEC).

EIEC is only found in the human gut and so inspectors concluded people affected by the outbreak must have eaten food contaminated with human faeces.

Officials said the outbreak was traced to the restaurant after analysis of faecal specimens from patients.

The same strain of EIEC was found in lettuce prepared by food workers at the takeaway.

Paul Dales, from Nottingham City Council’s food, health and safety team, said: “This was a significant and serious food poisoning outbreak affecting a large number of people, some of whom developed severe symptoms.

“It’s fortunate there were no fatalities, as this is a strain of E. coli rarely found in the developed world, this being only the second confirmed outbreak in Europe.”

“It’s clear that hand-washing practices by some workers were wholly inadequate and this led to food becoming contaminated,” he added.

Thing Two: The non-Western approach to hygiene and fecal matters has nothing to do with country of national origin, stupidity, or disgusting fetishes. Mahbub Chowdhury, the man in the first story, may have mumbled something about “cultural reasons,” but Robert Spencer accurately identifies what’s going on . . . and it’s not cultural, it’s religious:

Cultural reasons? More like religious reasons. Islamic reasons (Istinja is cleaning oneself after urinating and defecating):

A hadith has this exchange:

Abdur-Rahman bin Yazid said: “They said to Salman, ‘Your Prophet taught you about everything, even defecating?’ So Salman said, ‘Yes. He prohibited us from facing the Qiblah when defecating and urinating, performing Istinja with the right hand, using less than three stones for Istinja, and using dung or bones for Istinja.’” — Jami` at-Tirmidhi 16

So one must use at least three stones. And regarding water:

So using water for this is praiseworthy. Stones and water. Muhammad didn’t mention toilet paper.

Incidentally, traditional post-defecation Muslim hygiene is why the sharia punishment of having ones hand cut off (usually done for theft) is such an appalling punishment — and it’s not, as Westerners might think that someone had his frigging hand sliced off and the resulting stub cauterized, all while he (or she) was fulling conscience. In the traditional Middle Eastern Muslim community, the real issue is that the hand sliced off — the left hand — is the hand the thief used for toilet ablutions. This was okay because, again by tradition, in a society without flatware, people used their right hand (not their dirty left hand) for eating.

If the thief has only one hand, and must use that hand for both ass wiping and eating, the thief is a social pariah. In other words, the missing hand makes him an outlaw, because no civilized people can be around him.

As cultures disperse throughout the world, some things may get lost. For example, people might remember that they need to use only a hand and water (not toilet paper or bidets or something else more hygienic) to wipe themselves after defecating, but they may have forgotten that even Mohamed didn’t mix his poop hand up with his eating hand. So it is that, as you watch the man in the video conduct his Muslim hygiene ablutions in a public square, he manages to offend both Mohamed’s own traditions and any Western notions of hygiene.

And yes, I’ll reiterate here that, for the reasons above, I’m pretty damned sure the man is not just an ordinary crazy guy nor is he part of a hoax. (Regarding the last point, I spend some time searching for any information about a hoax in connection with the video.) Given the man’s habits, his Islamic-style beard, and his non-European swarthiness, I’m voting for Middle Eastern Muslim transplanted from primitive backwater to European milieu.

No wonder that, in the wake of Starbuck’s announced plan to hire Syrian refugees, the following poster made the rounds: 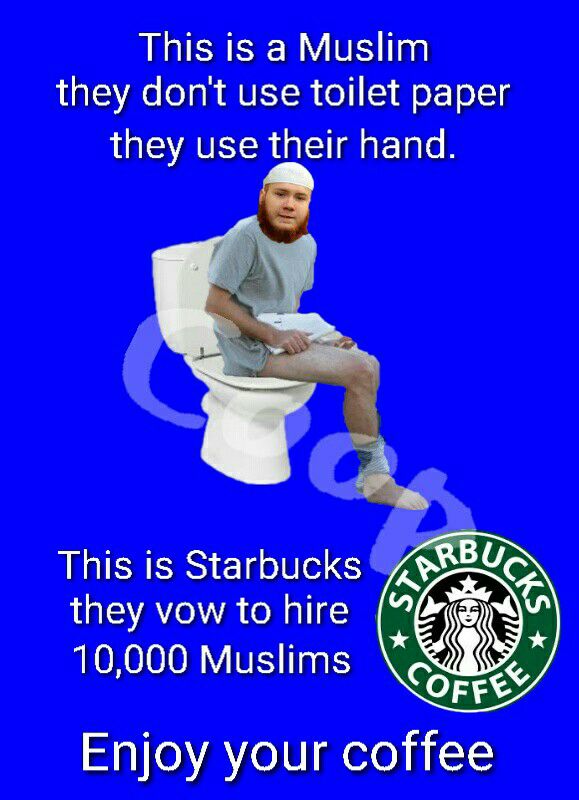 The reality is that Westernized Muslims have Westernized habits, which include having toilet hygiene no better or worse than their Western peers. However, I have absolutely no doubt that the many of the refugees who have been streaming into Europe and that the Left wants to see streaming into America retain their traditional Muslim hygiene. There have been many stories about Muslims having confused approaches to public spaces and poop. This story out of Germany makes it hard to tell whether the pooping was from ignorance or as a way of defiling Westerners. Still, this story from Austria implies a culture comfortable with being around fecal matter, much in the way of any primitive tribesmen.

I actually don’t blame country mice Muslims, those who come from Middle Eastern backwaters, for not knowing better. How can they be expected to know better? Not blaming them, though, does not mean I want to have them triggering the next typhoid or cholera outbreak in my city, a la the famous London cholera outbreak.

Putting all political rhetoric aside, taking in refugees is a serious cultural responsibility, not just to the refugees, but to everyone else. Some of these refugees are ticking time bombs because they are the enemy disguised as suffering refugees. Others are ticking time bombs because their cultural habits are so antithetical to Westernized norms that, unless every single one is trained and endlessly supervised, each of them could be the next epidemic.