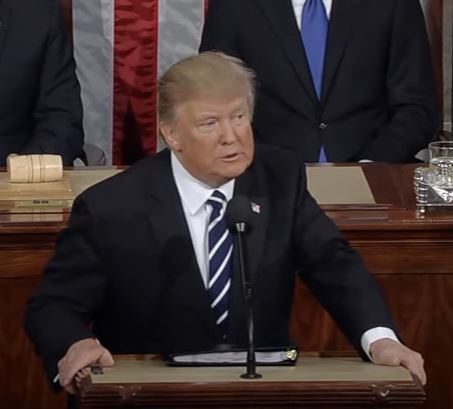 I’m sitting here in a glorious post-SOTU haze, thinking about the crazy world in which we live and hoping that Trump can find the path to fix it.

I’m working on a project that will, I hope, come as a pleasant surprise to many of you. In the meantime, here’s a quick round-up of cool links with facts that are useful in our bright new world, just one day after President Trump gave that stellar, even Reagan-esque State of the Union address.

A few last words about that wonderful SOTU. I was going to quote my favorite lines — and then I realized that I liked so many, there would be no room left for anything else in this post. I’ll just say again that it was a really wonderful speech — and the Progressives on my real-me Facebook feed have been left gratifyingly speechless. Since I cannot reduce my admiration to a manageable size, I simply recommend that you read Daniel Greenfield’s admiration.

As for me, rather than comment on a specific line or policy, I’d like to piggy-back on Greenfield’s point about hope’s return. Obama ran on “hope,” but all he offered was divisiveness and disdain. Trump truly loves this country and loves Americans — and people are picking up on that.

Trump is not only a patriot and an optimist, he’s also a futurist, in the old-fashioned Disney mold. Walt Disney, despite the Cold War, was incredibly optimistic about America’s boundless future, something I wrote about here. Trump reminded me of that. Here are a couple of videos for those of you who aren’t familiar with Disney’s Carousel of Progress animatronic show which is, to my mind, the most tangible representation of Disney’s awe about America’s past and faith in her future.

Creating a Chelsea Clinton. I’ve sort of been boycotting Commentary Magazine since John Podhoretz, the editor in chief, shot far beyond condescending #NeverTrump and landed squarely in nasty, vicious #NeverTrump. The other Commentary writers followed his #NeverTrump lead, although they never got aggressive about it.

Still, now that the dust is settling, there are still good things to be found at this venerable, thoughtful conservative magazine. For example, Noah Rothman has written a simply splendid take-down of the vapid, spoiled, meaninglessly ambitious Chelsea Clinton. If you want a good laugh, even if you worry that the Clinton tentacles might still have some life left in them, do read it.

Trump’s right about the refugees. In Sweden and most of the rest of Europe, it’s becoming clear that governments are hiding immigrant crime numbers. Here in America, they’re not so much hidden as downplayed and, in our vast nation, hard to tie together. Nevertheless, Daniel Greenfield does tie them together, showing just how dangerous these inadequately vetted Muslim immigrants can be to Americans. As Trump said,

It is not compassionate, but reckless, to allow uncontrolled entry from places where proper vetting cannot occur. Those given the high honor of admission to the United States should support this country and love its people and its values.

We cannot allow a beachhead of terrorism to form inside America — we cannot allow our Nation to become a sanctuary for extremists.

An urgent message to women in Europe. It’s too bad so many European women don’t have a Donald Trump speaking to them. Pat Condell is doing his best, though, warning them that the next election may be one of the last elections in which they’ll have a voice to defend themselves against the coming mass rape:

Go here to get links to see the articles Condell put together supporting the facts underlying his warning.

Speaking of dangerous immigrants and their progeny. . . . Did you know that Nidal Hassan, the American-born man raised in a Palestinian family who murdered 13 people at Fort Hood in Allah’s name, has announced he’s gay and transgender? Moreover, despite being on death row (awaiting his appeal), he wants taxpayers to pay for his “gender reassignment” surgery.

Hey! I’ve got an idea. Maybe the family and friends of the 13 people killed could give Hassan a free gender reassignment procedure in the groin area . . . only we would save taxpayer money by skipping the whole anesthetic part.

Of course, gays comprise only 2-3% of the total population and only an infinitesimal number of that small number goes bad, so it would be grossly unfair to stigmatize gays en masse as molesters and murders. Still, the psychopathic narcissism when it does bloom is impressive.

Given that bad gays are very bad indeed, here’s something a bit strange: Disney is getting huge virtue signalling points for the fact that, in its upcoming live action Beauty and the Beast it will showcase it’s first gay character:

Beauty and the Beast director Bill Condon revealed in an interview with Attitude that Gaston’s sidekick, LeFou, played by Josh Gad, will explore his sexuality in a “small but significant subplot” during the film.

“LeFou is somebody who on one day wants to be Gaston and on another day wants to kiss Gaston,” Condon said in the interview. “He’s confused about what he wants. It’s somebody who’s just realising that he has these feelings. And Josh makes something really subtle and delicious out of it. And that’s what has its payoff at the end, which I don’t want to give away. But it is a nice, exclusively gay moment in a Disney movie.”

If I understand the above correctly, the object of LeFou’s affection is a murderous, narcissistic psychopath. I mean, I’ve seen the original animated movie. It ends with Gaston leading a mob to kill Beast and, when the mob fails, trying to finish the job himself.

Piers Morgan — of all people? I’ve always found Piers Morgan smug, condescending, and rather nasty about Americans. So how is it that he’s emerging as one of President Trump’s staunchest defenders? Truly, the world is turning upside down.

Just don’t let it turn so far that Oprah is our next president. I truly cannot stand that woman. She’s the soft, cuddly side of the mindless emotionalism that dominates too much of American politics today. She’s like poison berries: sweet to the taste, but they still kill.

Speaking of the Oscars, a friend of mine who blogs at To Put It Bluntly traces Hollywood’s decline through a line of pictures leading from High Noon to Fist Fight. I haven’t actually seen any of the movies he’s named, but I still got the gist of his sad, sad post.

Nancy Pelosi and her team are delusional. I noticed when I watched SOTU that a bunch of Democrat women were dressed in white. To me, they looked like mourners at a Chinese funeral, something I found appropriate given the way the Progressives have turned themselves into a death cult around abortion and euthanasia. Others have pointed out that the political party that gave birth to the white-clad KKK might want to avoid all those shiny white clothes.

But what’s really weird is the message Pelosi thought she was sending:

Tonight, our Democratic #WomenWearWhite in support of women’s rights — in spite of a @POTUS who doesn’t! pic.twitter.com/kKJpfV5iUE

You all know that I play pretty close attention to politics. Despite that, I haven’t noticed Trump put forward a single initiative that takes away women’s rights. Have you?

I also refuse to accept that he denies women their rights because he said 11 or so years ago that rich and powerful men can grab easily grab a handful of woman (true dat). I’m completely certain in my own mind that, after noting this fact for the boys on the bus, Trump was going to add, “I know this, because Bill Clinton constantly boasts to me about walking up to women and grabbing them” — and he was stopped from saying that only the conversation ended before he had the chance.

Daddy, dearest. Speaking of things I find strange or weird or peculiar, maybe I’m the only one who finds it bizarre that the black community has this shtick: “It’s your fault we’re this way. You destroyed us. You ruined us. You’re racist pigs who hate us at both the individual and the institutional level. We demand that you fix us!”

Were I in their shoes, I might say, “So please, please just leave us alone to repair our own ills.” But they don’t.

Truly, though, the real ill in black communities seems to be the absence of fathers. I’ve written before about the fact that, when the government moved into the black communities, it displaced men. Black men were reduced to proving the potency of their weapons, whether we’re talking guns or . . . well, you know what I mean.

Fathers matter. In my community, which is affluent enough to have seen a lot of divorces, so many children, both boys and girls, have been devastated when their fathers vanished. The ones who seem to have thrived best are the ones whose mothers were fortunate enough immediately to enter into another relationship with a good man who would be a father to her children. The others? Drugs and sex. Sex and drugs.

My recommendation? Start off by reading Jake Novak’s guest post at Seraphic Secret about fathers and Hollywood. Then, think about other ways to change the culture to bring fathers back to America’s lost children.

Lesbians trapped in men’s bodies. I have been dining for years off of a true story, which regular readers will recognize, as I’ve included it often enough in this blog:

A woman I know had a rather distant relationship with her parents. Some time after her mother died, she went to her home town and dropped by her father. To her surprise, he answered the door in full drag. He explained that he’d always been a woman trapped in a man’s body but, with his wife’s passing, he could finally be true to himself. He was on the list for a full medical gender reassignment, complete with hormones and slicing and dicing.

The woman wished her father well and said good-bye after their talk.

A couple of years later she found herself in her home town once more and, again, went to visit her father. To her surprise, he answered the door looking like his familiar self: a man in man’s clothes. When she asked, he explained, as follows:

That is a true story. Apparently this article is true too: The Trans Women Who Become Lesbians After Years As Gay Men.

Outside the huge bell curve of normal sexual identity and sexual behavior, things get really confusing.

Speaking of mentally messed up people. All those Lefties on parade oozing compassion and self-righteous fury about illegal immigrants, gender confused people who mess with sporting events, murderous refugees, etc. Even thought they’re drowning in virtue signalling, the reality is that they’re probably not any more altruistic or morally superior than you are. In fact, they’re just as self-serving as anyone else. However, in true Freudian fashion, they’re projecting their guilt onto others and serving it with a dollop of fury.