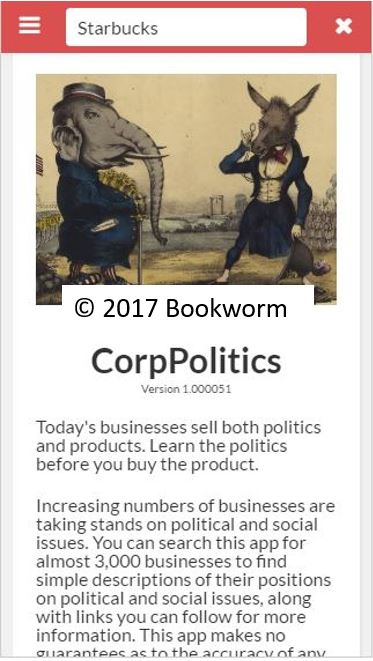 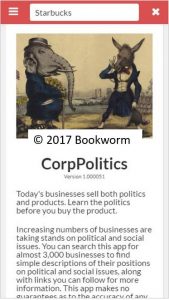 It all started when I took umbrage at the fact that companies were starting to boycott customers, a marked change from the usual free market model that saw customers boycotting companies. In response, I did a series of #BoycottTheBoycotters posts (this is the most recent), complete with charts identifying the companies involved in the boycott. As the charts got longer and longer, readers wrote in complaining (quite rightly) that they were having problems finding corporations in the mass of almost 900 and more names. I therefore created a link to a searchable chart.

However, once I started down that path, it occurred to me that business has been so politicized of late that I would like to find out about a company’s positions on many things, not just the Breitbart boycott. It would also be useful to know who loves or who hates a given business and why. (For example, when a business has contacts with Israel, that engenders love on the pro-Israel side and hate on the pro-Palestinian side).

Once I started down that path, my list burgeoned. It was long, it was clumsy, and it wasn’t the kind of thing a consumer could easily search when standing in the aisle at a grocery or hardware store.

That’s when it occurred to me to design an app — and at this point, I’m asserting my copyright over all of the information I’m describing below (© 2017 Bookworm). The app would have an easy user interface, allowing people to search for a business by scrolling through a laundry list or typing its name in a search screen. Clicking on the name would take the user to a screen consolidating the overwhelming amount of information that is already publicly available on the internet, complete with hyperlinks showing the source for the information and allowing the user to investigate the matter further on his or her own. Here are some screen shots showing how this would work: 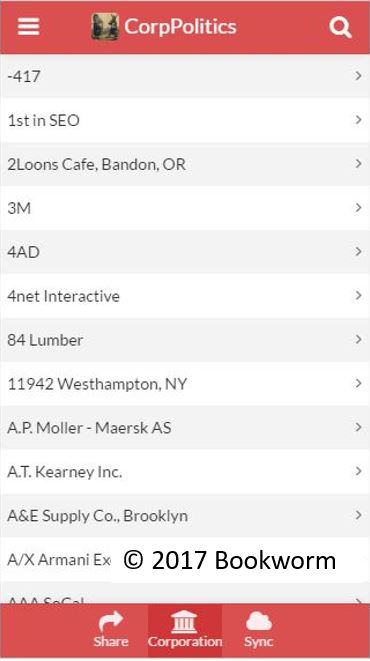 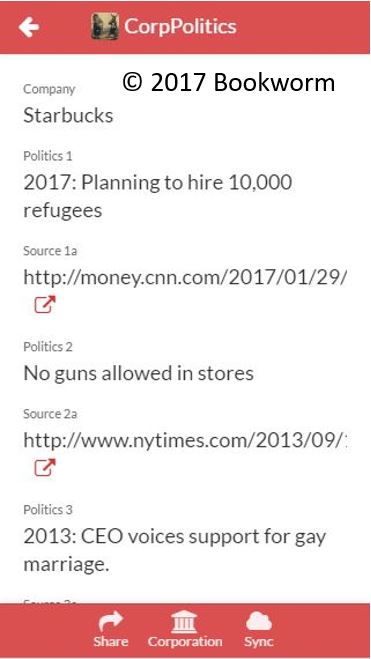 Because I am interested in profit, the app does not favor any political party or belief. Instead, thanks to more hours than you can guess spent searching for and sifting through information, it just contains thousands of pieces of information about where businesses stand on certain headline issues such as President Trump, LGBT rights, Israel and BDS, guns, etc. — or where various “outrage-tarians” on either side of the aisle stand vis-a-vis the business.

Before I do a public app launch, with all the attendant complications and costs of loading it onto Google Play and the iTunes store, I want to make sure it’s an idea with legs. If you would like to be an early adopter, playing around with the app on your browser, please send me an email at bookwormroom *at* gmail.com. I can’t guarantee that everyone who emails will get the link that allows them to play with it in a computer browser. That depends whether I’m inundated with requests (not likely) or hoping that at least one person will drop me a line.

If you do agree to Beta test, I’d appreciate any feedback you can give me — Is the information useful? Is it arranged in an accessible way? How much would you pay for an app like this? And of course, any other feedback you can think of.

Also, even if you don’t want to be a Beta tester, please feel free to post comments with your opinions about my idea. (And of course, for all Beta testers and other opinion givers, those opinions, once given, are your generous donation to my project and become my property.)

I’ll keep everyone posted on this project and continuing updating the information contained within it. Given the speed with which the world changes and how the internet reflects those changes, keeping the app current will be an endless task. Still, I found it rather eye-opening to learn so much about companies that do business in America.