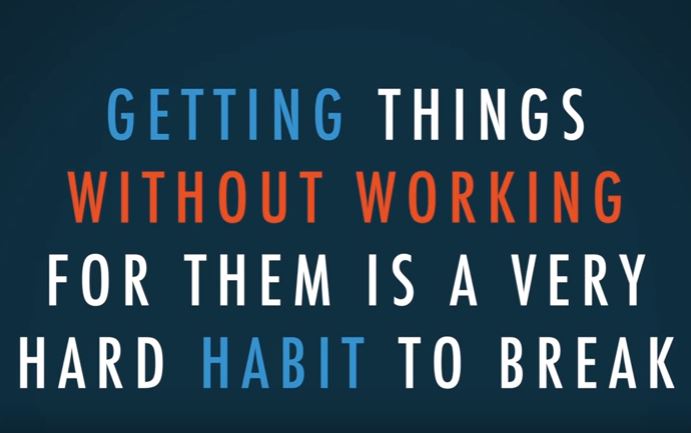 Yet another informative, persuasive Prager U video, this time with Arthur Brooks, of AEI, explaining how best to leave poverty behind.

I’ve said it before and I’ll say it again: When it comes to simple, but never simplistic, lessons about core issues such as the economy, morality, national security, gender roles, immigration, poverty, etc., there is nothing out there better than Prager U. Every time I watch one, I’m convinced that, instead of spending obscene sums of money on Little Bookworm’s so-called “education” at an Obscenely Expensive Liberal Arts College, I should just sit her in front of the computer and make her watch every single Prager U video. She’d be better educated and, with the money I save on college, I could give Prager U a hefty, meaningful donation to go on making more of these spectacular videos.

Today’s video is about the difference between maintaining people in poverty (the Progressive way) and enabling them to lift themselves out of poverty (the conservative way). During the video, Arthur Brooks, the narrator makes the point that welfare can become a habit, sapping people’s will to work.

I’ve made that same point here endlessly. One of the main problems with the middle- and upper-middle-class Progressive is that he is incapable of understanding that not everyone aspires to his trendy, affluent lifestyle. Thanks to having a close friend who lives (happily) in a marginal existence, I get to hear about my friend’s world: homeless people, people who survive on various welfare programs, and the handful who want out.

The homeless are (1) drug addicts, (2) alcoholics, and (3) crazy, although it’s hard to tell if Item (3) is organic or a byproduct of (1) and (2). The “perpetually on welfare” people all drink and use drugs in quantities far in excess of the more successful people in my world. More significantly, the “perpetually on welfare” people are fine living in a marginal neighborhood, bartering with each other for the goods and services they need (including drugs), and shopping at Wal-Mart. As long as they don’t have to work, they do not aspire to anything more in their lives.

As for the tiny handful of people in my friend’s world who actually work — and, indeed, work hard — the problem is that they cannot seem to break free of their routine drug and alcohol use. If they could leave behind these bad habits, they could probably catapult themselves into the working or even the middle class. However, given how their bad habits undercut their efforts, I wonder why they bother to work. They’re like hamsters on a wheel, busy, busy, busy, but going nowhere.

My observation has been that, for the most part, poverty amongst these folks isn’t bad luck or racism (they’re all white). It’s a combination of substance abuse and satisfaction with a marginal status quo supported, not by ones own labor, but by government handouts.