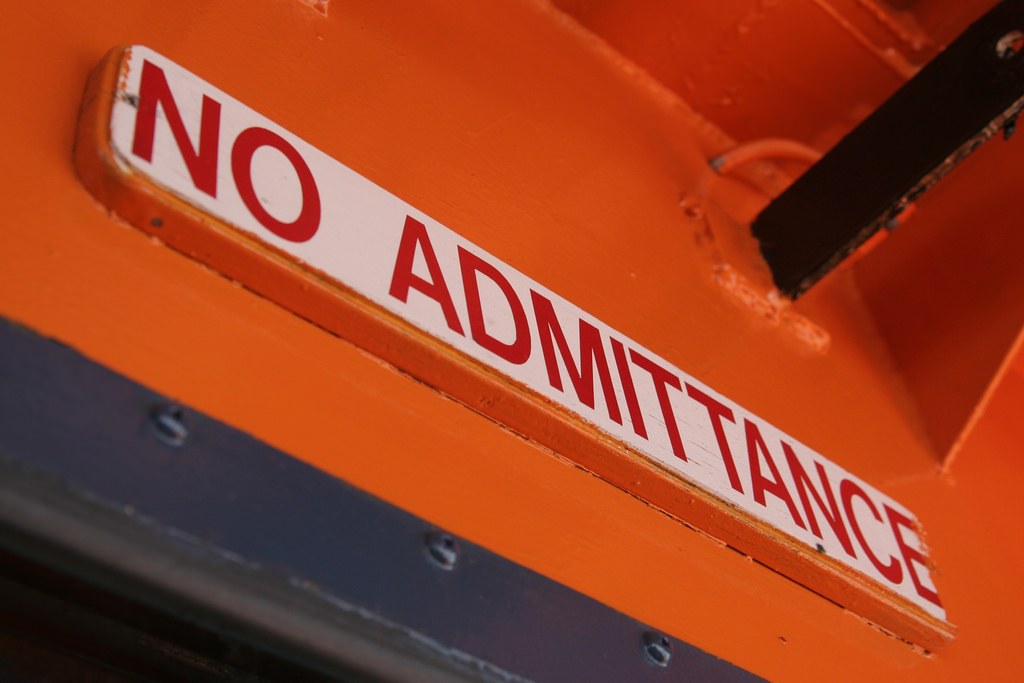 Almost a decade ago, in a post entitled “The scam what am,” I described one of the few things that make me, a rather temperate person, start ranting like a crazy woman:

If you want to witness the interesting spectacle of my going from a fairly mild-mannered, motherly lawyer type, to a screaming, foaming-at-the-mouth harridan, mention one acronym: MCLE. This stands for Minimum Continuing Legal Education, which I found an inconvenience when I was a big firm attorney and that I find an economic and time burden now that I’m a solo.

Continuing legal education did not used to be a mandatory requirement for practicing law in California. When I started out as a lawyer, legal organizations and legal publishers would put together seminars and send out fliers in the hopes that lawyers would attend. Often lawyers did attend because the seminars involved the lawyer’s practice area, and they promised to be interesting or to give the lawyer an edge professionally. Lawyers took the classes on a strictly as needed basis, so that a lawyer who was just plodding along in a single area, reading the cases as they came out and churning through relatively uninteresting legal cases, might attend one seminar a year. For example, a litigator might attend an annual half day seminar on new pretrial procedures. (Or he might just read the new legislation emanating from Sacramento every year, or check the update to his favorite legal treatise, which would spell out all of the new procedural requirements.)

Then, in the late 1980s, the California State Bar suddenly announced that, if lawyers want to keep their licenses, they were required to take 36 hours worth of seminars over a three-year period (a requirement since lowered to 25 hours over the same three years). Not only that, but lawyers couldn’t just take classes in areas that might benefit them as practitioners. Instead, they also were (and are) required to take several hours of classes in law practice management, legal ethics (which could theoretically help some lawyers out there), substance abuse, and identity politics — oh, sorry, that last should be “Elimination of Bias.”

Over the years, in addition to lowering the number of required hours, California also allows lawyers to complete all of their hours online. Thankfully, the free market, which sees online providers throughout the United States competing for customers, means that I can get 25 hours of MCLE for a mere $60. Of course, the “classes” I take have nothing to do with my practice area but, for $20 per year and some boring background noise while I cook or do laundry, I can live with it.

Living with it, though, doesn’t mean I like it. That’s why, when I had the opportunity four years ago to hear Clark M. Neily, III, speak, his talk really resonated with me:

The subject of his talk was the poisonous effect of the “rational basis” analysis that the Supreme Court has mandated for cases involving government infringement on an individual’s right to work.

In other words, Neily thinks that courts are imposing an unconstitutional test that unconstitutionally deprives people of their livelihood, all in order to enable professional monopolies that freeze out newcomers:

If you protest a state or federal law imposing such a great burden on your profession that you cannot run a viable business, or that imposes ridiculous impediments as a predicate to holding a certain type of job, the federal court judge hearing your case will ask the government to justify the law. Fortunately, for the government, the standard, known as the “rational basis test” is so low that it requires no facts or analysis, just imagination. Worse, it turns the judge into an active part of the government’s defense team. Or as Neily explains:

Unlike strict and intermediate scrutiny, it does not involve a search for truth but rather an exercise in creativity. Instead of trying to determine what the government is really up to, as they do in other cases, judges applying rational basis review are required to accept — and even help invent — purely imaginary explanations for the government’s actions. (p. 50.)

Here’s how this standard played out in a real case that is near and dear to Neily’s heart. Sandy Meadows was a Baton Rouge, Louisiana, widow with one marketable skill: she could arrange flowers. We’re not talking the fancy flower arrangements you see in the lobby of deluxe hotels. She put together the little posies at the local supermarket and was paid a livable salary to do so. Unfortunately for Meadows, the state of Louisiana requires that florists — with a florist defined as anybody who assembles more than two flowers and sells them — to have a license.

Meadows took the license test five times and failed it five times. Lest you think she was an ignoramus, she wasn’t. She didn’t have a problem with the 50 written questions. Her problem was with the practical exam. In Louisiana, anyone who wants to put together posies for profit must assemble four arrangements that are then judged, not by some bureaucrat (which would be bad enough), but by a panel of florists who are given a chance to size up potential competition. That’s where poor Meadows failed every time. She wasn’t alone. I believe Neily said that the floral panel passed only 37% of test-takers. Neily compared this to Louisiana’s State Bar pass rate, which is 61%. In other words, it’s easier to become a lawyer in Louisiana than to become the gal who puts together bouquets at the local Piggly Wiggly.

Neily, on behalf of the Institute of Justice, took on Meadows’ case . . . and lost. He lost because the “rational basis” test meant that the government could come up with any nonsense it wanted to justify a monopolistic licensing requirement and, when the judge wasn’t convinced by the government’s arguments, he was able to come up with his own, even sillier, reason for having the state put its giant thumb firmly on the scale on the side of florists.

I’m not putting up today’s post just to rehash the glories of my past posts. Instead, I’d like to introduce you to a lawyer friend of mine who is fighting an MCLE battle.

Up until three years ago, my friend was an attorney in good standing, practicing in the Southeast. Three years ago, due to non-legal demands on his time that prevented him from practicing law, he deliberately let his license lapse. Again, let me reiterate that my friend was a lawyer in good standing. This is not a situation in which the state took away his license because of professional malfeasance.

Having squared away the matters that kept him from the law — and, significantly, that prevented him from deriving any income from a legal practice — my friend is now ready to return to work. The state bar, however, has told him that it is not sufficient for him to start paying his dues again. Instead, professional licensing requirements mandate that, before the state bar will accept his money and reinstate his license, he must take three years of MCLE as if he had, in fact, been practicing law for those years during which he did not hold a license.

Worse, unlike the bizarre burst of sanity that had California limit its MCLE hours requirement and allow lawyers to complete their hours online though affordable programs — my friend’s state requires 16 hours of MCLE per year, only half of which can be completed on-line. The rest must be completed in person.

As was the case back in the 1980s when California mandated MCLE, creating a trapped cohort of lawyers who have to take classes whether they need or want to, the classes are incredibly expensive. Completing 8 in-person hours runs about $1,000.

Doing the math, if my friend wishes to resume his legal practice (as he does), he must spend at least $3,000 to take classes covering years during which he did not practice law and did not earn any money from practicing law. Now, do you see a rational basis for this particular professional licensing requirement? I certain don’t.

Keep in mind, too, that the state does not require that the attorney take classes in his practice area. That, at least, would make some sense. Instead, he just has to take classes. Lawyers in big law firms with big budgets have the luxury of seeking out classes that match their interests; the small fry, though, take whatever is cheap.

My friend is depressed. I, on the other hand, am completely outraged. As far as I’m concerned, his state his behaving in a vile and unconstitutional manner and I rant about it whenever I speak with my friend. My friend agrees but, as he points out, the state has the upper hand — he can fight it and probably lose, and most certainly never practice law again in that state. Alternatively, if he wishes to resume earning a living in his chosen profession, he can scramble for money he never earned to take classes he doesn’t (and didn’t need) in order to meet a requirement that bears no relationship to his ability as a lawyer.

Also, not only are these professional licensing requirements a travesty when it comes to my friend’s livelihood. They are also harmful to the consumer. My friend is an incredibly bright man and a wonderful lawyer. He also charged affordable rates when he was practicing law. Thanks to the monopoly the state is enforcing, though, consumers in need of legal service are deprived of my friend’s skills. The market is not free and it is worse off for his absence.

Proponents of form contracts argue that they make commerce more efficient by precluding the re-negotiation of contracts every time a business sells a good or service.

Courts are acutely aware of the inequitable bargaining power of the consumer, inherent unfairness, and potential unconscionability of adhesion contracts.  Due to the ‘take it or leave it’ nature of adhesion contracts, courts may employ the ‘doctrine of reasonable expectations,’ in addition to standard contract interpretation tools, to protect consumer expectations.

You’ll note that, in the commercial contract world, court’s will often void these adhesion contracts on the ground that they are the products of unequal bargaining power and unfairness, making them unconscionable and therefore unenforceable. However, when it’s a combination of entrenched lawyers, fearing competition, and MCLE providers, anxious for the profits to be derived from a captive class of buyers, the state willingly forces adhesion contracts on individuals seeking a livelihood.

Worse, the courts, rather than voiding these unnecessary professional licensing requirements, unreservedly backs them. When it comes to lawyers, of course, it’s worth remembering that the Courts are staffed by judges who have benefited from the monopoly these laws create.

I don’t have any nice wrap-up to this post about the unconstitutional burden of professional licensing requirements that are manifestly intended to maintain monopolies and force reluctant buyers into the hands of greedy sellers. I am outraged and my friend is resigned. And the system chugs on because the people who are outraged have no standing and the people who are resigned are stuck in a corrupt system. Feh!