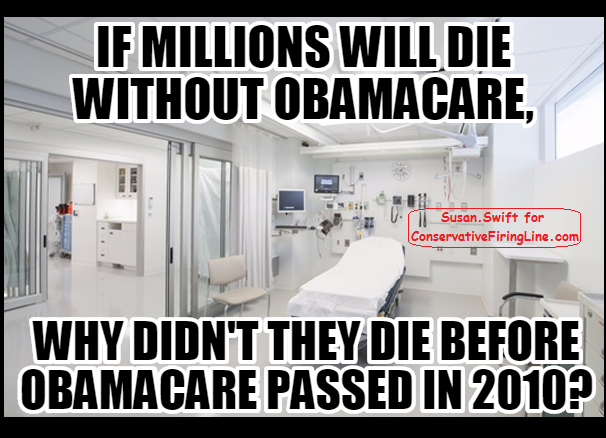 Contrary to the Progressives’ hysterical refrain that people WILL die if Republicans even touch Obamacare, facts show that under Obamacare people DID die.

Trump’s twitter spat with Mika (something the critics deplore but that, per my own informal survey, ordinary people either applaud or ignore) temporarily distracted the media and their Prog minions. Before the tweets flew, the media had been as one with Democrat politicians: If anyone even touches a hair of Obamacare, People Will Die!!! Remy put together one of his best videos attacking the ridiculous logical underpinnings of this Progressive meme:

(You can read the lyrics here. And in case you missed it, the reference to whipped cream relates to this news story.)

Remy has put together the logical argument to undercut Democrat outrage. However, what about the facts? Well, it turns out that, if you want people to die, you should just stick with Obamacare.

Jeff Jacoby explains in lucid fashion that, once Obamacare went into effect, America’s mortality rates increased. That is, more people were dying in a given time span than in that same time span before Obamacare chased people off their insurance plans and, if they were lucky, into the high deductible Obamacare plans:

When Barack Obama came to office, mortality rates in the United States had been declining for decades. By the time he left, deaths were on the rise. According to the National Center for Health Statistics, America’s overall death rate rose by 1.2 percent in 2015 (the most recent year for which data is available). It marked the first significant increase in death rates since 1999, and it was broad-based:

“Increases occurred among white men and women as well as black men,” The Wall Street Journal reported. “Death rates rose for eight of the top 10 leading causes of death,” including respiratory diseases, injuries, Alzheimer’s, diabetes, kidney disease, and suicide. Most ominous was the increase in deaths from heart disease, the nation’s leading killer.

As a result of the climbing death rate, US life expectancy shrank — something that hadn’t happened since the early 1990s, when AIDS and homicide were cutting down tens of thousands of lives each year.

It isn’t clear why Americans are dying at higher rates. But this much is plain: In the aggregate, the Affordable Care Act hasn’t kept more people alive. So lawmakers who supported the law should be accused of sending more Americans to their graves, right?

Although Jacoby says it isn’t clear why Americans are dying at higher rates now that Obamacare is law, Oren Cass shows that the drop in life expectancy is probably not coincidental but can be tied to Obamacare. His report is informative, detailed, and a little longer than the usual blog post. I’ll take the cheater’s shortcut and quote, not from Cass, but from a summary of Cass’s conclusions. Case shows first that the pro-Obamacare numbers were fatally flawed guesstimates:

#1. The various estimates of the alleged lives saved under ObamaCare were not based on actual mortality data. Rather, these pro-ObamaCare studies relied on previous episodes (such as the implementation of “RomneyCare” in Massachusetts) where the expansion of insurance coverage went hand-in-hand with improved health outcomes. Then, taking this correlation as a “fact,” the pro-ObamaCare researchers multiplied by the expansion of insurance under ObamaCare and came up with an estimate of how many Americans’ lives were saved.

Yet as Cass points out, this procedure is flawed. What the literature actually shows is that expansion of private health insurance coverage contributes to improved health outcomes. But under ObamaCare, the amount of private coverage went down relative to what we would have expected in the absence of the legislation.

Second, as Jeff Jacoby pointed out, Cass notes that more people have died annually under Obamacare than they did before Obamacare. That runs directly counter to the Progressive narrative that, in the years before Obamacare, people were unnecessarily dying like flies, that Obamacare saved them, and that any attempt to repeal (God willing). or even amend, Obamacare means “people will die.”

#3. But now we come to the third and most devastating component of the Cass study. He is intellectually honest and concedes that the uptick in mortality in 2015 could be a fluke, or it could be a genuine problem due to something other than ObamaCare. For example, there is a festering opioid epidemic in many parts of the US, so perhaps it was just bad luck (for Obama’s legacy) that this public health crisis happened to hit right when his signature legislature fully kicked in.

Yet Cass points out that we still have a pretty good control group to assess the specific impact of the Affordable Care Act’s boost to coverage. Specifically, only 31 states (plus DC) expanded Medicaid under the ACA, while the other 19 states rejected the offer. So if it’s true that the ACA really did “save lives” relative to what otherwise would have happened, but that the absolute mortality rate in the US went up because of some external problem (like the opioid crisis), then we should still expect see mortality rates jumping more in the “red” states that rejected Medicaid expansion.

And yet, as Cass points out in his study, we see the exact opposite. Namely, the states that took advantage of ObamaCare’s Medicaid expansion saw a worse impact on their mortality rates than the states that rejected the expansion.

I’m not arguing that our healthcare system was perfect before Obamacare. I’m arguing that Obamacare took a very imperfect system and made it worse.

One of America’s biggest problems is that employer insurance means that there is no relationship between the consumer when it comes to either the cost of insurance or the cost of medical care. This is a market perversion squared. (Switzerland, incidentally, does force citizens to buy insurance, which I don’t like, but it has no employer policies, which I do like. The Swiss buy their health insurance the same way we buy car or homeowner’s insurance.)

I’ve long felt that the insurance market should be disconnected from employer plans, that insurance should be sold nationally, and that state regulations need to be brought down to a “few rules but unbreakable” standard, rather than the thousands of rules that currently lard the insurance industry and drive up costs. With real competition, some of the insurers’ worst excesses would probably be reined in just because of market forces.