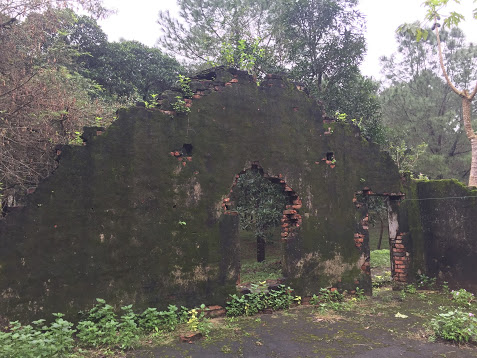 Ken Burns’ documentary about the Vietnam War is beautifully crafted and visually stunning, but very subtly sides with the North Vietnamese and Viet Cong.

I watched the first episode of Ken Burns’ The Vietnam War, a 16 hour documentary on PBS. It is, as is true for all of Burns’ documentaries, visually beautiful, factually dense, and meticulously crafted.

When it comes to the Vietnam War, I have a smattering of knowledge — my childhood memories of the nightly news, a recent trip to Vietnam, random articles and shows about the war, conversations with vets, and my personal convictions about communism.  I definitely do not have a sufficiently wide body of knowledge to intelligently critique the show’s substance. Still, that’s never been enough to stop me from having opinions and here, in no particular order, are mine:

1. The French were as nasty a bunch of colonialists as you could ever hope to find. After a video montage, the documentary begins in earnest with the French invasion of “Indo-Chine” in the mid-19th century. This was imperialism pure and simple, practiced at the tail end of the imperial age. Unlike the British, which gave its former colonies a civil structure that enabled all of them to thrive as relatively free societies, at least when compared to similarly situated geographic regions, the French turned the country into a large plantation run for France’s benefit.

Unsurprisingly, the Vietnamese people found their French overlords offensive. A nationalist movement came into being, aimed at driving the French out. The French responded with unbridled cruelty.

When we visited the infamous Hanoi Hilton in January, the prison is primarily a museum honoring the Vietnamese who were imprisoned there because of their efforts to expel the French from Vietnam. The French piled on a variety of tortures, both physical and psychological.

(Despite American tourism, the Vietnamese had torn down that part of the prison in which Americans had been imprisoned, leaving only two rooms in which the Vietnamese could explain how marvelously well-treated the Americans were. I’m not kidding. Here’s a video someone took of the video that plays on an endless loop in one of those two rooms.)

After WWII, when England was recognizing that colonialism’s day was over, the French still fought viciously to retain their hold on Indochina. These brutal fights were both on the battlefield and off. The most significant “off” battlefield fight was the one that de Gaulle waged against Eisenhower, who wanted to disassociate himself from Indochina while nominally supporting its independence movement.

Charles de Gaulle used blackmail to keep the Americans engaged there: Either you support us in Vietnam or we’ll “probably” throw in our lot with the Soviet communists. And willy-nilly, there we were, back in a toxic, no-winners mix of French colonialists, Vietnamese nationalists, and Vietnamese and International communists.

2. The documentary’s writers kind of like Ho Chi Minh. He’s portrayed as a true nationalist who only wanted to get his country back from the French. He’s presented as a sophisticated world traveler, a humane man, and a visionary.

Oh, and Ho loved his country and wanted to get it back from the French. Did I say that before? Why yes, I did. I repeated myself there because the show’s portrayal of Ho kept reminding me of Tom Lehrer’s song about Oedipus Rex, a great guy who had only one failing:

What kept on creeping into the show, although the writers tried to downplay it, is the way in which, whenever the communists gained control of a territory, they started purges. The documentary tries for parallelism between North and South. Thus, it back and forth between President Diem, down in Saigon, a Catholic nationalist who proved to be a tyrannical ruler in the mode of the French, and the inspiring Ho in the North, whose vision enabled his military leader, Col. (later Genl.)  Võ Bẩm, to get thousands of Vietnamese to carry heavy equipment labor across what’s now known as the Ho Chi Minh trail, engage in guerrilla warfare, and willingly lay their life down for his nationalist vision.

The narrative mentions almost in passing that there was that little purging problem whenever Ho’s troops gained control of territory. In typical communist fashion, if people wouldn’t voluntarily work with the communists, they were forced to go along anyway lest they or their family get tortured and then slaughtered. It’s a little thing, not worthy of any real attention, but it’s out there in the documentary, sort of….

Also, in playing up Ho, the narrative mentions, but only lightly, that Ho wanted to unify all of Vietnam under communist rule aligned with the Chinese (who supplied weapons) and the Russians. In other words, the West’s domino theory wasn’t far-fetched. This wasn’t just about ousting the French. It was about inviting in a new occupier, with Ho as the leader of a puppet government.

3. The documentary, at the beginning, gravely announces that the Vietnam War was a bipartisan disaster, with five U.S. presidents getting sucked into the morass. That’s a bit disingenuous. Democrat Harry Truman embraced the anti-communist fight. Eisenhower (Rep.), although a strong anti-communist, recognized a morass when he saw one and tried to get out. The only reason he kept a minimal American presence there and sided with the French was because of de Gaulle’s blackmail (see above).

It was Kennedy (Dem.) who threw America into the Vietnam War and Johnson (Dem.) who picked up the baton and escalated madly. Nixon (Rep.) shouldered Johnson’s war but, like Eisenhower, he recognized the futility of America’s presence. He therefore ended what one Democrat started and two Democrats escalated. To me, the documentary’s bipartisan blame-game rings untrue.

4. Another thing that leaks through is that Vietnam was a nation torn by violent factionalism. Throughout the 1940s and 1950s, there was factional fighting between North and South and within the North and South that took a constant, brutal toll on civilians.

What would have been interesting would have been some insight into what Vietnam was like before the French colonized it. Was it already then a semi-tribal society, governed by different tribes and kingdoms, with violent tensions between North and South? Or was it a peaceful place, a sort of demi-paradise, that the French despoiled with their voracious colonialism?

My understanding is that it was more the former than the latter. I believe this to be so because our guides in Vietnam spoke frequently of historic power struggles, with territory changing hands, foreign powers seeking to control the land, and tribal factionalism at local levels.

The following video seems apropos, simply because it reminds us that, while colonialism was bad, the nations that got colonized weren’t necessarily good, nor were European colonialists the first to interfere with local governance:

5. I hate Peter Coyote. He narrates all of Ken Burns’ recent documentaries and has what is quite possibly the most boring voice in the world. The only voice more boring, or as boring, is the man who narrates Frontline. Whenever Coyote speaks, I have to struggle to stay awake.

I also find it rather offensive that Coyote, a fanatic anti-war protester, gets to put his imprimatur on what will, of course, be viewed as the definitive analysis of the Vietnam War.

And those are my first impressions. I can’t guarantee I’ll blog about the documentary in future. Heck, with Coyote’s narrative, I can’t even guarantee that I’ll stay awake. My overall impression is that the documentary is meticulously crafted, visually rich, and that Burns is trying to be nonpartisan — it’s just that, unsurprisingly, his Leftist viewpoint ever so subtly leaks through. This is a shame because the Democrat narrative about the war is dishonest. I’m sure the conservative narrative is dishonest too. A decent documentary would openly acknowledge both viewpoints, give the facts, and let the viewer decide. This one doesn’t (or hasn’t so far).