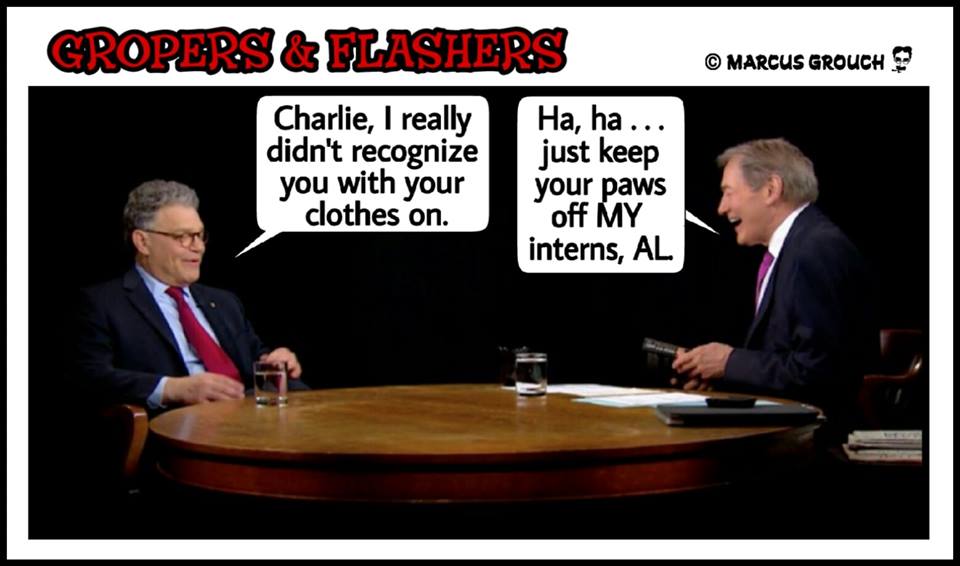 I’ve assembled a small (but solid) collection of sex scandals posters, plus a few of my own comments about Left//Right differences vis-a-vis the scandals.

And now my comments about these roiling, boiling, continuously new and (if hyper-hypocritical Progs are involved) enjoyable sex scandals:

1. The women’s movement has a share of the blame for the sex scandals now taking place — and no, it’s not because it was thanks to Second Wave feminism that women entered the workplace, thereby exposing them to the horrors of men (especially Progressive men).

Instead, I was thinking that it was thanks to Second and Third Wave Feminism that men were taught to abandon certain polite traditions towards women: giving up seats in subways, opening doors, and beating the ever-lovin’ crap out of men who made advances on their wives, girlfriends, daughters, sisters, etc. In the old days, predators would have been deterred because they knew that, if the woman went home and complained, they’d end up with a black eye, a broken nose, and a badly bruised body. Sometimes swift, rough justice is the best kind.

2. Angelo Codevilla argues that the Roy Moore scandal is about class — by which he means that Deep State’s battle against those who would destroy their stranglehold on government.

I think the class argument has a different element, more along the lines of Carville’s statement about dragging dollar bills through trailer parks. Roy Moore’s alleged wrongdoings are not “elite” wrongdoings. Despite his West Point degree, he’s not “one of us.” “We” don’t believe in God, live in “backwards states” such as Alabama, and abide by customs that the traditional ruling-class long ago abandoned — including the very old custom of pairing young women in peak childbearing years with men who can support them (i.e., older men).

The reality is that the Southeast is different from the Northwest in that it took longer to embrace the values of Second Wave feminism. When I went to law school in the Southwest 35 years ago (that is, only about 5-10 years after Moore was accused of seeking romance with young women), there were women in my class who were the first in their family to go to college, let alone graduate school, and who often had to fight to do so.

Their families loved them, but thought they’d do best married, with children (perhaps to a nice older lawyer), rather than being a lawyer themselves. Ironically, the reality of my graduation class is that a very large number of my female classmates worked for one year, married a lawyer (although usually he was the same age they were), stopped working, and started raising children.

3. Casey Chalk points out that the Left has become a shame-based culture. Thus, good behavior arises, not from moral and ethical precepts, but from conduct that looks good before others. In other words, the Left is an honor culture. What you do in private is irrelevant, as long as you don’t bring shame by breaking the rules in public. You know where else you’ll find the honor culture idea, which measures merit, not by ones beliefs and private (and consistent) conduct, but by outer presentation? Amongst narcissists and hardcore Muslims. This is not a good comparison for the Left.