I predicted 8 years ago that Obama’s Iran outreach would throw Israel and Saudi Arabia closer together, an alliance that has significant benefits for both. 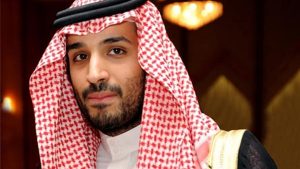 Although I haven’t written about Saudi Arabia, I have been paying a great deal of attention to what’s going on in that kingdom. If Prince Mohammed bin Salman can avoid assassination (and I devoutly hope he can), he is a true reformer. He is trying to upgrade women’s status, he is purging the most corrupt members of the royal family and, most importantly, he is behind the outreach to Israel. There have been rumors that a member of the House of Saud made a secret trip to Israel and, assuming that rumor is true, Prince Salman is the best bet.

According to the Turkish Anadolu news agency, reported here, the Grand Mufti of Saudi Arabia, Abdul Aziz al Sheikh, has issued a quite remarkable religious ruling. Answering a question on TV about the Palestinian Arab riots over Temple Mount last July, he didn’t merely denounce Hamas as a “terror organisation”.

Much more significantly he actually issued a fatwa, or religious ruling, forbidding war against the Jews; and he said that fighting against Israel was inappropriate.

How can this be anything other than highly significant?

After discussing the Grand Mufti’s conservative stands and enmity towards Israel, Phillips believes something important is happening:

Nevertheless, he is the most senior cleric in the state which has served as the epicentre of Sunni Islamic fanaticism and the most austere and conservative interpretation of a religion which has Jew-hatred at its theological core. If such a man is now saying that war against the Jewish state is not holy at all but must be forbidden on religious grounds, will this not have some impact within the Islamic religious world for which holy war against the Jews is an article of faith?

Phillips and my friend Wolf Howling have reached the same conclusion about Saudi Arabia’s softening towards Israel. This is what Wolf Howling wrote me:

In the larger context of what is going on, it makes complete sense. Indeed, nothing could be more Islamic than the old saw that the “enemy of my enemy is my friend.” Hamas, nominally a Sunni organization, is funded by Iran. And nothing will drive the Saud clan into the arms of Israel quicker than being clearly threatened by Iran. Seems to me that when Obama threw the weight of the West, and its billions in cash, behind Iran, he may have done more in the long run for Middle East peace than anyone else in history. He made Iran such a threat that all of the non-Shia Middle East has to react against the mad mullahs.

I will say this for the Sauds. They are an incredibly corrupt clan, but they also enjoy their petro-billions and have no desire to so rock the boat that they have ever willingly joined in the Middle East wars of their era except on the most tangential level. True, it is their Wahhabi religion that has created the world wide mess that is radicalized Islam, but the Sauds funded and fanned that toxin to keep Wahhabism pointed at outward expansion, not at inner Saud corruption. If the Saud clan were not frightened of the Wahhabi scorpions in their midst, one gets the feeling they would all, each and every one of them, much rather be on the Riviera drinking Scotch and banging European hookers.

Exactly. Salman is reforming to survive — and more power to him. I don’t care what his motives are. I just care that Israel might have gained a powerful ally. I also think it would be a wonderful thing if Saudi Arabia, which is seeing its petro-wealth fade away to dry wells and American fracking, takes steps to enter the 21st century, a world in which women have some equality and the men (who are notoriously resistant to work thanks to decades of petro-wealth) begin to act like real men, and not effete, pampered, tyrannical princes.

One more thing: As you watch shifting Middle Eastern alliances, keep in mind the fact that Egypt too, under al-Sisi, is working more closely with Israel.

To pat myself on the back, I’ll just quote from a post I wrote in May 2009, when Obama first began his attack on Israel (which ended with his abandoning Israel at the UN) by trying to force Israel to admit that it has nuclear weapons. As I commented in 2009, Israel was never interested in a nuclear arms race. She sat quietly on her armory, with her very silence telling the hostile nations surrounding her that, while she will never use them offensively, she will, if necessary use them defensively.

In that same post, regarding Obama’s simultaneous groveling outreach to Iran, I had this to say:

The other thing that Obama fails to understand is that, even if Israel is forced to show her hand and the pressure is on for disarmament, Iran will never disarm.  It will lie, lie, lie, and lie again to ensure that it continues to have a usable weapons stock pile.  While Israel’s goal is a simple one:  to stay alive, Iran has a much more sophisticated set of three-tiered goals.  Its first goal is Israel’s destruction; second, it seeks Middle East domination; and third, it desires world domination.  Israel and all of the other nations in the Middle East understand Iran’s first two goals.  Obama and team, despite their myriad degrees, don’t seem to understand any of Iran’s goals.

It will be interesting to see if Israel can withstand Obama’s pressure.  I’m reasonably optimistic that, with Netanyahu at the helm, Israel understands what Obama is doing and understands what will happen if he gets away with it, and will resist this threat.  I also think that, under the rubric of “the enemy of my enemy is my friend,” allegiances are going to start shifting in the Middle East.  Saudi Arabia, Jordan, Egypt, etc., may hate Israel, but they fear a nuclear Iran even more than they hate Israel.  My long-held suspicion since Obama’s election (which instantly meant Israel lost her only friend) is that Saudi Arabia, somehow or other, is going to give Israel cover for an attack against Iran.

Before I give myself too many pats on the back, let me hasten to add that the outcome we see today was obvious to the meanest intelligence back in 2009. Obama is not stupid, but his ideological blinders were so all-encompassing that they acted as the functional equivalent of a profound IQ loss. The only alternative explanation to stupidity is to believe that, all the way back in May 2009, Obama began intentionally destabilizing the entire Middle East to achieve a Saudi rapprochement with Israel.

Of course, accepting this alternative view means that, beginning in June 2009, when Obama turned his back on the Iranians protesting against the Mullahs’ totalitarian dictatorship, he was looking ahead eight years in the future to a time when the Mullahs would become an unbearable threat to Saudi Arabia. Likewise, to justify Obama’s decision during the Arab Spring to (1) dethrone Egypt’s Mubarek, who had abided by the peace treaty with Israel and (2) replace him with a Muslim Brotherhood candidate who was so loathsome that the Egyptian’s rebelled and supported a military coup that included a leader farsighted enough to see Israel as an ally — well, we’d have to believe that Obama was almost magically prescient to foresee that particular chain of events.

Frankly, just as it’s ridiculous to see the actions as prescient, so it’s ridiculous to see any farsighted planning from other Obama initiatives in the Middle East, including his invasion of Libya and the overthrow of Qaddafi; his imaginary red line in the Syrian civil war; his refusal to acknowledge that Al Qaeda was rising; his ridiculing of ISIS; his deadly failure in Benghazi; his cash infusion to Iran; and his joining with Merkel to encourage the Muslim invasion of Europe.

Still, whether Obama was prescient or so stupid and ideological that he was an incompetent, misguided, and dangerous man, the result is the same: Armageddon became such a real possibility that  those living in a post-Obama Middle East have been forced to do whatever they can to stay alive. I’m pretty sure Obama was not prescient, but was, instead, just dumb . . . so no pats on the back for him.