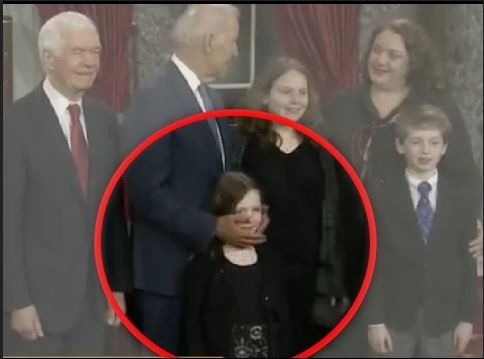 Something is very wrong in the West, and it’s not just creepy men such as Joe Biden. We’re also missing “manly men” protectors for women and children.

With Joe Biden making noises about running in 2020, when he’ll be a young-at-heart 77 going on 78, people are starting to focus attention on his strange behavior around little girls (and big girls too). Lots of videos are making the rounds showing unedited footage of Bad Touch Biden (aka Creepy Uncle Joe) hugging tight little girls and grown women he’s never met before, making awkward jokes about little girls’ maturity and dating, wrapping his arms around their waists so his hands are suspiciously near their as-yet nonexistent breasts, and (which is too me the strangest thing of all) compulsively sniffing and stroking their hair while fondling their faces.

If it weren’t for that last behavior, one could argue that Biden is just one of those old guys who’s awkward around young girls and that the endless riffs that see him positing that little girls are 17 years old or telling little girls to wait to date until their 30s are an old man’s kind of icky efforts to make small talk with children. One could also argue that his hand placement near girls’ breasts isn’t the same as handle placement on their breasts. And one could point out that, until we see all the footage of Biden enacting with children, whether male or female, when a parent is being sworn into Congress, the handful of videos we’re seeing is cherry-picking intended to make him look bad.

All those arguments, though, fall down in the face of that hair-sniffing and face fondling. If Biden only did it once it would be creepy and unacceptable. That he does it repeatedly simply emphasizes how horrible it is. Here — watch Paul Joseph Watson’s compilation:

The video shows something as disturbing as Biden’s creepy handsiness: The girls’ fathers passively accept or passively sort-of block Biden’s aggressive behavior towards their daughters. One father tells his daughter (and warns Biden?) that he’ll be close by. But mostly, they just grin uncomfortably. The only man who seems to have been at all assertive in blocking Biden is Jeff Sessions, whom Watson does not include in the above video. Here’s footage of Sessions gently pushing Biden’s hand away from his granddaughter:

It’s important that we understand that the recent flood of information about sexual harassment and sexual assault, as well as an increase in disturbing stories and videos about child predation, is not simply a result of predatory males. I’m not giving the predatory males a pass, mind you. They are awful; they are the worst outcropping of the Leftists’ obsessive focus on destroying all sexual boundaries, something I’ve posited is part of their push for control over people. They are vicious monsters and should be punished with the full force of the law.

In Texas, the law gave a righteous pass to a father who beat to death a pedophile he found on top of his child. That is a strong statement about a society’s willingness to let men protect those who are weaker than they are. Instead of a Texas norm, though, we have a generation of C.S. Lewis’s “Men Without Chests;” that is, men whom our culture has systematically stripped of the manly virtues.

Men are, by nature, meant to be aggressive, especially sexually. A healthy culture, which ours once was, starts teaching its boys to use that aggression defensively to protect women, children, and other weak people. Specifically with regard to the sexual aggression, our culture used to promise men that, if they kept women safe, they would get to marry a woman who would give them regular access to sexual fulfillment, as well as the promise that all of her progeny would be his too.

In an unhealthy culture, which is what ours has become, the more aggressive men become predators and the less aggressive men become . . . useless when it comes to protecting women and children from predators. And when predators know that there’s a sexual buffet awaiting their power plays, they fall on that buffet which unabashed, cruel, demeaning aggression.

I think, though, that there’s more to what’s going on than just culture. In addition to the Left’s fervent passion for destroying men through the “toxic masculinity” meme, maybe our Western men truly aren’t manly anymore:

Sperm counts among men have more than halved in the last 40 years, research suggests, although the drivers behind the decline remain unclear.

The latest findings reveal that between 1973 and 2011, the concentration of sperm in the ejaculate of men in western countries has fallen by an average of 1.4% a year, leading to an overall drop of just over 52%.

If you read further into the linked article, you’ll see the usual things at the top of the list of suspected causes:

Numerous possibilities have been mooted, with research suggesting links to body weight, a lack of physical activity, smoking, and exposure of pregnant women to chemicals found in myriad household products, known as endocrine disruptors.

I would add to the list women taking the pill before becoming pregnant. It’s known that becoming pregnant while on the Pill can increase the risk of hermaphrodism. I’m also sure I read somewhere (but admittedly cannot find) that a male fetus conceived not long after the mother stopped taking the Pill may have compromised male hormones. Certainly that would seem to explain away some of the explosion we’re seeing in gender-confused young people.

What I would really love to see is a breakdown of fertility between conservative and Progressive men. Conservative men still seem to have chests (witness the fact from the above video showing that those men working with Biden in traditionally “manly” jobs such as body guards are more than willing to protect their women), but Progressive men don’t. Is it that conservative men come from a more traditional, manly culture? Is it that boys exposed to plastics become weak-kneed Leftists?

Or with another nod to Paul Joseph Watson, if there is indeed a difference in masculinity between men on the Left and on the Right, is the problem the Leftist love for soy?

Okay, I’m not sure I take the above video very seriously. But I thought it was funny and that it did raise an issue about the change in the Western diet and male fertility.

Whatever the cause, we have a culture in which a man will passively watch as a woman or child under his protection is treated in an unsavory, vaguely sexual way. Worse, as we’ve seen with the Jimmy Saville scandal in England, pedophilia is no respecter of class, title, political orientation, so much so that it may have found a safe home amongst the most powerful who feel that they are untouchable when they engage in something that Western society considers the worst of all vices. (Joe Biden, are you part of that unsavory group of pedophile power breakers? I ask; I don’t accuse. I just accuse you of visibly creepy behavior around women and girls.)

When it comes to unprotected children, in America the lid is still sitting fairly tightly on the boiling pot when it comes to pedophile scandals. In the last month, of course, that same lid has gotten mighty unstable in Hollywood. Moreover, one of the least reported stories of the Trump presidency is his aggressive assault against pedophile rings throughout America. No famous people have been caught in the U.S.  but in Europe documented pedophilia has been proven at the highest echelons. Another Paul Joseph Watson aggregates the stories from Europe:

Okay. I’ve worked that subject to death. Pedophiles on parade. Men without chests doing nothing to block them as they mow down children and women. Now on to a related subject.

I want to say something about the Democrat attack on Roy Moore.  Democrats keep calling Moore a pedophile. He’s not. Even if one assumes solely for the sake of argument that Moore looked to younger women some 40-odd years ago, his focus was on post-pubescent young women. In that regard, he was guilty of nothing more than “ephebophilia” — which is not popular, but is not pedophilia.

The age of consent may vary from place to place and time to time, but in all times and places teenage girls have been considered sexually mature and marriageable, without regard to whether the man is their age or older. When the age difference is too vast, Western culture has been repulsed, but if it’s within ten or twelve years, traditional societies have considered that a reasonable spread: the man has presumably established himself as a stable breadwinner and the woman is of the age to give him children. He gets sex and progeny; she gets security.

To those faced with a Moore versus Jones decision in Alabama, rid your mind of the word “pedophile.” Consider instead that the facts show that the woman accusing him of fondling her when she was 14 (ick, ick, and more ick) is either lying or mistaken. Consider the fact that, once people got a gander at a clearly forged yearbook entry, both the accusing woman and her lawyer vanished. And consider the fact that Democrats have not shown themselves squeamish about lying to knock a Republican out of the running. (Rathergate is one example; Harry Reid’s open lies about Romney’s taxes is another.)

Had Moore admitted to his sins, as many in Hollywood have been forced to do, or had Moore’s sins been documented, as Franken’s assault on Leeann Tweeden was — well, then decent people would be honor-bound to turn from him. Here, however, Moore steadfastly denies wrongdoing and the allegations against him have been crumbling under closer scrutiny. In the absence of time to develop the facts, the only thing for a principled conservative to do is elect Moore and develop the facts later, when control over Washington, D.C. isn’t hanging by a hair.

As always, given these complicated and fraught issues, I’d be very interested in your take on the matter.