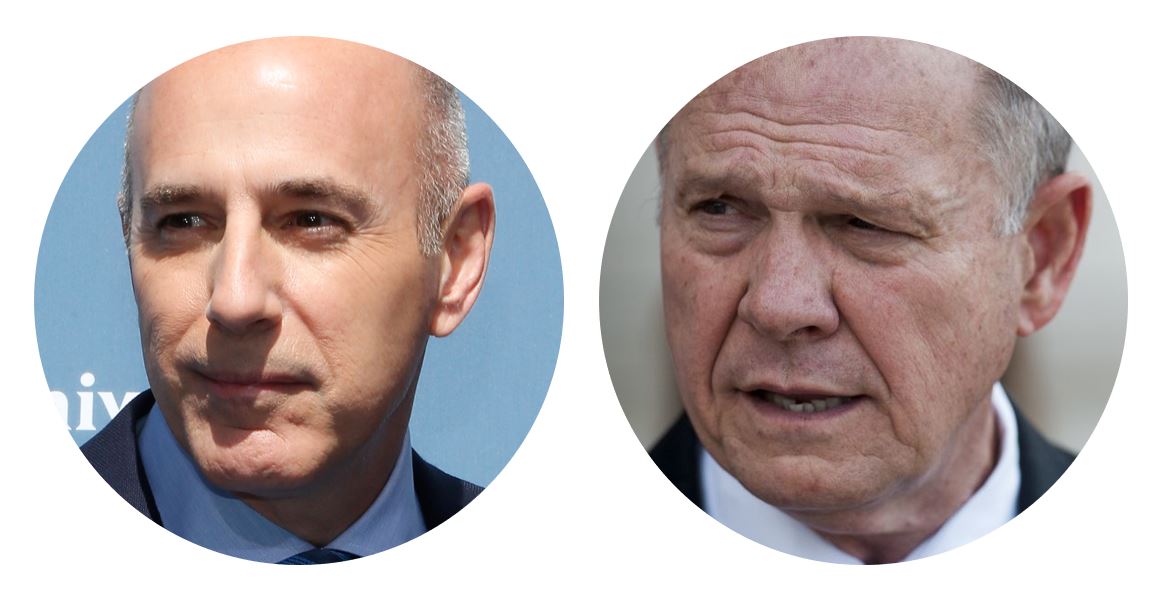 Neither Lauer nor Moore are in court so neither has a right to legal due process. Both, tho’, are subject to either business or political due process.

Is there anyone out there reading this post who does not know that Matt Lauer was abruptly fired this morning for sexual improprieties while on the job? Here’s the official tweet, which is remarkably straight and to the point. NBC’s public relations department worked overtime on this one:

Matt Lauer has been terminated from NBC News. On Monday night, we received a detailed complaint from a colleague about inappropriate sexual behavior in the workplace by Matt Lauer. As a result, we’ve decided to terminate his employment. pic.twitter.com/1A3UAZpvPb

The basis for Lauer’s firing was the fact that NBC “received a detailed complaint from a colleague. . . .” That must have been some complaint — and now that we’re hearing the whole “everybody knew” chorus about Lauer, it sounds as if the complaint wasn’t an isolated event; it was part of a continuing course of behavior that Lauer conducted with and before innumerable people.

The lawyer in me couldn’t help but imagine the decision-making process NBC had to go through. Only the naive would think the decision was made along the same lines as the decision-making process forced upon America’s colleges and universities thanks to Obama’s infamous edict, the one that insisted that all men were guilty as accused. That is, the NBC execs didn’t think “We’ve got this complaint before us and we have to assume it’s true, so let’s fire Lauer. We have no other option.”

Instead, NBC had to pay attention to two considerations. One is lawsuits. NBC had to balance the possibility that Lauer would turn around and sue them for wrongful discharge versus the possibility that the women harassed would (will?) sue them for an unsafe work environment. The second consideration was what NBC thought its audience would be willing to tolerate: Would the audience prefer that Lauer get discharged immediately or that he stay in place with NBC backing him during an investigation.

This two step analysis is “due process” business style. For simplicity’s sake, let’s call it “business due process.” This is the kind of thing the boss gets to do.

In Lauer’s case, NBC ran its business due process analysis and reached its verdict: (1) the allegations against Lauer are strong enough that there’s a greater risk of an expensive suit from disgruntled women if they keep Lauer on than there is danger that Lauer might subsequently file for wrongful discharge; and (2) the audience will be happier to see a potential sexual predator go than they will be to see a potentially wronged man keep his job during a formal investigation. Having reached its verdict, the boss (i.e., NBC) put on its judge and executioner’s hat and summarily fired Lauer.

That same business due process took place this morning at Minnesota Public Radio (“MPR”), which fired Garrison Keillor. There, too, MPR undertook a review: (1) Are we more likely to be suit if he goes than if he stays? (2) Will our audience be more forgiving if he goes or if he stays? Apparently the verdict was that it was safer both legally and in terms of audience response to discharge Keillor asap.

There are two caveats to this whole “business due process” concept. First, an employer may also make a moral calculus. However, to the extent I’m talking about a response to accusations, rather than a deliberative process to find the truth, I would argue that the moral calculus can only follow the deliberative process. Of course, if “everybody knew” and the charges are manifestly true on their face — well, I think the employer will find it very easy to express moral outrage, both as a private ethical matter and an appropriate public relations response.

Second, universities are not businesses. Male students accused of sexual wrongdoing are not employees. They are, if anything, the beneficiaries of a fiduciary obligation the universities have to those young people put into their charge.

The fiduciary obligation imposed on the university means that it must simultaneously assume that both the accuser and accused are telling the truth — an assumption that must be addressed through rigorous fact finding. Only if that fact-finding confirms that it is accuser who is more likely than not to be telling the truth should the university act, whether by expelling the accused and/or turning him (or her) over to the criminal justice system.

In other words, the university is not a place for “business due process.” And because it’s not a court of law, technically it has no legal “due process” obligation. What these education institutions have is a fiduciary duty, which is one of the highest obligations the law can impose on individuals or entities. The Obama standard, holding that men are always guilty as charged, is a gross violation of the university’s fiduciary duties to all of the students in its care.

And now back to the “business standard” analysis I was doing….

The sex scandal career massacres in Hollywood and the media all represent business due processes: Employers, whether the Weinstein Company, or MPR, or NPR (which just fired David Sweeney), or NBC, are desperately trying to avoid huge financial losses, both from (1) lawsuits filed against them for failing to protect employees or for wrongfully discharging someone and (2) audience anger at a company that turned a blind eye to morally repugnant behavior or that wrongfully impugned an innocent man. It’s quite a balancing act. In most cases, the charges are valid enough or the history of “everyone knew” compelling enough, that the bosses are firing people. That’s fine. I like to see Leftists turn on Leftists.

Political due process means that Mitch McConnell does not get to fire or refuse to seat anyone the People have elected who is available to carry out the functions of his office. Instead, the People need to do a recall, if one is available, or the People need to petition the politician to withdraw voluntarily. Until Minnesota voters speak, Congress and the Democrat party are and should be stuck with Franken.

The same political due process analysis applies to a candidate — say, someone like Roy Moore. As part of that political due process analysis, the voters may want to note note that Moore, unlike almost all the other men accused of sexual improprieties, has assiduously and aggressively denied the charges against him. Moreover, with the passage of time, it’s starting to look as if he did not do anything wrong but, instead, is the victim of a Leftist hit job.

For political due process, a campaign is the equivalent of a job interview with the voters. When the election comes, the People get to decide which candidate they want to hire for the job. Once that candidate is elected, as I said above, it’s not McConnell’s decision what to do. The People, who are judge, jury, and executioner, will have spoken.

I happen to hope that, when Alabama voters do their political due process analysis, Moore will win. With the dust settling, it appears that the allegations against him are either classist and regionalist (“he comes from those creepy, white trash Alabama hicks who approve of May-December relationships”) or highly suspect (an obviously forged yearbook, a mentally disturbed woman with a bone to pick, a young woman lying about her past, etc.). Additionally, I don’t think much of Moore’s opponent, who will shift the weight of the Senate towards open borders, weaker national security, activist judges, unlimited abortion rights, etc.

If I were an Alabama voter — meaning I’m the boss applying political due process — I would therefore conclude that he’s probably an innocent man who will certainly do the job I want once elected. Once elected, I would expect Mitch McConnell to seat him, because Senators are the People’s employees, not their bosses. And later, if it turns out (God forbid) that the allegations against Moore are somehow proven to be true, if he can still carry out his Senatorial responsibilities, it’s up to the People to mount a formal recall, do an informal letter demand that he leave, or primary him so that he does not appear on the ballot again.

NOTE: This post has been updated to correct my confusion about Garrison Keillor’s former employer, which is MPR, not NPR. The latter figured in a different story today, to which I’ve also linked in my updated version.