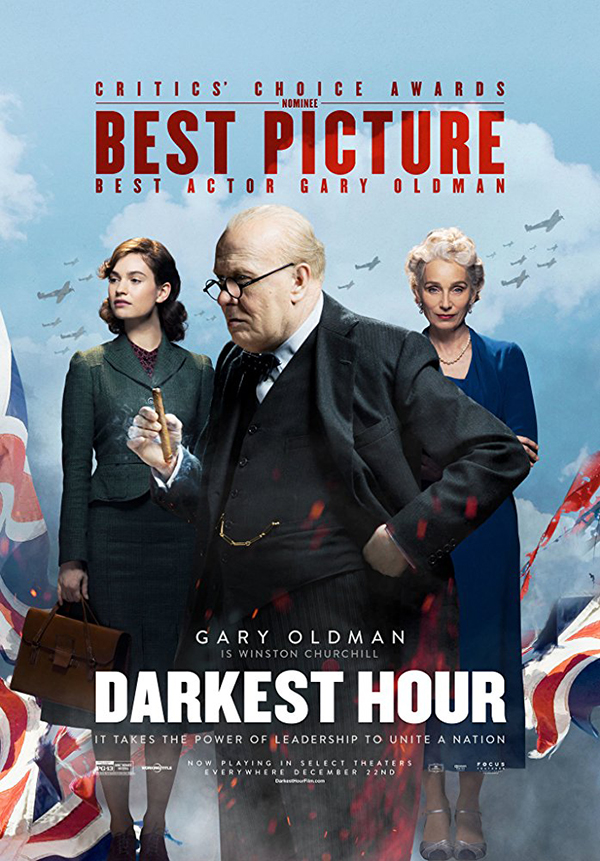 Darkest Hour is a wonderful historic picture on its own terms and an important modern allegory about standing firmly against encroaching tyranny.

I very seldom go to movies, as I almost invariably regret both the time and money I end up spending. Still, I was willing to take a chance on Darkest Hour and I’m awfully glad I did. It’s a wonderful movie, both on its own terms, and as an allegory for modern times.

The movie’s plot is relatively simple, unfolding over the course of a couple of weeks in May 1940. European countries are falling like ninepins before Germany’s amphetamine-fueled Blitzkrieg and Prime Minister Neville “Peace With Honor” Chamberlain has lost the confidence of his own party, causing him to proffer his resignation. Churchill, who had been sounding the tocsin about the Nazis throughout the 1930s, steps in as the new Prime Minister.

Viscount Halifax, who had earlier refused an offer to serve as PM, is nevertheless horrified that Churchill has the job. He, along with Chamberlain and George VI, are worried about Churchill’s explosive temperament, his unguarded utterances, and his history of bad decisions, beginning with the disastrous campaign at Gallipoli during WWI. Moreover, Halifax is the leader of those who think that England’s survival is dependent on a negotiated peace with Hitler.  As the British Expeditionary Force comes ever closer to annihilation at Dunkirk, Halifax’s certainty about a negotiated surrender, which Chamberlain shares, infects the war room over which Churchill presides.

Although there are a few scenes in which Churchill does not appear, the movie focuses tightly on Churchill’s interactions with his wife, Halifax, Sir Anthony Eden, the King, and a secretary during the pivotal days leading up to the Evacuation at Dunkirk. Apropos the secretary, played by dewy, lovely Lily James, I am happy to say that she is not used for some trumped-up cheesy romantic farce. Instead, the secretary exists so that we can hear Churchill dictating his thoughts, especially his speeches. Churchill’s romance is with his wife, Clemmie, whose character benefits from a brisk, warm performance by Kristin Scott Thomas.

The standout actor, though, is Gary Oldman who is, quite simply, superb. He looks and sounds Churchillian, playing the role with a wonderful panache. The supporting performers are necessary props, and they all handle their roles with elan, but Darkest Hour is Oldman’s movie.

Darkest Hour is also beautiful to look at. My companion was so impressed that he whispered to me halfway through, “The camera work is incredible” — and he was right. The historic details — the clothes, the typewriters, the maps, the whole mise-en-scène were exquisite — and every shot was imaginative without being obtrusive. We felt the claustrophobia of the underground war rooms, the devastation of battle, and, often, the tremendous isolation that envelopes the person at the top, the one who ultimately makes the life and death decisions.

There’s been something of a debate amongst Churchill-philes about the writers’ and director’s decision to include in Darkest Hour a completely made-up scene in the underground, during which Churchill gets a chance to meet the common people and learn about their feelings. On the one hand, it’s a terribly cheesy scene in an otherwise exquisite movie, a fact that makes it grating.

On the other hand, I understand the filmmakers’ compulsion to show that Churchill reflected how ordinary Brits felt with their land under attack. Back in the day, that kind of thing actually bothered them. It’s through this scene that we can understand why Churchill’s “We shall fight them” speech resonated beyond Parliament throughout the British Isles.

In addition to appreciating Darkest Hour on its own, historic terms, I couldn’t help but see it as an allegory for the existential war we now face against the fearsome fusion of radical Islam and Leftism. In the movie, weak, old Europe has fallen and Churchill, England’s driven, dynamic leader, is the only thing that stands between England and the same fate. Moreover, in making this stand, Churchill speaks for the normals (those underground passengers) rather than the elite (Halifax and the rest of the appeasement-oriented War Room).

Today, old Europe, including England, has fallen, although the Brexiters, like the true underground resistance in Europe, are making a last, desperate stand to resist the coming Lefto-Islamic tyranny. Meanwhile, in America, Trump is the colossus standing astride the schism between Normals, who want to defend their nation against Lefto-Islamic tyranny and the self-styled elite, who are desperate for surrender. As Churchill understood, the elite have a possibly reasonable hope of building walls between them and the coming tyranny. The Normals, however, have no defense but a political leader who believes in them and their values. Trump is that leader. (And I have compared Trump to Churchill before for precisely this reason.)