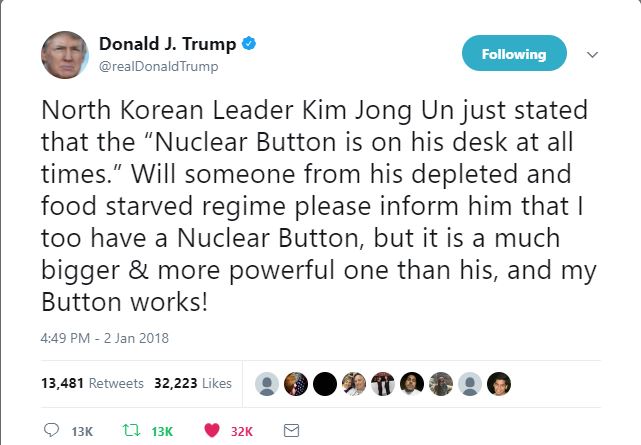 Wow! In an epic tweet, Trump really spelled it out to North Korea’s Kim Jong-Un. It’s going to be wild if the rest of 2018 is like this.

North Korean Leader Kim Jong Un just stated that the “Nuclear Button is on his desk at all times.” Will someone from his depleted and food starved regime please inform him that I too have a Nuclear Button, but it is a much bigger & more powerful one than his, and my Button works!

I’m not sure I can stand the excitement. I know that, even as I write these words, Progressives are taking turns fainting on couches, certain that the above tweet marks the first shot fired in a nuclear war. I think, however, that those who like a strong America as a bulwark against war-crazed tyrants are comforted knowing that we have a president who will not back down from a despot’s threat. Trump understands that you must stake out your position before the hyenas begin to gnaw on your body, not after.