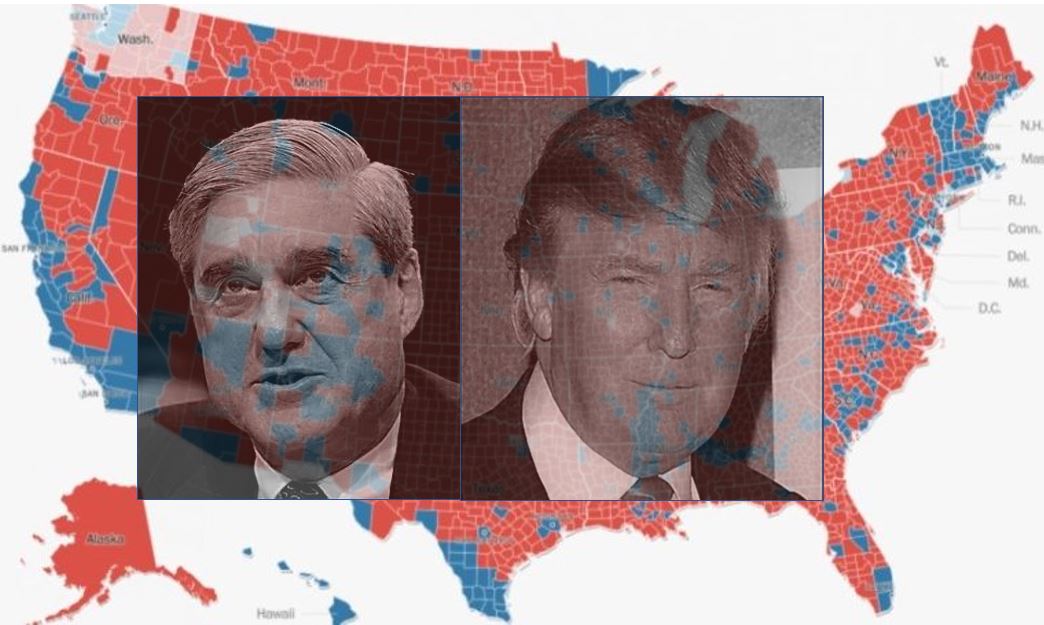 A year after the collusion story against Trump took hold, we know it’s fake and it’s boomeranging with potentially serious consequences against Democrats.

[Wolf Howling wrote this post, despite its being published under my name.]

The year 2017 started with the Proggies pushing the “Trump colluded with Russia” narrative to overturn Trump’s election. 2017 ended with the collusion narrative in tatters and on its way back to bite the Proggies in the posterior, if indeed, as it seems, the entire investigation, including FISA warrants, was a joint operation of the DNC, Hildabeast, Fusion GPS, and the FBI to criminally misuse the legal system to undermine Trump, both during the campaign and then after the election. It makes bugging the DNC headquarters at the Watergate Hotel look quaint in comparison.

Going full circle to the moment Trump fired Comey, the new hotness is, once again, that Trump obstructed justice. The only thing that comes anywhere close to a colorable obstruction claim was Trump’s telling Comey that he hoped the FBI could see its way to treating Michael Flynn with leniency. As I pointed out here at the time, Trump’s words, as well as Comey’s contemporaneous interpretation – that he was not being ordered to end the investigation of Flynn – always meant that the event cannot serve as the basis for an obstruction of justice charge. Period.

Indeed, it seems that the Proggies’ primal scream of “obstruction,” always inchoate, now extends far beyond, Flynn. The latest narrative is that Trump, to win the 2016 election, tried to obstruct the entire investigation into collusion between his administration and Russia. Leaving aside, for the moment, that it seems ever more likely that the investigation is itself unlawful, the Proggies are suddenly claiming that they are in possession of new evidence that Trump obstructed everything. This charge comes from the latest op-ed in the Times, Did Trump Obstruct Justice?

Reporting this week by The New York Times and in a new book by Michael Wolff significantly adds to the evidence that President Trump obstructed justice. Of all the elements that must be proved to establish the offense of obstruction, the one that is most critical is corrupt intent: Did Mr. Trump wrongfully intend to obstruct the criminal and congressional investigations? The facts contained in these reports strongly suggest he did.

What are these new revelations:

So, in the land of The New York Times, the mere fact that the President wanted a man he could trust to be nonpartisan – and whom he named to head the DOJ to maintain adult supervision over a partisan-driven investigation — is now evidence of obstruction? Just ridiculous.

Equally significant are new revelations that the president had drafted a letter to the F.B.I. director at the time, James Comey, describing the Russian investigation as “fabricated and politically motivated.” Those disclosures support that the president’s statements to the press and the public in connection with firing Mr. Comey were misleading.

This is a non-sequitur. Trump had been saying for months that he thought the Russia investigation was partisan hackery – and it is looking every day more like he was right.

True, at the time Trump fired Comey, Trump first had the DOJ draft a memo listing reasons why Comey could be fired, and Rosenstein certainly found ample evidence about the Hillary investigation. But the fact that Trump soon thereafter stated he fired Comey over his dissatisfaction with the latter’s handling of the investigation – i.e., leaving the public with the false impression that it was Trump himself being investigated – was itself ample and reasonable justification for firing Comey.

Indeed, Comey quite clearly stated that he ignored Trump’s multiple requests to correct the public record. To repeat: Comey did not tell the president to his face that he could not honor those requests; instead, he simply ignored them. No executive in his right mind would have tolerated Comey’s actions. Nor is there any evidence that firing Comey in any way impeded, or was meant to impede, the continuing investigation of “Russian collusion.”

To continue, the Times asserts that Trump advised his son on how to frame his testimony before the Congressional committees regarding the meeting at Trump Tower with the Russians:

[T]he Wolff book claims that the president’s lawyers believed that his efforts aboard Air Force One last summer to shape his son Donald Jr.’s statement about a meeting at Trump Tower with Russians was “an explicit attempt to throw sand into the investigation’s gears.” Mr. Wolff also asserts that one of Mr. Trump’s spokesmen quit over the incident because of a concern that it was obstruction of justice.

If advising a witness on how to word testimony about to be given is obstruction of justice, then every trial lawyer in this country is guilty. For those of who have, thankfully, never had contact with our legal system, every trial lawyer in this country, whether defense or prosecution, preps witnesses before trial. That is not obstruction. What someone advising a potential witness about testimony cannot do is advise them to lie. But there is no evidence that anyone advised a potential witness to lie. Wolff’s generalizations, being without any underlying specifics of an actual lie, are scurrilous.

Despite a complete absence of evidence, the Times is not done drawing inferences from air:

Another ominous note for the president is The Times’s reporting that the special counsel, Robert Mueller, has substantiated Mr. Comey’s narrative of his dealings with the president, including through notes maintained by members of the White House staff. Whatever one may think of some of Mr. Comey’s decisions, he has a spotless reputation for candor. The president’s reputation is the opposite. But in a swearing contest between two witnesses, a responsible prosecutor looks for independent corroboration no matter who those witnesses are. It seems Mr. Mueller is finding it.

This is just red meat for the Proggies – Comey the shining knight, Trump the evil lying liar. There is nothing in the public record – and we would know from Comey’s leaks and then his testimony – that gives substance to the obstruction claim where Comey and Trump tell different stories.

Moreover, Comey’s “spotless reputation” only exists amongst the Proggies. A reasonably intelligent third year law student could have raked Comey over the coals for the many contradictions in his June 2016 testimony before the Senate. Given the obscene travesty of justice that was the Clinton investigation as overseen by Comey . . . all I can say is, conducting discovery as to Comey’s veracity and then cross-examining Mr. Comey would be a joy.

Lacking either facts or argument has never stopped the Times before, and it certainly doesn’t stop it in its relentless pursuit of an obstruction argument. Thus, it goes on:

[The question of obstruction cannot] be finally resolved until Mr. Mueller and the president meet face to face, so that Mr. Mueller can hear his story and judge his credibility. We are presumably getting close to the point where the president himself is going to have to formally answer questions about his conduct and state of mind put directly to him by the special counsel.

Oh my. I would expect President Trump to tell Mueller, who has assembled the single most one-sided investigative team and grand jury since The Simpson’s Jury of the Damned, to go packing (although not in such polite terms). Indeed, anyone, from President Trump to Michael Flynn (in hindsight) to Joe Sixpack, who voluntarily talks to the FBI or Mueller’s team of hyper-partisans needs to have his head examined.

This Times op-ed is nothing more than an attempt to keep the fantasy alive that Trump will be impeached. It has very little to do with the law and everything to do with wanting to overturn the results of the 2016 election. That said, this determination to push the “obstruction of justice” narrative is just now beginning to boomerang on the Proggies as well.

To explain, Trump foolishly held out an olive branch to the Proggies on the day of his election. In his speech on November 9, 2016, he signaled that he was going to ignore the travesty of the Clinton email investigation – a true obstruction of justice – and the corruption of the Clinton Foundation to concentrate on all his other priorities as President. There would be no “lock her up.”

For Trump to ignore those partisan travesties of justice, while at the same time retaining Comey and McCabe at FBI, were huge errors. Nothing will sate our modern Proggies other than the total repudiation of Trump and their return to power. They don’t give a damn what they must do — short of starting a shooting war that they would lose — to make it happen.

At long last, though, some on the right understand the Proggies’ ultimate goal and, thankfully, one of those who has gained this understanding is President Trump himself. No wonder the Proggies are in an uproar, as they see disaster on the horizon. Exhibit A is this tidbit from CNN’s scurrilous Jeffery Toobin, writing at the New Yorker:

There’s been a bomb cyclone of revelations from and about the White House since New Year’s Day. But there’s a pattern. It all stems from President Trump’s contempt for the rule of law. The week began with a tweet from the President that, in a quasi-normal political environment, would have led to an impeachment investigation.

Richard Nixon earned eternal disgrace for keeping a list of his political enemies, but he, at least, was ashamed enough of the practice to know that he had to keep it secret. Trump, in contrast, is openly calling for the Department of Justice, which he controls, to put his political opponents in jail. This kind of behavior is a trademark of the authoritarians he admires, like Vladimir Putin and Recep Tayyip Erdoğan. It would be disgraceful under any circumstances, but it’s especially grotesque given that there’s no evidence that Abedin did anything unlawful. (A newly reopened investigation of the Clinton Foundation represents another attempt by the Administration to use law enforcement to harass his opponents.) In a similar vein, congressional Republicans last week invited the Justice Department to investigate Christopher Steele, the British former intelligence official who compiled an early dossier on potential contacts between Trump and Russia.

Apparently Toobin missed entirely Obama’s comments on the “stupid” police who arrested Henry Gates or the “if I had a son,” comments, or the time that Obama weighed in to claim that Hillary’s or the IRS’s criminal acts were not criminal at all. And surely don’t remind him about the curious timing behind Senator Mendendez’s indictment.

Yet in Toobin-land, Trump has “contempt for the rule of law” for calling out a black-and-white violation of our laws regarding classified information? Toobin is projecting more than Ashley Judd did when she condemned conservative men at the Pussy Hat march for the way in which Weinstein and other Proggie men abused and demeaned her.

Finally, add to this mix the FBI’s Inspector General potentially explosive investigation about improper partisan politics infecting the FBI. Leaks from that investigation have already led to some damning revelations, such as FBI agent Peter Strzok’s active conspiracy to commit an act he described as an “insurance policy” against Trump’s election, or the role that high-level DOJ attorney Bruce Ohr’s wife had working for Fusion GPS to create the Steele dossier.

The IG Report is expected at any time. I suspect once we get that, the boomerang will have traveled full circle for the Proggies.