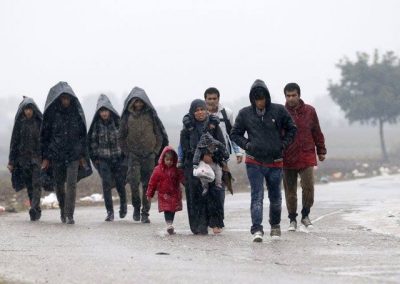 “Shithole countries” is accurate. The US deserves quality immigrants — and sick countries must stop using us as their sewer and address their own problems.

“Why are we having all these people from shithole countries come here?”  Did Trump really utter that sentence with reference to places such as El Salvador (parent country of MS-13) and various African nations? Who knows? The report comes from the Washington Post, which is about as reliable as the National Enquirer used to be before it was slammed with a $1.6 million judgment when Carol Burnett sued it for libel.

Still, even while doubting the Washington Post’s journalistic integrity, the White House’s official statement makes it plain that, even if the President didn’t phrase the issue so brutally, he believes that America does not need to copy Europe’s suicidal impulses in bringing in immigrants who will drain the economy, change the culture and, perhaps along the way, conduct the occasional mass slaughter against American citizens:

Certain Washington politicians choose to fight for foreign countries, but President Trump will always fight for the American people. The President will only accept an immigration deal that adequately addresses the visa lottery system and chain migration – two programs that hurt our economy and allow terrorists into our country. Like other nations that have merit-based immigration, President Trump is fighting for permanent solutions that make our country stronger by welcoming those who can contribute to our society, grow our economy and assimilate into our great nation. He will always reject temporary, weak and dangerous stopgap measures that threaten the lives of hardworking Americans, and undercut immigrants who seek a better lie in the United States through a legal pathway.

1. The president is correct that we currently have virtually unlimited immigration from truly appalling countries that suffer from high crime rates; significant contagious disease problems; mass illiteracy; a tendency towards pedophilia, and, in the case of those African nations, a healthy dollop of early medieval Islamism, complete with the accompanying pathologies of misogyny, homophobia, antisemitism, anti-Christianity, anti-Hinduism, and anti-anything-Westernism (except, of course, very pro our welfare system). Why in the world would any sane modern country want to allow mass migration from those places via chain immigration and visa lotteries? Europe and England, which long since left sanity far behind, give us a graphic illustration of the end point for insane immigration policies.

Saying this does not mean that a humane nation that believes in infusing itself with immigrants should ban people from some of the world’s worst countries. But shouldn’t we get to pick whether we invite in a hard-working, pro-American family man or woman versus having thrust upon us the MS-13 gang member who’s related to a whole passel of other MS-13 gang members already living here or the Islamic fundamentalist who wins a random lottery and brings in his wake 30 equally fanatic family members?

The reality is that in shithole countries, there are (sadly) a lot of people who are not only of no benefit to America, they cause active harm when they come here. Let’s not forget how illegal immigrants commit crime vastly disproportionate to their numbers and how immigrants from rural and Islamist hellholes, whether legal or illegal, are completely over-represented when it comes to sex crimes against children. (And I’m too lazy too look up a link for either of those claims but, if you make the effort, you will see that I am correct.) And none of the above even touches upon the economic costs they inflict on America. (And again, you can find the links if you wish.)

.@realDonaldTrump, your mouth is the foulest shithole in the world. With what authority do you proclaim who’s welcome in America and who’s not. America’s greatness is built on diversity, or have you forgotten your immigrant background, Donald?

If Mexico is not a country in deep doo-doo, why are your compatriots so desperate to come to America? How about you focus on Making Mexico Great Again so that it can keep its own citizens, rather than having them desperate to escape its poverty and corruption?

Incidentally, so far as I know, Trump didn’t specifically identify Mexico. It’s interesting that, hearing the phrase “shithole countries,” Fox promptly thinks of his own country.

I think Trump is being entirely American. The reality is that none of the “shithole” countries to Trump refers are suffering urgent, immediate or imminent crises (unless you count in that category the financial nightmare the Clinton Foundation inflicted on Haiti). Instead, all of them are chronically damaged countries, suffering from corrupt governance and dysfunctional cultures. Nowhere in America’s Constitution does it say that our country has to put itself in danger or in poverty to save those countries from having to repair themselves.

The fact is that nowhere in our Constitution are we mandated to take in any immigrants at all. We did early in American history because it was to our benefit. If it’s not to our benefit any more, we are free to change that policy. As it is, we know with absolutely certainty that the only reason the Left fanatically espouses unlimited immigration, and the more debased the better, is because people who identify with America and its values vote Republican, while those who come here for the welfare vote Democrat. In other words, the policies against which Trump is valiantly fighting do not benefit our country or our citizens; they benefit Democrats who dream of a perpetual power base that allows them to turn American into EU West.

3. As long as the corrupt leaders and sick societies in shithole countries know that they can use America as their sewage spillover, they have no incentive to address their own failures. I’ve blogged for years about the fact that Mexico’s government needs illegal immigration into America so that it can continue its corrupt ways, get rid of some of its worst criminals, and keep desperately needed dollars flowing into its economy. We are enabling a sick society and we need to stop doing so.

This is not about being anti-Mexican or anti-Haitian (although I am anti-Islamist, and loud and proud about it). It is about saying that America is not the world’s garbage can. Moreover, as long as corrupt countries are allowed to treat us that we, they get an endless pass on cleaning up after themselves.

I’m sure there’s more to say, but those are my three main points. I have no doubt whatsoever that, outside of the usual hysterics in America’s geographically isolated Blue Zones, most Americans are in complete agreement with President Trump, even if they dislike his crude language.

We can choose to continue to be a nation that invites in immigrants, because that flow of new blood revitalizes us. But we must be a nation that has a specific say in which immigrants we allow in. That say, of course, should not be made upon racist grounds. However, it can and should be predicated upon certain baseline requirements, such as freedom from contagious diseases (and do remember the sudden epidemics of rare childhood diseases when Obama illegally opened the borders wide to “children” ranging in age from 5 to 30), freedom from gang affiliations and other criminal activity, and freedom from anti-American values and associations.

Once again, Trump shows his worth by speaking for Americans, instead of for some transnational elite that, comfortably safe in its walled-off communities, visits dangerous physical and ideological pestilences on the rest of us. Please President Trump — continue to Make America Great Again.