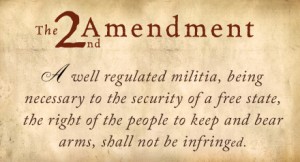 Facing the silly Proggies on Facebook. I always avoid my real-me Facebook page in the days after a much-publicized shooting (the media is drawn to shootings involving white kids in the suburbs as opposed to black kids in the ghettos), because I simply can’t stand the hate, ignorance, and hysteria. Occasionally, though, I try to introduce a little rationality into their discussions.

For example, when my Proggie friends simultaneously demand gun control while pointing to a story about how some enterprising reporter bought a gun illegally, I ask them if they have a better idea than gun control. It’s at that point that they say the Second Amendment isn’t an individual right, something I shut down by pointing to the Heller decision. That usually ends with nasty remarks about Justice Scalia.

A lot of my gun-control Proggies post memes about the wonders of restricted gun ownership in other countries, with those posts always ending with some line about gun ownership being a privilege, not a right. If I still feel like engaging, I’ll remind them that, in the U.S., the Second Amendment means that gun ownership is a right, not a privilege. They hate that point.

And so, inevitably, we get to where my Proggie friends really want to go: Full repeal of the Second Amendment, followed by confiscating all guns in private hands.

To one man, a Jewish man, I said that, since he was obviously not evil, I was surprised that he wanted to reduce Jews to the same position they were in when they faced genocidal Nazis, all armed with guns, between 1933-1945. He responded by snarking at me that he thanked God he wasn’t a Canadian blindly loyal to the Second Amendment. I told him that I thanked God too that he was a Canadian and wouldn’t be voting in any American elections. Canadians, I said, are to sheep-like, remaining convinced, all evidence to the contrary, that government is always good and will always protect them.

I don’t persuade anybody, but I do hope I cause people to think, at least a little bit. Thinking, as opposed to mindlessly repeating, can be the first stop on the road to abandoning bad or stupid ideas. At the very least, I want Proggies to be honest about the fact that they don’t believe in gun control and don’t really want it. They want to do away with guns entirely by repealing the Second Amendment without doing the hard work of actually repealing it. As Charles C.W. Cooke essentially said, bring it on.

A further thought about super valuable children. My post yesterday posited that we live in a unique historical time that sees middle-class white children as more than usually precious to their parents. No matter how loving parents were in the past, that was always tempered by a fatalism that said that some children will die (not may die) before their parents. It’s no coincidence that, for hundreds of years, American children said as their bedtime prayer, “Now I lay me down to sleep; I pray the Lord my soul to keep; and if I die before I wake, I pray the Lord my soul to take.” That is not an optimist’s prayer.

My brother-in-law pointed out, though, that the killers may not be thinking about hurting the parents. They just want to hurt the other children. There’s a sort of fierce emotional socialism behind that thinking that also relates to hyper-precious American children.

These maladjusted killers, who either come from unloving homes or are too emotionally damaged to feel loved, want their peers to suffer as they do. “I’m not loved and I’m not going to let you be loved.” It is, as Churchill said of socialism, the equal sharing of misery. In past times, when there was more emotional distance between parents and children (even loving parents and loved children), the chasm between damaged children and their peers might not have been so large and obvious to those damaged children.

Sometimes posters sum it all up; and sometimes they’re just stupid. Here is a pro-Second Amendment poster that sums it all up:

And sometimes posters are really dumb, insofar as they fail to distinguish between categories except in the basest, most racist way:

We can of course divide things by race (or, in the case of Muslims, by faux-racial label because Proggies are too simplistic to understand the difference between ideology and race) or, if we’re not a useful idiot Proggie, we can dig a little deeper.

Was the Muslim mass murderer someone who killed his entire family when his wife demanded a divorce or did he shoot up a military base or gay dance club while screaming “Allahu Akbar”? And if the latter, was he raised in a country that actively supports radical Islam or was he tied to foreign radical Islamists? If he was an Allahu Akbar murderer drawing ideological support from a foreign country, by all means let’s sever access as much as possible between that country and ours. So yes, TRAVEL BANS to keep more radical Islamists from pouring into our country.

Was the Hispanic murderer in this country legally or illegally? If the latter, the mass murder would never have happened but for America’s failure to enforce its immigration laws. Some of that failure comes about because, for eight years, we had an administration that refused to abide by its own laws. However, part of that failure is because we have a difficult border to manage. More than a decade ago, both parties in Congress agreed that we could manage that border — and perhaps prevent unnecessary American deaths by keeping out people who would never have been allowed in legally — by building a wall. So yes, BUILD A WALL to stop illegal murders (most of whom are Hispanic and not Dutch).

If you answered yes to any of these questions, each of which sees Democrats foreclosing policies that would help make Black communities safer, while then yes, MORE COPS AND PRISONS is the only remaining alternative. That is, if you aggressively deny people the opportunity to be their best selves, you are going to have to police and imprison their worst selves.

So that’s a really, really stupid poster based upon the racist and uninformed assumptions that underlie it.

Why are transgenders accommodated instead of treated? Those whom we call “transgenders” are people who have a form of body dysmorphia that sees their brains believing that the attached body is the wrong sex. Thus, a boy will feel that his body ought to be a girl body and a girl will feel that her body ought to be a boy body. It seems to me that the most simple way to treat this dysmorphia in the first instance is to give the boy male hormones and the girl female hormones. Theoretically, the correct hormones should feminize the girl’s brain to accept her girl’s body and masculinize the boy’s brain to accept his boy’s body.

Except that’s not what our medical establishment does or our cultural establishment demands. Instead, in the first instance, we give the boy hormones for women that atrophy his male sex organizes, make him sterile, make him grow breasts, and put him at risk of cancer. To top it off, we cut off his penis and testicles and give him breast implants, the latter of which women often complain create their own serious problems.

Likewise, in the first instance, we give the girls hormones for men that render her permanently sterile and that increase her risk of cancer. To top it off, we cut off her breasts and surgically affix some weird faux-penis to her body.

Unless someone can tell me that giving body dysmorphics increased hormones tied to their actual biological gender has been tried and invariably failed, I am at a loss to understand why we don’t approach this type of dysmorphia by using hormonal realignment instead of dangerous, destructive gender reassignment.