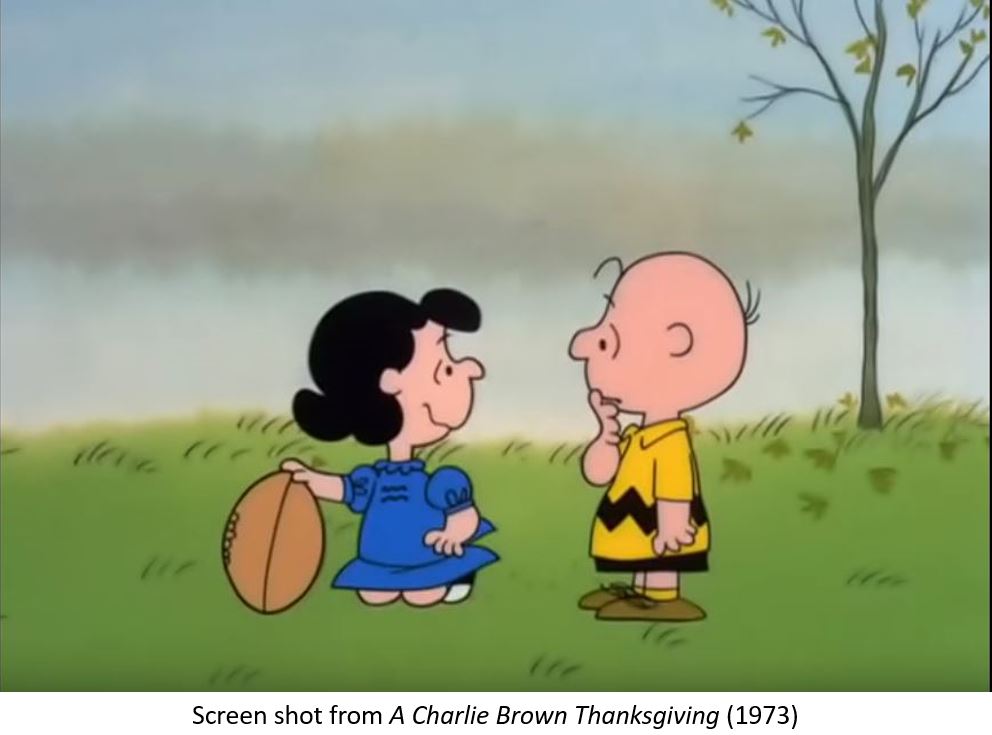 Seeing my Proggie friends’ “ecstasy and agony” cycle after the MSM’s many false claims that Trump is done, reminds me of Charlie Brown, Lucy, and football.

On Facebook, for the last two days, my Progressive friends have been all aflutter about stories saying that the Trump White House is in chaos. It can be summed up best with a tweet from Steve Hely.

But before I get to the tweet, you probably should know where Steve Hely is coming from, because he is the quintessential media-oriented Leftist. Hely is a comedy writer who worked on The Late Show With David Letterman, The Office, and 30 Rock.

Hely also has a blog. In one post, he had this to say about the excitement of Daytona racing:

Dawned on me that a reason men love sports is the emotions are so intense inhibitions break down and they can express love and tenderness for each other.  (War too?)

To illustrate this thought, he included a very moving picture of one soldier consoling another soldier during the Korean War:

To save you having to follow his link, it’s to a Huffington Post article that’s tremendously excited about the ramifications of a gay lip lock at the recent Olympics. As for me, I don’t like people who create neologisms by appending the word “cis” to the normal bell curve of human sexual behavior. This is not meant to be a rant against people who occupy the long-tail ends of that bell curve. I have no animus towards them. It’s simply to say that I don’t accept the pretense that, on the human sexuality bell curve, the ginormous bump in the middle is the same as the long-tail on the end — and adding “cis” to words doesn’t change that reality.

Now that you know where Hely’s coming from (very PC, whether or not he’s gay himself), I give you a moment to appreciate his tweet:

“Feels like it’s finally starting to unravel.” – what I’ve thought about the Trump presidency since minute two of inaugural address

It’s the dream that never dies. Let me take a small detour again before I get to my main point about that tweet and my Proggie friends. I ask you, is this an unraveling presidency?

With unprecedented speed, the Trump administration has already implemented nearly two-thirds of the 334 agenda items called for by the Heritage Foundation, a pace faster than former President Reagan who embraced the conservative think tank’s legendary “Mandate for Leadership” blueprint.

“We’re blown away,” Binion said in an interview. Trump, he said, “is very active, very conservative, and very effective.”

What’s more, he said, Trump hasn’t just focused on one agenda area, but he and his team has pushed through administrative moves on foreign policy, deregulation, immigration, tax reform and health care, moves often ignored by the media.

“It is a huge volume that his administration has worked on and it is a huge spectrum of issues,” said Binion.

His report card jibes with one from the West Wing which showed at the end of the year that the administration has scored 81 major achievements slashed at least 11 major legacy items of former President Barack Obama.

Together, the policy wins are adding up to a reelection agenda. “It is absolutely a winning agenda,” said Binion.

Arguably, despite the facts on the ground, one can forgive Hely’s current insane optimism (which mirrors the attitude of everyone else on my Facebook page). After all, since November 2016, America’s MSM (Mostly Socialist Media) has been assuring its audience that Trump is insane, that he’s evil, that he’s incompetent, that he’s corrupt, and that any minute now . . . really, any minute, Mueller is going to strike the knockout blow.

But it’s not happening.

It was reading that tweet that made me suddenly realize what the Proggie “ecstasy and agony” scenario reminds me of: The media is Lucy (although, unlike Lucy, it believes its lies) and America’s Proggies are Charlie Brown. For the past 16 months, they have been endlessly playing out the quintessential Charlie Brown scenario: Lucy promises, absolutely promises, that this time she’ll hold the football for Charlie Brown to kick and every time, every single fricking time, Charlie Brown believes her, only to find himself lying on his back, dazed, and staring at the sky.

Of course, Charlie Brown is smarter than the Proggies. As the above video reminds us, both before his insane, unreasoning moment of blind optimism, and after the inevitable, painful fall, he always berates himself for being stupid enough to believe Lucy. The Proggies, on the other hand, keep lying there and wondering what happened, only to assure themselves that it can’t possibly happen again. The only thing sweeter than this delusion is the Leftist tears they shed every time Trump again emerges from the claimed wreckage, just like some movie Superhero striding confidently out from the building he brought down around his head while destroying the bad guy within.

(To those of you wondering, I know I’m tempting the gods with this post, but the analogy was too perfect for me to ignore. Send up an extra prayer for Trump tonight, just in case.)