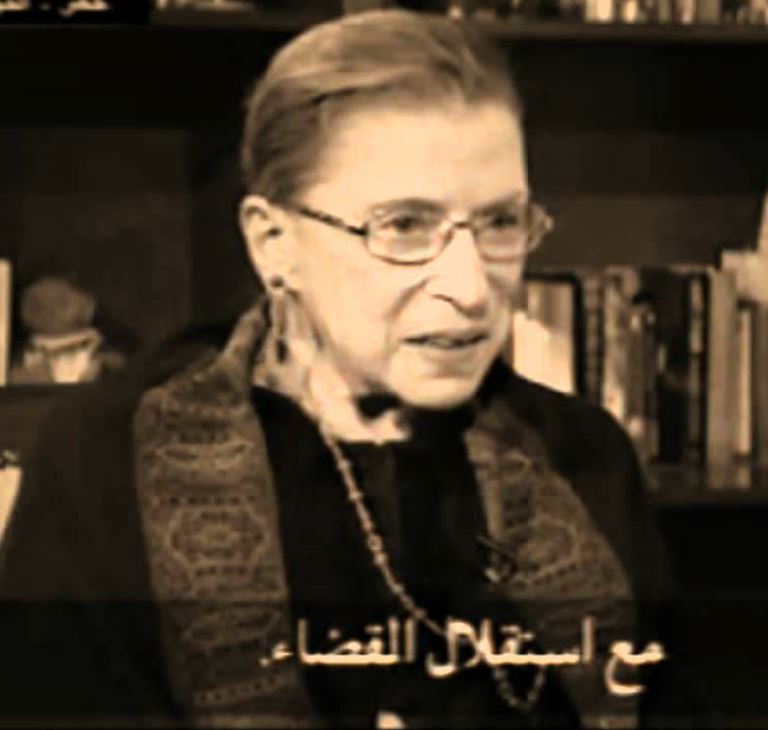 Events in South Africa today reveal that the Progressives’ adored Ruth Bader Ginsburg is a moral and constitutional moron, not a brilliant Leftist avatar. 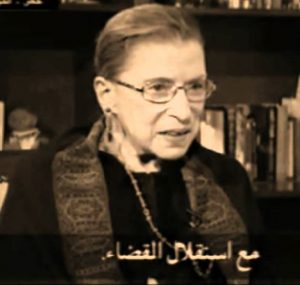 hit the New York Times bestseller list. The Times review of the book was adulatory, not just of the book, of course, but of “RBG” herself:

For 80 of her 82 years, the Supreme Court justice was known for being brilliant, reserved and a little dry.

Notorious R.B.G. refers to Notorious B.I.G., the young rapper who was killed in 1997. The unlikely comparison gave Ginsburg’s fans the perfect vehicle for turning her precise lawyerly voice into a cultural roar. Along with her Brooklyn-Jewish origins and five-foot-tall stature, Ginsburg supplied a vociferous dissent, in a 5-to-4 decision that dismantled a key provision of the Voting Rights Act. Tossing out the law’s protection against discrimination when it was working, she wrote, “is like throwing away your umbrella in a rainstorm because you are not getting wet.” It’s the kind of plain-spoken analogy that makes the work of the court come alive. Ginsburg offered another pithy one-liner, in the same term, when she criticized the government for treating same-sex marriage as “skim-milk marriage,” by denying gay couples federal tax benefits.

Did you get all that? Brilliant. Principled.

In 2014, the Supreme Court issued its Hobby Lobby decision, in which it held that closely held for-profit corporations can be exempted from regulations on religious grounds provided that there is a less restrictive way to further the law’s goals. Needless to say, Progressives were not happy with the decision, but they took comfort from Ginsburg’s “brilliant” dissent, even while going in for the kill about her selfish careerism:

[I]f you’re determined to find the silver lining, you could find some comfort that the latest landmark ruling from the court’s conservative majority gave Justice Ruth Bader Ginsburg another chance to solidify her position as a liberal hero with another fiery dissent.

Yet while the growing cult of the Notorious RBG is a well-deserved testament to her brilliance as a jurist and talent as a writer, it ignores an uncomfortable reality about this current moment in the politics of the Supreme Court. Namely, the celebrations of her brilliance fail to recognize that the best thing Ruth Bader Ginsburg could do for the liberal movement right now is, arguably, to call an end to a sterling and trailblazing legal career and step down from the court.

My own opinion of Ginsburg is different. I’ve been reading Ginsburg decisions since she ascended to the Supreme Court in 1993. I’ve found them consistently boring and, often, dishonest. There’s never a single blatant falsehood, of course. Instead, she weaves together a tangled skein of dozens or even hundreds of decisions to create an outcome none of these precedents contemplated. It’s “A + B + C + almost infinity = carrots.” I always dreaded it when my research forced me into reading one of her cases. Putting aside her occasional cute, clever phrases and labored analogies, I usually struggled with a huge pile of intellectual junk.

Considering my low opinion of Ginsburg’s intellect, and my increasing awareness that she was using the Supreme Court as a vehicle to destroy incrementally core constitutional concepts, I wasn’t surprised about the “helpful” advice she offered Egyptians in 2012, when they were drafting a new constitution:

As Egyptian officials prepare to send to trial 19 American democracy and rights workers, Supreme Court Justice Ruth Bader Ginsburg visited Cairo last week where she suggested Egyptian revolutionaries not use the U.S. Constitution as a model in the post-Arab Spring.

“I would not look to the U.S. Constitution, if I were drafting a constitution in the year 2012,” Ginsburg said in an interview on Al Hayat television last Wednesday. “I might look at the constitution of South Africa. That was a deliberate attempt to have a fundamental instrument of government that embraced basic human rights, have an independent judiciary. It really is, I think, a great piece of work that was done.”

Ginsburg also extolled several aspects of the document, particularly the separation of powers, the concept of checks and balances and an independent judiciary that can’t have its salaries diminished if it rules a law enacted by Congress as unconstitutional.

But asked about models for the Egyptian people, Ginsburg said Egyptians “should certainly be aided by all the constitution-writing that has gone on since the end of World War II.”

She then pointed not only to South Africa’s constitution, but to Canada’s 1982 Charter of Rights and Freedoms and the European Convention on Human Rights.

“Why not take advantage of what is else there in the world? I’m a very strong believer in listening and learning from others,” Ginsburg added.

Indeed, Ginsburg’s comments are not foreign to her overall philosophy. The justice has previously stated that she weighs foreign law as well as U.S. law when forming a legal opinion.

As to that last, I would argue that, unless you’re looking at the British common law that preceded America’s inception, Ginsburg’s dependence on foreign authority is unconstitutional and should all along have been an impeachable offense.

I thought of Ginsburg’s support for foreign constitutions, especially South Africa’s, last month when I read about the plans South Africa’s new president, Cyrus Ramaphosa, has for the white farmers who are the economic backbone of South Africa. (And yes, I’m only getting to the issue now, despite a month having passed. Sometimes I procrastinate.)

Yesterday Ramaphosa addressed the nation’s parliament in Cape Town and made clear that his priority is to heal the divisions and injustice of the past, going all the way back to the original European colonists in the 1600s taking land from the indigenous tribes.

Ramaphosa called this “original sin”, and stated that he wants to see “the return of the land to the people from whom it was taken… to heal the divisions of the past.”

How does he plan on doing that?

“The expropriation of land without compensation is envisaged as one of the measuresthat we will use to accelerate redistribution of land to black South Africans.”

Ramaphosa minced no words: he’s talking about taking land from white farmers and giving it to black South Africans.

Astonishingly, he followed up that statement by saying, “We will handle it in a way that is not going to damage our economy. . .”

Wow, what a relief. For a minute it sounded like South Africa wants to do what Zimbabwe did several years ago.

That’s exactly what Zimbabwe did. (Emphasis in original.)

My suggestion to those white South African farmers is to get out while they can. Once the seizures begin, they’ll be lucky if they can take any assets with them, assuming they’re allowed to leave and aren’t imprisoned or executed for the sins of the forefathers.

I’m not particularly interested in South Africa. It’s going the way of all African nations into socialized destruction and despair. Frankly, I might be more sympathetic to them were it not for their virulent hostility to Israel.

History shows that nations that are hostile to Israel don’t fare well. The religious might say this is God’s hand. I say that those nations who hate Israel and the Jews do so because they hate that Jews are, as Dennis Prager says, the world’s conscience.

I would make the same point a bit differently: The Jewish Bible, no matter how imperfectly humans have at times interpreted it, stands for the principle that we are all God’s children, created in his image, and that there are inviolable abstract concepts of justice and morality that apply to all people. Those who violate those religious imperatives create tyrannies that, after subjecting their people to miserable torture, inevitably collapse.

Enough about South Africa. I wrote here to note that the notorious — and “brilliant,” “heroic,” “sterling”, and “trailblazing” — Ruth Bader Ginsburg is a practical and moral moron. Daily reality demonstrates how utterly vacuous and foolish she was in 2012 to elevate the South African constitution over the American one.

What this most-adored Supreme Court justice could not understand then (and probably doesn’t understand now) is that the other, non-American, constitutions she loves so much are massive procedural documents explaining how the government can “give” out “rights,” all the while assuming that it won’t take those illusory “rights” away again. Only the American constitution has the wisdom to say that our rights our inherent. The government cannot “give” them to us and woe betide the government that takes them.

And for those who want a short version of a long post, here’s a poster I put together (click on image twice to enlarge but be warned that it will take you to a new window): 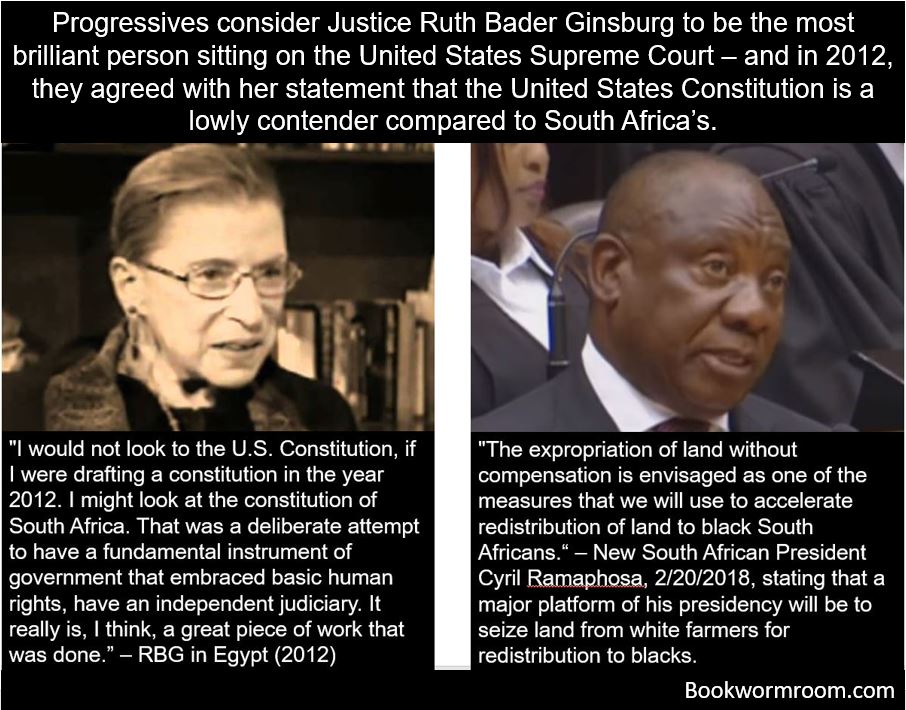 UPDATE: This kind of thing is why I don’t care much for South Africa: