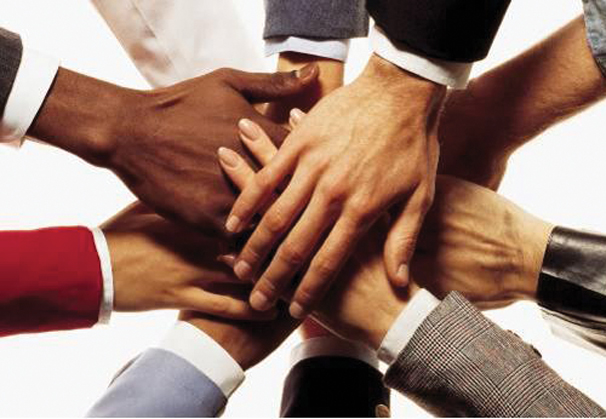 A few photos show that, while the Left preaches racial and gender diversity, it’s actually conservatives who truly embrace it –and for the best reasons.

The Left loves to hector conservatives for being white — white privilege, white supremacy, white hegemony, toxic whiteness, etc. They also like to claim that all this white thought comes from (ick) men — toxic masculinity, dead white men, white men who ought to be dead, etc.

The fact that the Left is operating from a place of terrible hypocrisy is irrelevant to the Leftists. What’s important is that they can keep blacks voting Democrat by contending that Leftists are the party of diversity, while conservatives are not. The same holds true for their insistence that conservatives have no room for women, so all correct thinking women should vote Democrat.

It’s certainly true that, on the street or at the DNC, there are a lot of black and female faces. Here’s an SEIU protest in New Orleans, for example:

And here’s a crowd shot at the 2016 DNC convention, although it does trend male, I think:

What’s fascinating, though, is that the “thought leaders” at outlets such as Huffington Post, the New York Times, and the Washington Post are all remarkably . . . er, pale:

Notice anything about this @HuffingtonPost editors meeting? 💃💃💪🏼💪🏼 pic.twitter.com/7sg4SyraPa

(They’re not kidding, though, about being women friendly, are there? They’ve managed to kick out men entirely.)

At the New York Times the diversity hypocrisy is so extreme that its own public editor felt compelled to point it out:

ONLY two of the 20-plus reporters who covered the presidential campaign for The New York Times were black. None were Latino or Asian. That’s less diversity than you’ll find in Donald Trump’s cabinet thus far. Of The Times’s newly named White House team, all six are white, as is most everyone in the Washington bureau.

Traveling to other departments, Metro has only three Latinos among its 42 reporters, in a city with the second largest Hispanic population in the country. Sports has one Asian man, two Hispanics and no African-Americans among its 21 reporters, yet blacks are plentiful among the teams they cover and the audience they serve. In the Styles section, every writer is white, while American culture is anything but.

The executive editor, Dean Baquet, is African-American. The other editors on his masthead are white. The staff with the most diversity? The news assistants, who mostly do administrative jobs and get paid the least.

The Washington Post had the same problem, of course.

In other words, on the Left, when it comes to racial and gender diversity, the thought leaders are preaching, but they sure aren’t practicing.

I thought of that when I looked at the columnist line-up for today’s Townhall, a line-up I preserved with a screenshot:

Let me sum it up:

Yeah, there are a lot of white men, but I also see more diversity than at the Huffington Post, which criticized conservatives from the confines of its all-white, all-female editorial board. At Townhall, as at other conservative sites, if you follow the roster from day-to-day, women and men from different races and belief systems show up as thought-leaders.

What ties this truly diverse group of people together is that they believe in the Constitution, they believe in the free (and fair) market, and they believe in individual rights and liberty. Other than that, they are not drones marching in lockstep. In addition to racial and gender diversity, they also present true diversity of ideas and opinions.

From where I’m sitting, conservatives practice what hypocritical Leftists preach.