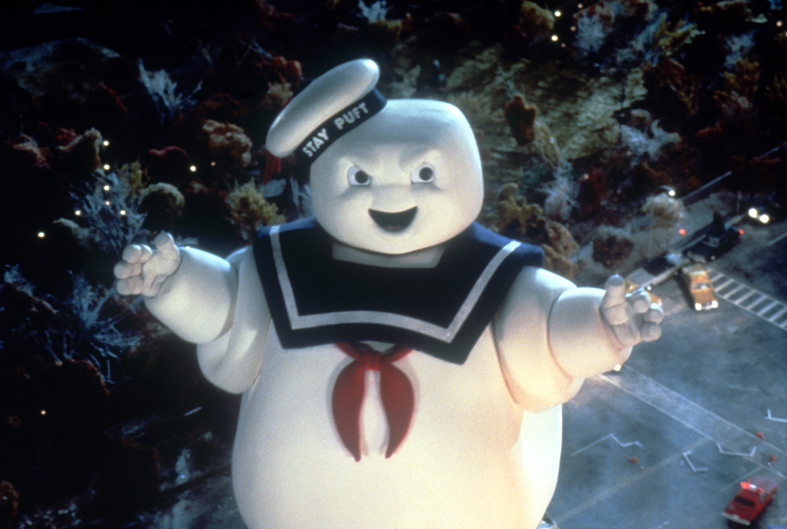 Ben Shapiro’s insight that the media created Donald Trump reminds me of nothing so much as the Stay Puft Marshmallow Man in Ghostbusters.

It’s no secret that Ben Shapiro does not like Donald Trump. Shapiro, a refined type himself, really struggles to see past Trump’s vulgarity and the constant dodging and weaving of someone for whom everything is a negotiation. Still, Shapiro is an honest man, and he recently acknowledged that Trump is the most conservative president in his lifetime:

.@benshapiro: “[President @realDonaldTrump is] the most conservative president in my lifetime through his first 500 days.” #TheStory pic.twitter.com/hH5lRlvZBn

The above clip reveals that Shapiro has yet to figure out that Trump’s rhetoric is not wild, but tightly controlled, and is part of his power. But that’s not what I want to talk about. I want to talk about one other thing that Ben Shapiro said in an article he recently wrote. Shapiro thinks, and I agree, that it was reasonable to believe when Trump, a lifetime Democrat and a social liberal, started campaigning, the he would have governed as a centrist or even as a soft Leftist. Certainly that’s what most conservatives worried about when they thought of President Trump. I wouldn’t denigrate Trump as Shapiro does, but he’s right about the fact that a warm Democrat embrace would have resulted in a very different Trump presidency:

Democrats had a massive opportunity when Trump was elected. As an ideological nonconformist and a reactionary personality, Trump seems particularly susceptible to praise and flattery. Imagine if Senate Minority Leader Chuck Schumer (D., N.Y.) and House Minority Leader Nancy Pelosi (D., Calif.) had strolled into the Oval Office during the first week of Trump’s presidency, sidled up to Trump, and told him that they’d love to impose indelible change on America by granting everyone comprehensive health care. There’s a decent shot that with the help of then–White House chief strategist Steve Bannon, Trump would have gone full Bernie Sanders. That isn’t complete speculation — in September 2017, Trump went over the heads of congressional Republicans in favor of working with Schumer and Pelosi to avoid a government shutdown.

Democrats, though, were so invested in Hillary, and so reflexively hostile to anything Republican, that they went in an entirely different direction. First, they ridiculed Trump:

Second, in keeping with their mantra that Trump was too stupid to live, they simultaneously tried their darndest to keep him in the game. Lefties in politics and the media (but I repeat myself) were certain that, the more people saw of Trump, the more they’d realize that Hillary was the only candidate worth voting for.

And that gets me to the Stay Puft Marshmallow man. I’m going to assume that everyone reading this is familiar with the original 1984 Ghostbusters movie. (If you haven’t, here be spoilers.) As you may recall, when Gozer, the Sumerian god comes to New York, ready to destroy the city, Gozer tells the Ghostbuster team that they will choose the form of their “destructor”:

I couldn’t find video of the dialogue immediately following the above scene, so here it is, written out:

Peter Venkman: Oh, I get it! I get it. Oh! Very cute. [to the others] “Whatever we think of.” If we think of J. Edgar Hoover, J. Edgar Hoover will appear and destroy us, okay? So empty your heads. Empty your heads. Don’t think of anything. We’ve only got one shot at this.
Gozer the Gozerian: The choice is made!
Peter Venkman: Whoa! Hold on! Whoa!
Gozer the Gozerian: The Traveler has come!
Peter Venkman: Nobody “choosed” anything! [turns to Egon] Did you choose anything?
Egon Spengler: No.
Peter Venkman: [to Winston] Did you?!
Winston Zeddemore: My mind is totally blank.
Peter Venkman: I didn’t choose anything! [All three slowly turn to confront Ray]
Ray Stantz: I couldn’t help it. It just popped in there.
Peter Venkman: [sternly] What? What “just popped in there”?
Ray Stantz: I– I-I tried to think–

And then comes this classic movie moment:

The analogy is obvious. Trump is the Democrat Party’s Stay Puft Marshmallow man. He is the “destructor” that they chose.

In the movie, the happy ending is that the ghostbusters work together to destroy their destructor. In real life, though, we’re getting quite a different ending.

For the last year-and-a-half, the Democrats have indeed been working together in the hope that they’ll destroy the Trump destructor that they created. In fact, though, they have succeeded in destroying themselves. What Ben Shapiro misses when he complains about Trump’s style is that Trump is carefully, and quite deliberately, messing with the Leftists, which encourages them to reveal their worst face.

I’m going to switch here from analogizing to silly movies and, instead, analogize to a charming novel. And because I’m lazy, I’m going to quote from a post I wrote about six months ago:

Trump is extraordinarily adept at baiting the media into intemperate behavior that shows the media at its worst — even if there’s some underlying virtue underlying the media’s position. And what does this remind me of? A Georgette Heyer novel, of course.

The novel, one of my favorites, is The Nonesuch

. The book’s plot is the usual comedy of manners that Heyer handles with a touch as deft as Jane Austen’s, tempered only by a more modern sensibility. Here’s the quick rundown:

Ancilla is an intelligent, accomplished young gentlewoman with a strong sense of self worth and a good sense of humor (making her more empowered than the American women born of the Women’s Liberation Movement). Owing to her family’s impoverishment, instead of becoming a charge on her family she’s chosen to work as a governess. Ancilla has two charges: her employer’s daughter and her employer’s niece. The niece, Tiffany, is an extremely wealthy, staggeringly beautiful, selfish young woman who is charming when happy and a termagant when crossed. It takes very little to cross Tiffany.

Sir Waldo Hawkridge comes into the town to set up an orphanage, as he is charitably inclined. He’s quite modest, so he keeps secret the reason for his coming. The gentry in the town have no interest, in any event, in exploring his motives for visiting. He is “The Nonesuch,” meaning that, when it comes to looks, wealth, athletic ability, and charm, there is none such as Sir Waldo. The only person unimpressed is Ancilla, who erroneously believes him to be a dissolute gambler, which he is not. The meat of this delightful story involves Sir Waldo’s efforts to woo Ancilla.

One of the engines driving the romance is the fact that Sir Waldo’s cousin Lord Lindeth, a sweet-natured young man, has accompanied him. Unfortunately, Lord Lindeth spots Tiffany in a charming moment and falls head over heels in love with her. Both Ancilla and Sir Waldo wish to nip this passion in the bud, because both understand that Tiffany is poison for any man unlucky enough to marry her, notwithstanding her wealth and beauty.

Of course, the easiest way to end the affair is for Tiffany to show her worst side to Lindeth. Ancilla, though, struggles with this notion. On the one hand, she wants to save Lindeth from a terrible fate; on the other hand, Tiffany is in her charge and it goes against the grain for her to encourage bad behavior. Fortunately, Sir Waldo has no such constraints . . . and this is the point at which I finally bring the story back to Donald Trump.

Sir Waldo deliberately baits Tiffany by “sort of” flirting with her, which is very bad behavior coming from an older man of the “ton” (i.e., Britain’s uppermost class). Not only that, he blows hot and cold, alternately plying her with fulsome compliments and dismissing her with subtle, but vicious, put-downs. Tiffany, unaccustomed to being played, cannot control herself. She becomes both vicious and hysterical, even though it should be obvious to her that she is shattering her reputation in the eyes of the young men around her, including Lindeth.

Trump, believe it or not, rude, crude, Trump, is playing the role of handsome, suave, talented Sir Waldo. Those who are not blinded by hate know that Trump, a savvy businessman and reality-TV star, is perfectly capable of controlling himself if he wishes. When it comes to the media, that’s not his wish.

Like Sir Waldo, Trump is deliberately engaging in provocative behavior because he knows that the media, a collection of spoiled Tiffanys, will be unable to control itself. Moreover, he understands that, once it’s lost control, the media’s bad behavior — it’s lies, insults, hysterics, and manifest bias — will drown out any improper conduct on his part.

Because I understand what Trump is doing, and I see how well it’s working, I’m not bothered by Trump’s Twitter excesses or his off-the-cuff comments. He is using high-level persuasion here. As he proved during the campaign, he understands that it’s irrelevant if he makes himself look clumsy or crude, provided that he makes his opponents look stupid, vicious, biased, and hate-filled.

If Trump were keeping points, he would award himself double or triple points when his opponents, in their rage, don’t remember to train their fire on Trump alone but, instead, turn it on his supporters as well. Hillary’s unforced “Deplorables” error is a perfect example of a winning round for Trump.

Watching the media get destroyed by their chosen destructor, I’m watching a very happy documentary play out before me.