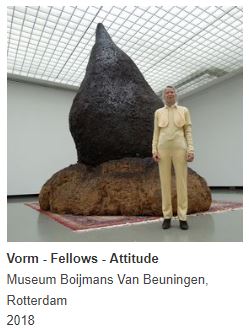 The European artists who created a poop exhibit in Holland aren’t American Progressives but they’re consistent with the Leftist love of all things fecal.

It was a mere two days ago that I did a post entitled A new entry in my ongoing Progressive Party of Poop Series. Then, just yesterday, the New York Times had an article in the Arts Section entitled In This Exhibition, You Walk Through Excrement. It begins as follows:

ROTTERDAM, the Netherlands — When I entered the exhibition, I was invited to get nude. I searched a clothes rack filled with skin-toned “naked costumes” featuring all shapes and sizes of male and female genitalia, and chose a peach-color hermaphroditic garment, with teddy-bear fur, a male member between its legs and wide-set breasts. I pulled it on over my clothes.

Then I walked into the excrement.

There were four giant turds inside the 16,000 square feet of museum space. One mammoth piece of feces was reminiscent of a long, winding steel sculpture by Richard Serra. One was a brown spiral. Another resembled an enormous chocolate chip. Yet another featured intertwined layers with a gap in between that I could have crawled through, if I had been brave enough.

All four sculptures of fecal matter sat on elegant Persian rugs, like welcome-home gifts left by a huge, vengeful dog.

You can see the links in my earlier post about Progressive poop fixations to learn my theories about the primitive, immature Leftist brain. Suffice to say that this outburst from leftists in Holland simply supports my theories.