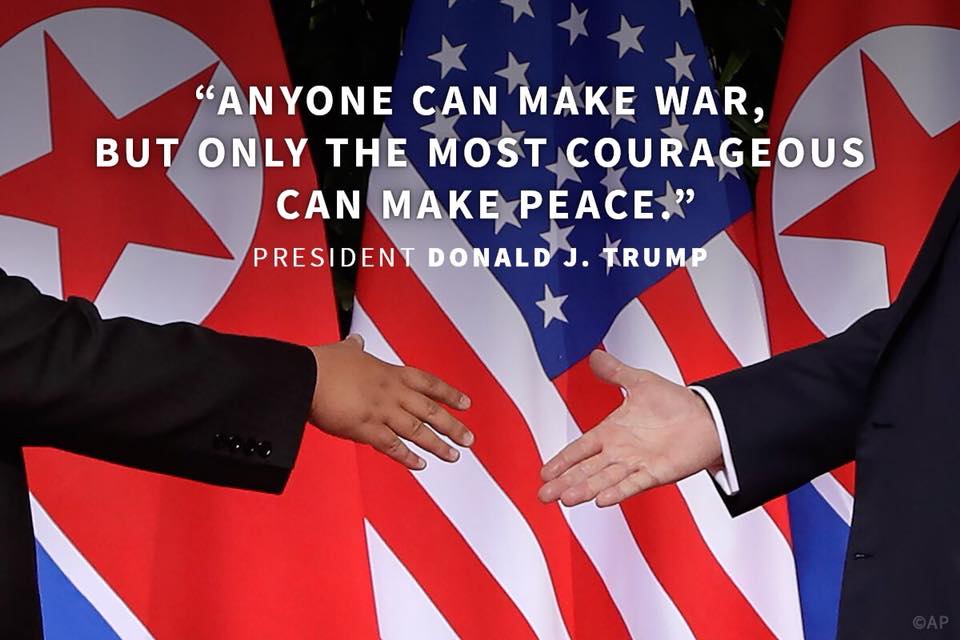 The video that Trump showed to Kim Jong Un is a direct challenge to Obama’s Marxist predestination; it promises the triumph of great men with free will. As Obama made repeatedly clear, he believed that has a “right” side that will inevitably unfold if the world implements Obama’s policies. History also has a “wrong” side, which means doing anything counter to President Obama’s beliefs about how the world should be run. I won’t bore you with his “wrong” side critiques, but I find it quite instructive to see assembled in one place all his “right side of history” statements he made during his presidency:

It’s easy to lead from behind if you already know where the parade is going to end.

As with all things Obama, there’s nothing original in his “right side of history” idea. It’s simply a shorthand for Marxist historical predetermination. If you believe in Marxist theory and act accordingly, history is already written, with the winners (the proletariat and their wise leaders) and the losers (anyone who gets in the winners’ way on this march to predestined future history). Murray Rothbard explains:

Thus, to be moral means to be “progressive,” to be in tune with the inevitable future workings of the laws of history, whereas the harshest condemnation is reserved for those who are “reactionary,” who dare to obstruct, even with partial success, such allegedly predestined turns of events. Thus Marxists are particularly vehement in denouncing revolutionary moments in which the existing rule of “progressives” is replaced by “reactionaries,” and the clock is, miraculously, in the metaphor of historicist inevitability, “turned back.” For example: the Franco revolution against the Spanish republic, and Pinochet’s overthrow of Allende in Chile.

But if a certain change is truly inevitable, why is it important for human agency to lend a hand, indeed to struggle mightily on its behalf? Here we turn to the critical matter of timing. While a change may be inevitable, the intervention of man can and will speed up this most desired of happenings. Man can function, in one of Marx’s favorite obstetrical metaphors, as a “midwife” of history. [Footnote omitted.] Man’s intervention could give the inevitable a helpful push.

Obama couldn’t have put it better himself. Marxist historic predestination holds that the world is moving in an inevitable direction that will see pure Marxism dominate. Still, it helps to have a midwife and Obama saw himself in that role. As he understood things, when future history is finally written, historians will say that Obama, with his exquisite understanding of Marxist dynamics, midwifed this inevitable future into being. In other words, the Marxist baby was always going to be born, with Obama’s greatness lying in the fact that he took rigorous steps to ensure a swift, safe birth.

Thankfully, Obama is no longer president. In his rush to be on “the right side of history,” he committed a variety of political sins, including but not limited to:

Obama’s acts may have been “right” for Marxist predestination, but they were a lousy deal for the American people and for liberty-loving people around the globe.

Now that Obama (thankfully) has finally become part of the history he kept anticipating, it’s reasonable to ask why I’m bringing him up in this post and, moreover, doing so at such great length. The answer is that the video that President Trump showed Kim Jong Un reveals that our past and our current president could not be more different in their understanding of their role and of history.

To reiterate, Obama sees history as already written (predestined), with his sole job being to accelerate the inevitable. And then there’s Trump. President Trump sees the future as unwritten. There are myriad paths the world can take and it behooves the bold and creative leader to take a path most likely to result, not in an inevitable outcome, but in the best possible outcome. This is the triumph of individual free will over Marxist predestination. People matter. They’re not just mindless cogs driven by Marx’s fatally flawed economic understanding.

Seven billion people inhabit planet Earth. Of those alive today, only a small number will leave a lasting impact. And only the very few will make decisions or take actions that renew their homeland and change the course of history.

History may appear to repeat itself for generations, cycles that never seem to end. There have been times of relative peace, and times of great tension. While this cycle repeats, the light of prosperity and innovation has burned bright for most of the world.

History is always evolving, and there comes a time when only a few are called upon to make a difference. But the question is, what difference will the few make?

The past doesn’t have to be the future. Out of the darkness can come the light. And the light of hope can burn bright.

What if, a people that share a common and rich heritage, can find a common future? Their story is well known, but what will be their sequel?

Destiny Pictures presents a story of opportunity. A new story, a new beginning. One of peace. Two men, two leaders, one destiny.

A story about a special moment in time, when a man is presented with one chance that may never be repeated. What will he choose? To show vision and leadership? Or not?

There can only be two results: one of moving back, or one of moving forward. A new world can begin today. One of friendship, respect, and goodwill.

Be part of that world, where the doors of opportunity are ready to be opened, investment from around the world, where you can have medical breakthroughs, an abundance of resources, innovative technology, and new discoveries.

Can history be changed? Will the world embrace this change? And when can this moment in history begin?

It comes down to a choice. On this day. In this time. At this moment.

The world will be watching, listening, anticipating, hoping. Will this leader choose to advance his country and be part of a new world? Be the hero of his people? Will he shake the hand of peace and enjoy prosperity like he has never seen?

A great life? Or more isolation? Which path will be chosen?

Featuring President Donald Trump and Chairman Kim Jong Un, in a meeting to remake history. To shine in the sun.

One moment, one choice, what if?

The future remains to be written.

Those references to “history” in a video that Trump certainly approved and perhaps helped write reveal the opposite of Marxist predeterminism, which sees a “great man” defined merely as the one who speeds the inevitable. Instead, Trump’s video articulates the “great man” theory of history in a free world. This approach holds that history is something we see in the rear view mirror, not something we predict and, indeed, write in advance. Instead, free people make choices as we stand the millions of crossroads throughout our lives.

The more powerful the people making these choices, the greater their ability to effect changes that will be historically noteworthy. We act in the present; we hope that the future looks back on these acts with approval.

Trump is offering Kim Jong Un, a man steeped in Marxism yet raised in the West, the opportunity to get off a dead-end Marxist historic predestination treadmill and, instead, to create something entirely new and unanticipated. He’s saying to Kim, “Don’t just strut like a great man; BE a great man.”

We are at a very exciting time in the world in large part because Trump, unlike the Leftists who helmed American from 1993 through 2000 and from 2009 through 2016, understands that real change comes from seizing the moment, rather than using a script drawn from history books that have yet to be written.

I can think of two ways to end this post, so I’ll do both. The first way to end this post is to suggest that you view Scott Adams 18-minute-long video raving about how brilliantly persuasive the Trump summit video is. I agree — and I would add only that part of the persuasion is that Trump has abandoned stale, failed Marxist predestination in favor of the exciting possibilities inherent in the free will, great man school of history:

The second ending is a poem that I learned in fifth grade and have never forgotten, Robert Frost’s The Road Not Taken. Obama, constrained by his Marxist vision of a predestined future, could not take any but predestined roads. Trump, notwithstanding all the advice given him by experts steeped in the same rut of historic predestination, took a different road, and that may make all the difference:

Two roads diverged in a yellow wood,
And sorry I could not travel both
And be one traveler, long I stood
And looked down one as far as I could
To where it bent in the undergrowth;

Then took the other, as just as fair,
And having perhaps the better claim,
Because it was grassy and wanted wear;
Though as for that the passing there
Had worn them really about the same,

And both that morning equally lay
In leaves no step had trodden black.
Oh, I kept the first for another day!
Yet knowing how way leads on to way,
I doubted if I should ever come back.

I shall be telling this with a sigh
Somewhere ages and ages hence:
Two roads diverged in a wood, and I—
I took the one less traveled by,
And that has made all the difference.