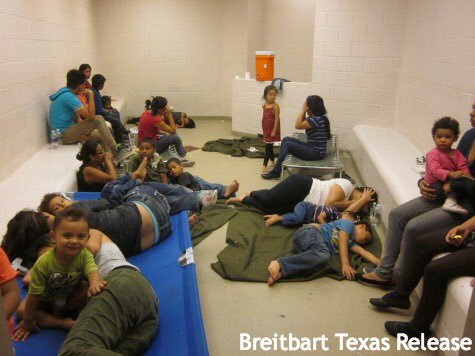 I am not ignoring you, dear friends. It’s just that I’m in the midst of a perfect storm: both kids home, work from clients, and planning for a trip. I’ve been going from dawn to dusk, making only small inroads in my to-do list — which means blogging (sadly) becomes a low priority.

I’ll be away for a couple of weeks, but will try blogging whenever I get the internet. I’ve also asked a few friends to guest blog, but they are busy people, so I make no promises on their behalf.

In the meantime, because immigration is a hot issue again, please consider this an open thread. I won’t be able to police the comments, but I do trust that, no matter how strenuous your disagreements, you’ll all debate in a polite and civilized fashion, without obscenities, threats, or insults. After all, I only get the highest caliber of people here, so high level behavior should be as easy as breathing.

My views on the children kerfuffle haven’t changed: This is (a) intended to divert attention from Trump’s success with economics and foreign policy; (b) to weaken his presidency; and (c) to create an open border policy. I’ve been saying for at least a decade that the Left likes to use children as the thin edge of the wedge. Of course, they ignore the children hurt by their policies: the ones killed by illegal immigrants; the ones whose parents are killed by illegal immigrants; and the ones whose families are less well off because illegal immigrants skew the economy, especially amongst poor people.

This hysteria also ignores the fact that, when people are arrested, they are always separated from their children. There are a few choices: incarcerate the children with the parents, which is incredibly dangerous for the children; throw the children on the street, which we stopped doing in Victorian times; put them in foster homes as we do for children whose parents are arrested for domestic crimes; or (and this is the Democrats’ dream) simply release into America all illegal aliens who have children attached to their side, something that destroys our border and that is an invitation to child trafficking.

Let’s also note the number of children of active duty military (and reserve military) who find themselves without their parents for long, long stretches of time.

Don’t worry, the Republicans, and your President, will fix it! pic.twitter.com/xsbuPzXbHj