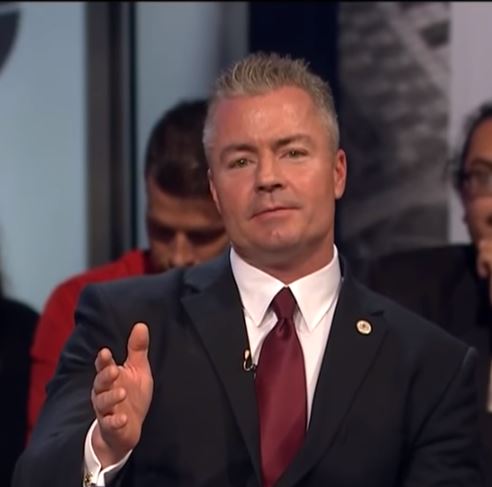 With the California Democrat Party having disavowed Dianne Feinstein, it’s time to shake things up with a Travis Allen write-in campaign for U.S. Senate.

News broke today that Dianne Feinstein, a Democrat who has represented California in the United States Senate for 26 years, is no longer the darling of the California Democrat party. The problem is that DiFi, although she’s been trying to keep up with her party’s shift to the Left, still has some vestigial common sense. There’s no place for that in today’s “democratic socialist” Democrat party. It therefore shouldn’t have come as a surprise to DiFi that the party ditched her:

In backing de Leon, a majority of the party’s 360-member executive board ignored Feinstein’s calls to stay neutral in the race. Her allies had warned an endorsement would only further divide Democrats.

The final vote margin was lopsided: A total of 217 delegates voted for de Leon, of Los Angeles, or nearly 65 percent of the delegates. Meanwhile, only 22, or 7 percent, cast ballots for Feinstein and 94, or nearly 30 percent, voted for no endorsement.

Why? Because there is no Republican senatorial candidate on the ballot. I explained this disgraceful, anti-democratic situation years ago, when California turned the November race into nothing more than a run-off election:

The point of the primary system is to give citizens who are members of a specific political party the opportunity to pick that candidate who best represents their views. Then, in the Fall season, those cherry-picked party candidates get to go head-to-head, giving voters a genuine ideological choice. This is important even in states that tilt heavily in one direction or the other, because it means that, when voters are actually paying attention, they are exposed to more than just the majority party’s viewpoint.

The obvious effect of an Open Primary is to stifle turnout from the minority party. For example, if the Senate race were the only thing I the ballot, I might not bother to vote in November. I don’t care whether Feinstein or de Leon wins — although I actually favor de Leon slightly. I think voters across America should get an eyeful of the crazy that is modern Leftism. To the extent DiFi is still slightly sane, people might actually think the modern Democrat party has some meaning and relevance beyond racism, dhimmitude, anti-Americanism, and blind hatred.

This year, though, in California, there’s the cuckoo in the nest that may well see Republicans turning out to vote in significant numbers: Republican John Cox managed to winkle his way on the gubernatorial ballot, and will be facing off against Leftist darling Gavin Newsom.

Newsom, a Getty protegé, is kind of pretty and makes Gov. Jerry “Moonbeam” Brown look almost as sane as DiFi. Newsom gained national renown a decade ago when he was mayor of San Francisco (the fecal City by the Bay) and issued marriage licenses to gay couples in San Francisco. The media framed it as a major act of civil disobedience but, given that Newsom didn’t end up a martyr to his cause but became instead (as he knew would be the case) a new star, I was less impressed by his lawless conduct.

Anyway, my point before I digress too much is that conservatives will be showing up at the polls in November to cast a vote for John Cox. Meanwhile, when it comes to the vote for California’s U.S. Senator, there’ll be some disarray on the Democrat side of the aisle. DiFi, with her war chest and name recognition, is still the favorite to win, but she’s also a dinosaur who will be 90 when her term ends. Meanwhile, the young de Leon may be too far Left even for many California Democrats.

It therefore occurred to me that there’s an opportunity here for a write-in candidate for California’s U.S. Senate seat. This works, though, only if California’s conservatives (and any #WalkAway voters who have had it with California’s increasingly abnormal one-party rule) settle on the same candidate. A million different names is meaningless; one name is powerful and could even win.

My vote for this one name is Travis Allen. He’s a rock-solid conservative, dynamic, intelligent, quick-thinking, patriotic, law-abiding, and all other good things, including being a good, old-fashioned Happy Warrior in the Reagan mold. Allen made a good showing for the governor’s race, although the more establishment Cox won the second spot on the primary ballot (and you can be I’ll be voting for him in November). You can read more on my take about Travis Allen here.

With almost four months to go, I’m hereby inaugurating the official #TravisAllenWriteIn campaign for the California seat in the U.S. Senate. Even if we can’t leverage Democrat disarray into a win, we California conservatives can still make a strong statement by writing Travis Allen’s name in for U.S. Senator. I have to believe that there are a lot of us who would prefer to see this young dynamo in the Senate rather than either a Democrat dinosaur who will have to pull left to remain viable or an out-and-out Marxist who changed his name to take advantage of racial identity politics.