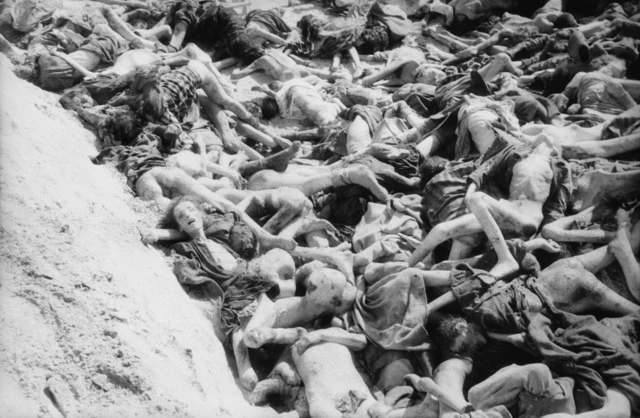 What is it that we are remembering on Holocaust Remembrance Day?  Is is just a day of mourning, or is it a warning as well?

I am sure there is not a one of us unaware of slaughter of the seven million innocent Jews and several million other undesirables by the Nazis as part of their Final Solution.  But few of us are ever forced beyond the superficial knowledge of those facts.

Ms. BWR is one step removed the Holocaust and can tell the stories of her father who escaped it, other of her family and her parent’s friends who survived, and others of the same ilk who did not survive it.  Her “remembrance” on this day is without doubt exponentially different from mine and most other people, who only read of the Holocaust in school, seeing the occasional anodyne picture of the horrors.  We know intellectually that what happened was evil, but not emotionally — not viscerally.

And unfortunately, without something to trigger the visceral emotional response of horror to what happened, it is hard to get to the other purpose, I think, of Holocaust Remembrance Day and that is to recognize the danger of evil and the danger of governments with enough power to effectuate that evil on a grand scale, leaving mountains of bodies in their wake.

Holocaust Remembrance Day focuses on that evil in relation to the Jews, perhaps the most persecuted people in history.  For much of our history, that is because the Jews made the perfect scapegoats in largely tribal societies — they were a very insular minority that refused to bow down and eschew their religion regardless of the pressure placed upon them.  Can anyone doubt that scapegoating such people and using that as justification to carry out murderous pogroms against them was evil.  In a sense, Holocaust Remembrance Day should have us contemplating our historic treatment of the Jews, for Hitler’s Final Solution was no or more less evil than the Jew hatred and bloody slaughters of old.  Rather the Final Solution was the natural culmination of it all,  a horror that Hitler was able to effectuate on an industrial scale simply because of the power his government had accumulated, his disarming of the Jews, and the technology of his era.

Certainly one of the things we should recognize on Holocaust Remembrance Day is that the danger for Jews to suffer yet another Holocaust is well imaginable in our lifetimes.  Murderous Jew hatred could not be more alive and well amongst many in the Muslim world.  Muslim triumphalists want to see all non-Muslim faiths wiped out, but the Jews are and have always been first on their list.  The Muslims simply have never had the power to make it happen — yet.  Does anyone doubt the truth of the rather dark joke going around, that if you take away all of the guns from all of Muslims in the Middle East, you would see no more war there, but take the guns away from all of the Jews and you would see no more Israel there.

And I think there is a secondary lesson from Holocaust Remembrance Day.  It is to remember the near certain danger of allowing any government to accumulate so much power that they can disarm the populace and, once disarmed, scapegoat and murder whatever pockets of them are necessary to advance the government’s agenda.  We’ve seen variants on that throughout the 20th century, where the rise of socialism ended in the mass murder of nearly a hundred million innocents.  We see it still today in places like Venezuela and Cuba, two of socialism’s last failed vestiges.

But now to come full circle.  As I wrote above, without something to trigger the visceral horror of what happened with the Holocaust, it is hard for one to fully appreciate the warnings that are part and parcel Holocaust Remembrance Day.  I’ve been fortunate enough — or perhaps unfortunate enough, depending on how you look at it — to have had an experience that triggered the visceral horror.

Many years ago, I visited the site of Bergen-Belsen Concentration Camp.  It was one of the most memorable and shocking experiences of my life.  On this Holocaust Remembrance Day, I include a post I wrote about that visit with minor edits:

The photo above is of a mass grave in the Bergen Belsen Concentration Camp. The camp was liberated by the British Army 70 years ago today on April 15, 1945, an act that is being commemorated in the news today.

NPR has the story of Bergen Belsen Through The Eyes Of Its Liberator. The Daily Mail has an article, Through The Gates Of Hell, that includes never before seen photos taken by British soldiers in 1945. Another article recounts the personal story of a survivor of the camp, “We Did Not Know The Horror To Come.” Billie Halliday, a British expatriate, tells of the horrors he saw at Bergen Belsen in Langley veteran saw best and worst of humanity in WWII. Dennis Kilcommons, a journalist, discusses his own visit to Bergen Belsen forty years ago, an event that impacted on him in precisely the same way as my own visit there, discussed below, impacted on me.

Bergen Belsen was a spoke in the wheel of the Final Solution, Hitler’s plan to exterminate the Jews in Europe. The method was to gather Jews and other enemies of the state into concentration camps run by members of Hitler’s praetorian guard, the SS. Jews not murdered en mass in the camps were to be worked to death, forced to labor while on starvation diets.

The Third Reich’s Final Solution resulted in the murder of six million Jews, an event the world would later label the Holocaust. There were others sent to these concentration camps as well to suffer the same fate as the Jews – Gypsies, Eastern Europeans, homosexuals, political prisoners and captured Soviet soldiers. Several million of them also died in the Nazi concentration camps.

Bergen Belsen Concentration Camp was located in north central Germany. It was one of the less notable of the Nazi concentration camps. The camp did not have a Doctor Mengele to conduct sadistic experiments upon the inmates. Nor was the camp the scene of mass execution in gas chambers like at Auschwitz. Murder on an industrial scale at Bergen Belsen was much slower, though by no means less cruel, horrific, or evil than at the other camps. At Bergen Belsen, murder was brought about by systematic starvation and disease allowed to run rampant.

When the British liberated Bergen-Belsen on April 15, 1945, they brought in film crews and photographers to document the living hell that they found. The War Office tasked famed director Alfred Hitchcock to turn the footage into a documentary that, only years later, was released to the public. The first half of the documentary deals with Bergen Belsen, the second half with other camps, as well as Nazi execution of prisoners in the face of advancing American and British troops:

I am not Jewish. I had studied World War II in school, of course, and I was well aware of the horrors of Nazi concentration camps. I had seen the pictures and read the stories of Dachau and Auschwitz. But, as a young man, the horror and revulsion I felt was purely on an intellectual level.

I wasn’t even aware of Bergen Belsen until I found myself, two decades ago, driving past it while on assignment in the area. I had some time to spare, so we went into the site.

There was nothing left of the original buildings at Bergen Belsen by then. All of the camps buildings had been burned and leveled by the British in 1945. There were several buildings built on the site since to house memorials to the 70,000 Jews, Soviet prisoners of war, and other people who were murdered there. There were mementos in glass cases and thousands of horrible pictures lined the walls. It was indeed heartbreaking to see. And there were some exhibits given over to the most famous of the Bergen Belsen’s victims, Czech painter and writer Josef Čapek and the sisters, Margot and Anne Frank. 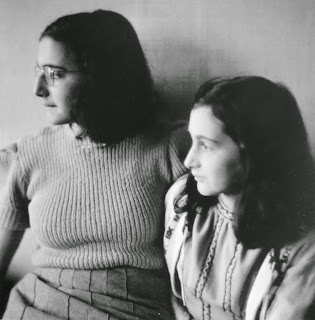 At some point, I stepped outside the memorial buildings and began to wander about. I came upon a series of about twenty rectangular grass plots raised up about a foot off the ground, each neatly lined by brick. They varied in size, but the largest I recall was about maybe 9 or 10 yards wide by maybe 20 yards long. Each plot had its own plaque standing next to it.

I wandered over to one plot and read the plaque. I don’t remember the exact numbers on that first plaque, but I remembered it said something like “7,000 people buried here.” I wandered to the next plot and read its plaque, and so on and so on. The smallest of the mass graves held the remains of about 1,500 people; the most was over 10,500.

As I read the plaques at each of these tiny mass graves, that is when the horror of it all became real. That is when I fully comprehended the evil that was committed there, and was able for the first time to comprehend the magnitude of its scale. There were no more numbers written on pages of books or pictures on a wall. These were tens of thousands of people, murdered and tossed one on top of another into the smallest possible holes imaginable; tens of thousands of murdered innocents but a few feet below where I stood. Most were not soldiers, but simple men, women and children who had done no wrong; vibrant people with families, people with lives that could have enriched the world. That moment of realization has haunted me ever since.

What is evil? Moral relativists will say that there is no such thing as evil, but they are are naive fools. No one who visits Bergen Belsen can come away believing that. Evil is easy enough to spot, just hard to articulate. The dictionary defines it as “profound immorality, wickedness, and depravity.” I think that close enough. I certainly saw that at Bergen Belsen and, there, for the first time in its presence, understood it.

I don’t think many people truly do – understand evil that is. It is hard until you see it first hand and feel its effects on a visceral level. Many of the WWII generation who are now dying off understood this evil. Many of them saw it first hand. They ended the genocidal evil that was Nazi Germany. And famously, they said “Never again.” We should all thank God that they did.