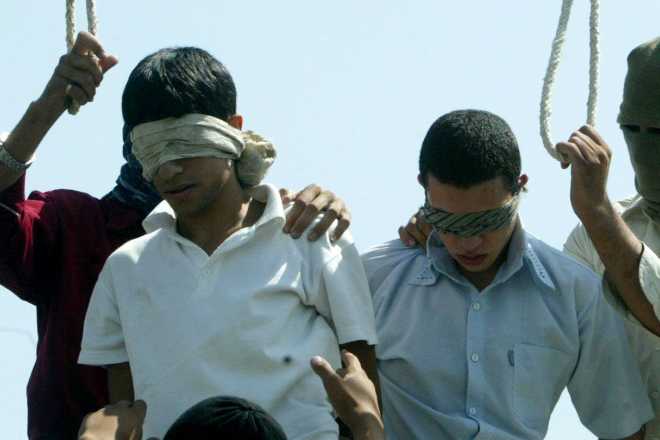 In 2005, Iran hanged Mahmoud Asgari, 16, and Ayaz Marhoni, 18, for engaging in homosexual sex (although the Iranian authorities tried to cover by claiming the boys were rapists).

Just to show that the above was not an aberration, in 2017 Iran again executed someone for being gay, this time Hassan Afshar, 19.

Iran executed these three young men because it follows strict Islamic law which, while affirmatively allowing sheep shtupping (as long as you don’t kill the little gal and eat her after sex, which is really baaaad form), imprisons, tortures, whips, and executes men for homosexual practices.

Just a couple of days ago, the Trump administration, led by Richard Grenell, its wonderful ambassador to Germany, who also happens to be gay, announced a new initiative to end the criminalization of homosexuality throughout the world. Most sane people think doing so is a good thing.

Here’s the $64,000 question, though: Are you sane if you suffer from Trump Derangement Syndrome? Don Surber makes a good argument, riffing off a Reddit comment, that you are not.

But if Don doesn’t persuade you, perhaps you’ll believe that TDS does in fact make people insane when you read an article from Out Magazine, one of the best known LGBT publications in America. The author, Mathew Rodriquez, argues that Trump’s effort push for a worldwide end criminalizing homosexuality is racist and that, really, it’s cool to be gay in Iran:

Rather than actually being about helping queer people around the world, the campaign looks more like another instance of the right using queer people as a pawn to amass power and enact its own agenda.

Homosexuality has been illegal in Iran since the theocratic 1979 Islamic Revolution. By at least one Guardian account, since the exit of president Mahmoud Ahmadinejad in 2013, enforcement of anti-gay laws has softened somewhat. Homosexuality, according to the writer, is an “open secret” and most queer people fear homophobic reaction from fellow citizens more than the authorities.

Grennell’s sudden interest in Iran’s anti-gay laws is strikingly similar to Trump’s rhetoric after the 2016 Pulse massacre in Orlando, Florida. After the deadly shooting, Trump used the 49 deaths as a way to galvanize support for an anti-Muslim agenda rather than find a way to support LGBTQ+ people. In pushing for immigration restrictions and a Muslim ban, Trump argued, he was the true pro-LGBTQ+ candidate. Rather than honor those who died, Trump used the tragedy as a way to stoke fear among the American people, and Grennell is taking similar actions with Iran — trying to reach an economic goal by painting the administration’s opponent as anti-gay.

The truth is, this is part of an old colonialist handbook. In her essay, “Can the Subaltern Speak?” postcolonial theorist Gayatri Spivak coined the term “White men saving brown women from brown men” to describe the racist, paternalistic process by which colonizing powers would decry the way men in power treated oppressed groups, like women, to justify attacking them. Spivak was referencing the British colonial agenda in India. But Grennell’s attack might be a case of white men trying to save brown gay men from brown straight men, to the same end.

The article goes on and on, a semi-coherent rant from someone who manifestly majored in Queer Studies and America hatred at college and who has been rendered incapable of making sense in the real world. It is a classic example of tribal notion that “the enemy of my enemy is my friend” — except that the first enemy in that formulation isn’t supposed to be trying to slaughter you, even as the second enemy in that formulation tries to save you.

If you’re a C.S. Lewis fan, you may remember a scene from The Last Battle, his parable about the Apocalypse. In that scene, although the dwarfs have survived Aslan’s judgment which allows some eternal life while consigning others to perdition, they are unable to appreciate their good fortune. Even though the dwarfs are sitting in a glorious sunlit field, they are convinced that they are in a dark and dirty shed. And when Aslan places a feast before them, they perceive it as disgusting refuse that they trample into the dirt as they fight each other.

For those whom Trump has driven mad, there is nothing he does that can be understood or appreciated. While we sane people glory in the sunshine of a president who works hard for Americans, who supercharges our economy, who strengths our borders, who may have sparked peace on the Korean peninsula, who recognizes Iran as a place of terrible evil, and who generally seeks to extend true freedom at home and abroad, those in the grips of Trump Derangement Syndrome are forever mired in a dark, smelly stable, eating dirt.